Another bedroom community with surprises, Higashikurume City naturally flies under the radar yet comes complete with culturally recognised sites and natural leanings, including a tremendous view of Mt. Fuji. Here is an introduction to some of the history and landmarks of Higashikurume City and how to reach them.

A recognised cultural property of the city, this Fudo Myo Statue sits in a deceptively normal residential rural-leaning backstreet. Erected towards the end of the Edo era in 1826, the statue features Sanskrit characters and sees the famous Buddhist deity surrounded in flame and holding a sword in his right hand and a rope in his left.

An 8-minute walk from Higashi-Kurume Station on the Seibu Ikebukuro Line.

Chosen as one of the 100 Views o Mt. Fuji from Kanto, the Fujimi Terrace is part of Higashi-Kurume Station. The viewing platform on the second floor offers a direct view west of the famous mountain and in chilly December, scores of photographers gather to take shots of the 'Diamond Fuji' image as the sun sets over the summit.

Direct access from Higashi-Kurume Station on the Seibu Ikebukuro Line.

The Ochigai Waterside Space offers up plenty of natural enjoyment with its crisp, clear waters and verdant greenery along its banks. Popular with the locals as a picnic spot, summer is a great time to visit with family as the water isn't all that deep and fish can be found swimming through.

A 9-minute walk from Higashi-Kurume Station on the Seibu Ikebukuro Line.

Recognised as an official Historic Site by the Tokyo government, Shimosato Honmura Iseki features remains from Japan's antiquity, including both Jomon and Yayoi periods. There is a small display space known as the Shimosato Honmure Remains Museum - a single room - close by where stone tools, clay vessels and the like can be seen.

A 7-minute no.21 bus ride from Higashi-Kurume Station on the Seibu-Ikebukuro Line. 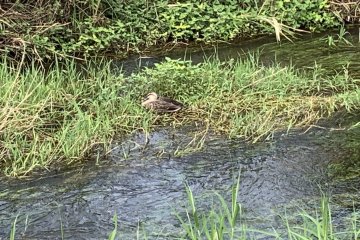