The front of Sushi no Midori. Note the two customers at the left where the ticketing machine is located to get your serving number (Photo: Mark Asao)

A great place for sushi in Shibuya

The front of Sushi no Midori. Note the two customers at the left where the ticketing machine is located to get your serving number (Photo: Mark Asao)
Mark Asao   Dec 03, 2018 - 5 min read

During our last visit to Tokyo in 2016, we were recommended to try this great little place in Shibuya, called 'Sushi no Midori'. Located along the food pathway at Mark City, we could easily find it. It was lunch time and we were hungry however, when looking at the long line up outside of the restaurant we were discouraged. We left and chose another place. This other place turned out to be disappointing and we regretted not giving 'Sushi no Midori' a try. Fast forward to our next visit, during the fall of 2018, we were still regretting our lack of patience. Therefore, we placed going to this restaurant at the top of our list and made a decision that we would wait no matter how long the line was.

We decided to go for dinner and the hallways at Mark City were flowing with business people making their way home. Outside of 'Sushi no Midori' was a line that was as long as on our last visit but we remained determined to wait this time. We were about to make our way to get a ticket when we were approached by another couple. They asked us if we were planning on eating there, to which we confirmed "Yes", and they handed us their ticket. This restaurant was currently serving customer 244 and the couple had obtained a ticket numbered 255. They said it was too long and they didn't want to wait and wished us a good meal, then made their way to search out another place to eat. While waiting we could see a line of people sitting on a bench outside. Occasionally, the host would grab the number sign and hold it up then shout out the next number. Usually, there wouldn't be any response so the next number would be called out. When observing this, we noticed that many people would pick a number but then get discouraged at the potential waiting time and leave. As a result, many numbers were skipped so we were called out and seated in just about 20 minutes. This was much quicker than we had expected.

When entering the restaurant we were lead inside and seated at a sushi bar. This area had some great seats which gave us a perfect view of the four Chef's crafting their master pieces. After viewing the menu that included an English explanation, we both ordered the Upper Sushi-Assortment with Soup. Served with green tea, they first brought us some 'Miso Soup' where we could watch our main meals being prepared. When the main meal was ready it was served on a wooden board, on top of a large leaf where each piece of sushi was placed creatively as if it was a work of art. This was not all just for show either as each piece was delicious! The sushi rice was nicely seasoned and fluffy while the fish was fresh and delicious. We were asked before receiving our order if we were ok with eating wasabi, (Japanese Horseradish). When eating our main dish, we both agreed that the amount of wasabi on our sushi was the perfect amount since it was not too over powering yet, perfectly enhanced the flavor of the fish. We were both very impressed with the fatty tuna, so much so that we each ordered an extra piece a la carte. Towards the end of our meal a server came by with new cups of green tea, removing our original cups. This was a very nice touch.

The Upper Sushi-Assortment with Soup was 1300 Yen. This includes 8 pieces of 'Nigiri' sushi and 6 pieces of small sushi roll. Our bill came to 3888 Yen, which we found to be fantastic for a meal of this quality. Their website states there are 62 seats comprised of places at the bar along with several tables. The staff here were very efficient in serving each customer quickly yet effectively. It was quite impressive to watch the plates being created one after the other. I am still amazed at how quickly they were able to cycle customers through, without compromising the quality of the meal and overall experience. It was easy to get our chef's attention to place our order and he spoke English. Everyone was friendly, from the host, to the chef, to the servers and even attendant at the cash register on our way out. This was a completely enjoyable experience.

The lesson learned here is that you should not be discouraged at what might appear to be a long line waiting outside a restaurant. Not everyone seated on the bench are waiting for the restaurant. Some have simply stopped there to rest or are seated for other reasons. Secondly, do not be discouraged at obtaining a ticket with a number that is way ahead of the current number that is being served. As we learned, many people leave so they end up skipping through many numbers. The machine to obtain this number is to the left of the door. Finally, the staff are very efficient in serving people quickly and the food is incredible. My only regret was not taking more pictures. This was because I happened to be caught up in the experience and enjoyed my meal so much. There is also a take out window where you can buy prepared packaged meals, located between the ticket machine and the entrance door if you do not have time to stay. 'Sushi no Midori' also accepts international credit cards where we used our Visa. We will ensure we stop by here again whenever we are in Tokyo

Located on the 4th level of Mark City at Shibuya Station.

I am a fourth generation Japanese Canadian residing just outside the Toronto area in Ontario, Canada.  Into my adulthood I have increasingly become more interested in my heritage.  From learning how to make some of the classic foods like sushi, to learning the language to learning more about Japa... 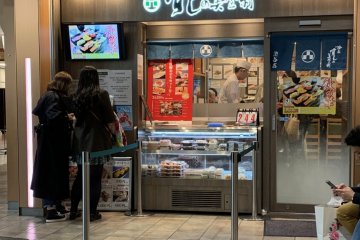 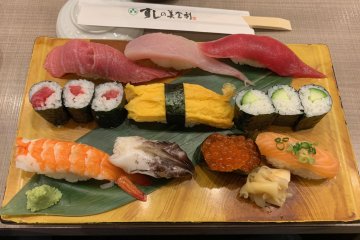