When I was a child my friends and I used to walk 10 kilometers to the Krispy Kreme factory in downtown Baltimore after we scraped our pocket change together because in those days they used to sell imperfect donuts for 25 cents per dozen from the back door. We would walk up to the back of the factory and the oldest boy would knock. A worker would eventually come with bags of donuts ready for us. I’m not sure how it all got started but we enjoyed every trip we made there. Now, 30 years later I drive 20 kilometers just to get a taste of that sweetness I remember from my childhood.

Several years ago I saw a news report about Krispy Kreme opening a store in Japan. People were lined up around the block for a taste of pure Americana. The first shops opened in Tokyo and boasted an hour long wait.

The easiest place to get Krispy Kreme donuts in the U.S. was the supermarket, but now in Japan it is just as easy to run to the nearest retail shop. At this point in Okayama, there is a shop in Kurashiki and Okayama City.

The Okayama shop is located on the west side of the second floor of Okayama Station on the terrace next to the bridge that leads you to the NHK and Digital Museum building. The iconic red and white Krispy Kreme sign sits among the multitude of patrons who clamor for the delights on offer. It was truly standing room only when I was there even though several years had passed since the initial fervor.

The glazed donut is the classic but there are dozens of creative varieties from chocolate to multi-colored sprinkles. I personally went for the party pack of 18 donuts for JPY1800 ($18). There is also an assortment of beverages to wash it all down.

I was at the shop over Golden Week and it was quite crowded. As the seating was limited, I opted for take-out. If you find yourself in this situation, there are several benches right outside on the terrace. From there you can enjoy a view that has come into existence with the rebirth of the west side of Okayama Station. 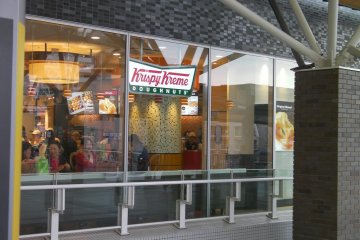 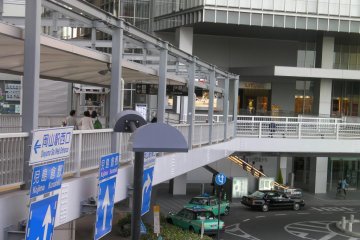 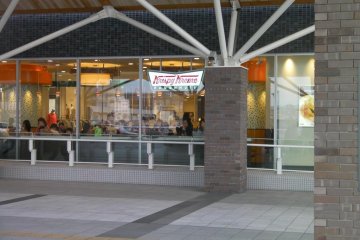