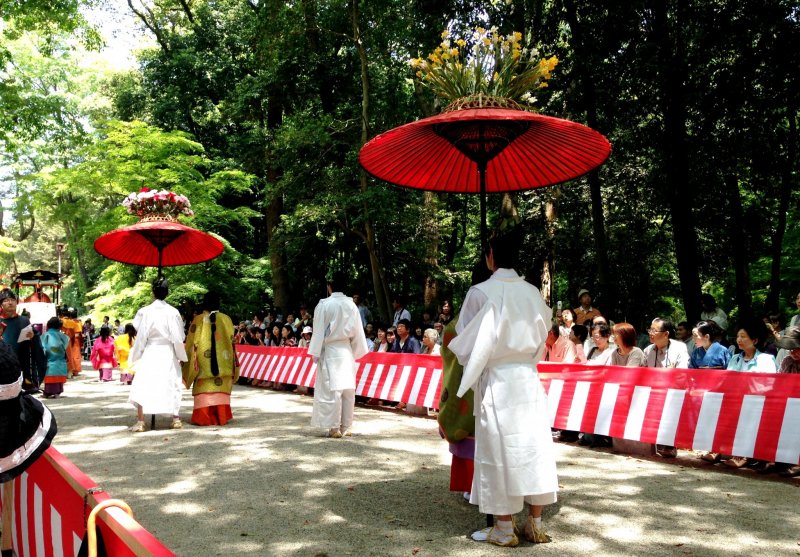 Relive the pageantry of the Kyoto court

It has been reported this event is cancelled for the current year — please check the official site for more details.

The Aoi Matsuri is one of the oldest and most celebrated parades in Japan. So much so, the word “Matsuri” originally referred only to the Aoi festival. Full of pageantry, the festival transforms the usually tranquil park and gardens into a big costume party, with people dressed in Heian period (794–1185) court regalia parading from the Imperial Palace. Full of pomp and occasion, it makes its way to the Shimagamo Shrine, where the townsfolk celebrate with dancing and games, like archery competitions and horse races. This festival is known as one of the big three festivals in Kyoto, the others being the Gion and Jidai festival, or the Festival of the Ages.

The history of Shimogawa Shrine predates the foundation of Kyoto itself. Established in the seventh century, it found a powerful patron in the Imperial court. The emperor’s daughter served here as a shrine maiden, its beautiful setting playing host to many a royal ceremony. One year the priests decorated the buildings with hollyhock. This was the forerunner to the Aoi Matsuri, or the Hollyhock Festival.

The best way to enjoy this parade is with paid seating at the Imperial Palace or the Shimagamo Shrine, where the setting is reminiscent of its historical origins. However it is free if you are happy to stand along the route.

The festival starts at the Imperial Palace at 10:30am, with the parade leaving the southern gate and then heading east and north to Shimagamo Shrine, it then continues to Kamigamo Shrine around 3pm.

Find out more about Kamigamo Shrine.