A harmony of home-made noodles and clear soup

Despite the fact that Tohichi only opened in March 2015, you can already taste the cook’s zest for making taste sensations with noodles and soups. In contrast to the many Ramen restaurants featuring thick or even potage-like soup along Higashi-Oji dori, the so-called ‘Ramen Street’ (Ramen Kaido), Tohichi serves its characteristic clear soup made from hand-picked ingredients.

From the outside, the restaurant itself looks just like any other fancy café. When you walk inside, the true and tried Ramen restaurant characteristics start to reveal themselves. First, you must buy a ticket from the ticket machine. Secondly there are no English menus; however, the staff are more than willing to help with any questions.

Their signature dish is the Tori-shoyu Ramen (750 yen). It is served in a qingtang or clear soup, carefully prepared from the best Jidori chicken. Also known as “chicken of the earth”, a robust native bred chicken known for its hearty flavor. The best exponents of Jidori are Kyoto’s Tamba Kurodori; a local black chicken, and Nagoya Cochin, both of which are showcased in this ramen. The soup is seasoned with Kiage-Shoyu, a soy sauce brewed in the traditional way using a wooden barrel and using selected beans to enhance its taste. Several types of aromatic Kiage-Shoyu are blended in Tohichi’s secret recipe. Naturally, the chicken and noodles prepared by the chefs are free of any artificial additives or preservatives.

Tori-shoyu Tsukesoba (800 yen) is another highlight. It is served in Kombu-sui, a broth prepared by immersing dried kelp in water for a few hours. First, enjoy it just with the accompanying salt and wasabi. This is a marvellous way of eating Tsukesoba! Then, from the second mouthful, try the noodles in the dipping sauce.

Also available are noodles like Tori-shoyu Tsukesoba (800 yen), Mazesoba (700 yen) and Tori-paitan (850 yen), as well as side dishes such as deep-fried chicken. Tori-paitan is limited to the first 15 orders during lunch and dinner, so come in early for this.

Mr Sodeoka, the owner and chef sporting short bleached hair, is constantly thinking of new ways to tempt your tastebuds. For example, noodles with a seafood-based broth are coming soon. Whatever you choose, you will surely be satisfied! But be warned, the afternoon queues on the weekend can be quite long. Still, it’s worth it!

Take route #1 bus from Shijo-Omiya or #Kita-8 bus from Kita-Oji Bus Terminal, and get off at Gentaku-shita. These are both Kyoto City Bus services, so you can use your Kyoto City bus day pass. They also have a number of paid parking spaces. 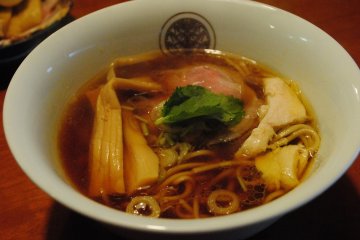 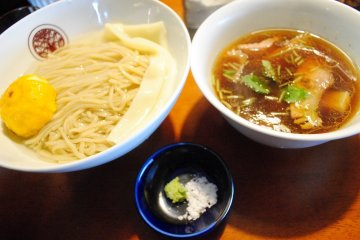 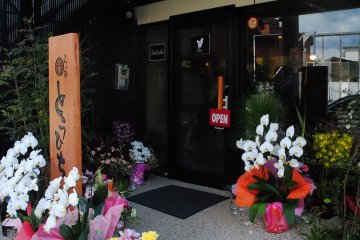 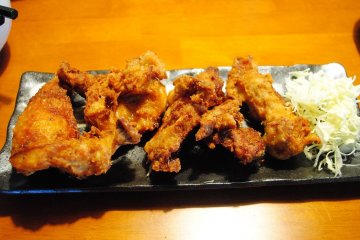 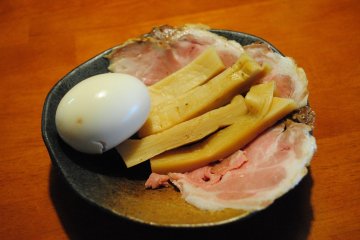