When Kobe with its eponymous steak is your neighbour, you have a lot to live up to in the beef department. Nishinomiya city's Awajishima Burger, however, matches up to its famous brother and then some.

Any self-respecting burger aficionado in the Kansai region will have been to, or at least heard of, Awajishima Burger. Some even journey several hours to devour their hamburgers.

I warn you now, dear reader, that if you decide to follow in the footsteps of burger pilgrims before you, not to judge the book by its cover. Why not? Well, Awajishima Burger is something of a humble establishment. To be more precise, it is a lean-to on the side of a petrol station. A corrugated iron roof keeps off sun and rain equally, and in winter thick plastic sheeting (otherwise known as the walls) keeps the worst of the wind out. With only five chairs to sit on there is often a line outside - though this includes many people waiting for take-away orders so don't be put off, the chef works fast!

The external appearance may deter restaurant snobs, but it will never put off a true burger fan. If patty, bun and fillings are more important to you than decor, this is the place for you!

As its name suggests, Awajishima Burger sources most of its ingredients from Hyogo prefecture's Awaji island. The island is most famous for its onions, and these are superbly sweet and crunchy in the burger. The juicy meat patty comes from Awaji cattle and, coupled with lettuce and tomato, makes for a mean meaty mouthful. But what makes the Awaji burger really special is the secret sauce, a fiercely guarded recipe. This sweet and tangy sauce ties the freshest of ingredients together into one of my absolute favourite burgers. When feeling particularly peckish you can even add extras such as bacon, onion rings or a fried egg to the burger, you can also order an extra large burger - or both!

Though you go for the burgers themselves, the sides should not be sneered at. Awajishima does very salty, very moreish fries and incredibly crisp onion rings - the latter run out really quickly so get there early. Of course it's all washed down nicely with a bottle of Hawaiian beer from one of the crates which act as extra seating. If you're still hungry, for an after-burger treat and better protection from the elements, try Arrow Tree for delectable desserts, one minute away en route back to the station.

Although certainly not fine dining, Awajishima Burger's use of fresh, high-quality produce, rustic charm and cheery service set it apart from its chain-store counterparts, one of which sits just 30 metres around the corner and never has a line! Word of mouth spreads Awajishima's good reputation and though it's not obvious from the outside what it is (unless there's a line) you can find it easily if you simply follow your nose to the onions from Nishinomiya JR station.

"The world is a book, and those who don't travel only read one page." Augustine of Hippo Originally from the perennially rainy north of England, I like eating out, travelling and clichéd quotes - Japan is a very big chapter in my world book. 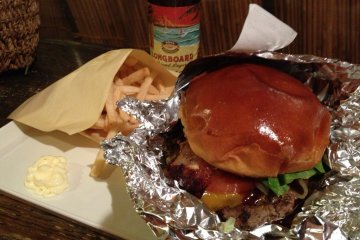 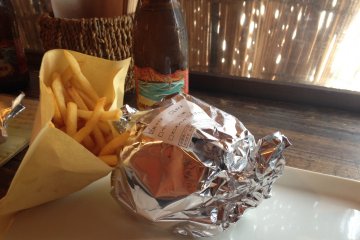 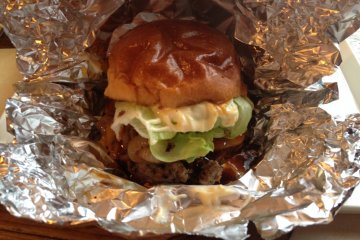 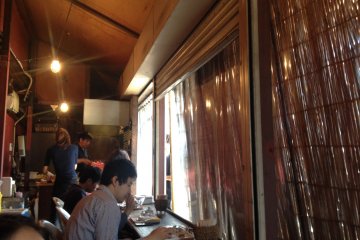