Japan's most important heritage listings can be found under the category of National Treasures but beneath that designation lies a series of other categories. The second of these categories is the Important Cultural Property one with Tokyo having its share of representatives on that list. Made up of several sub-categories, here is a simple guide to where Tokyo's Important Cultural Properties Buildings can be found.

Now home to the Mitsui Memorial Museum, this dignified structure was built in 1929, replacing the original headquarters of a financial and industrial powerhouse damaged in the Great Kanto Earthquake.

At almost 250m in length, Kachidoki Bridge was constructed in the 1940s and during its heyday day opened and closed 5 times per day to allow ships to pass through along the Sumida River.

Modelled after a similar bridge in Germany, Kiyosu Bridge was built in 1929 and along with its scenic views over Sumida River, was the first self-anchored chain suspension bridge in the country.

The first department store to be given such honours, the 1933-built Takashimaya Tokyo was the first store to use air-conditioning and its Renaissance-design managed to survive the bombing raids of World War II.

Built in 1934, Tsukuji Hongan-ji Temple and its Hondo Main Hall, full of eclectic cultural influences, was the first Indian-inspired Buddhist building in the country.

Now called the National Museum of Nature and Science, the building was rebuilt in 1931 and is one of the nation's largest such museums featuring a staggering 25,000 exhibits.

Home to a huge collection of National Treasures and now called the Tokyo National Museum, the building was rebuilt in 1937 after the Great Kanto Earthquake.

Central Tokyo's UNESCO World Heritage listing, the National Museum of Western Art was designed in 1959 by Le Corbusier and is part of his global collection of architecturally influential works.

A huge Edo period black gate of the Ikeda Clan, the Inshu-Ikeda Gate is now part of the Tokyo National Museum and is one of the very few remaining Edo period feudal domain gates remaining.

Relocated from Nara, the Jūrin-in Repository is log-built storehouse from the 12th-century that is now part of the Tokyo National Museum.

Designed by a Ministry of Communications architect in 1928, the Former Baba Family Ushigome Residence features a unique blend of both Japanese and Western design elements.

A 1927 auditorium built in Tudor Gothic style, the Okuma Memorial Hall of Waseda University features seating for over 1500 people along with a 38m-high clock tower.

Constructed between 1929, the opulent Western design of the Former Maeda Family Main Residence served the exceptionally wealthy Maeda Family in the 20th century.

The 1928 built Sonkeikaku Bunko is part of the Maeda Ikutokukai research centre and is made up of a library, archive, storage space and gate.

A former girls high school, the Jiyu Gakuen House of Tomorrow was built in 1921 and its harmonious horizontal design lends an open feeling to the building and surrounding grounds.

The Meiji Seimei Kan, built in 1934, was one of the first Western buildings to be completely designed by Japanese architects and the first Showa-era building to be awarded Important Cultural Property status.

Now the Tokyo Metropolitan Teien Art Museum, this 1933 building was once the private residence of Prince Asaka Yasuhiko and is renowned for its art-deco style and design. 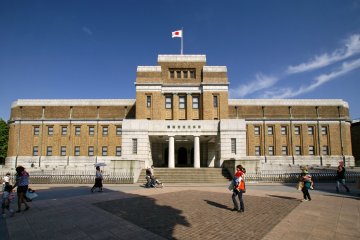 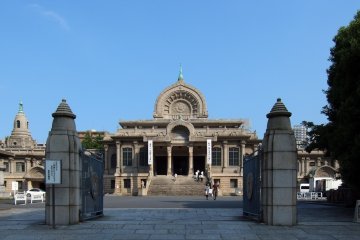 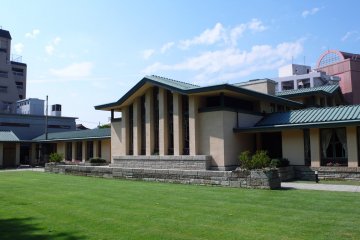