Pockets of heritage by the lake

Higashiyamato City is another Tokyo bedroom community blessed with some of the capital's most pristine environments. Though it is most famous for bordering the stunningly beautiful Tama Lake, the city's heritage includes feudal signposts, residences and folktale monuments. Here is an introduction to some of the history and landmarks of Higashiyamato City and how to reach them..

Designated as a Tangible Cultural Property, the Former Yoshioka Family Residence was built in the late 19th century as a storehouse for wealthy farmers of the Tama region. Later, in the mid-20th century, the building was used by artist Yoshioka Kenji who worked there until his passing in 1990.

A 4-minute walk from Musashi-Yamato Station on the Seibu Tamako Line.

A statue of a seated monk with two surprised men behind him, the Hi wo Futokoro ni Ireta Hoin-san represents the story of an ascetic Buddhist who calmly accepted a white hot ember of coal from some drunk men who were mocking him. Carved in 1995, the statue sits just by the carpark of a local assembly hall.

A 6-minute walk from Musashi-Yamato Station on the Seibu Tamako Line.

Located close to the walking trail by the Tamagawa Aqueduct, Kosei Cemetery is an extremely well-maintained location. Not the usual first stop for a visit, the cemetery nonetheless offers up some unique plots, including distinctive dome-shaped mausoleum designs and floral decorations.

A 1-minute walk from Tamagawa-Josui Station on the Seibu Hajima or Tama Monorail lines.

Recognised by the Tokyo government, the Zoshiki Kosatsu Ba is apparently one of two remaining Edo period bulletin boards. Used in to proclaim official laws, ordinances and prohibitions to the public, the board now stands next to the Zoshiki bus stop, belying its historical significance.

A 15-minute no.35 bus ride from Musashi-Yamato Station on the Seibu Tamako Line. 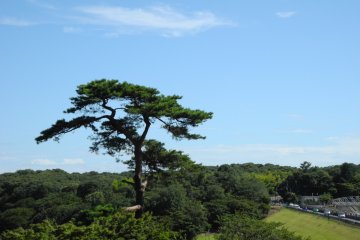