All You Need to Know About Ramen

Learn all about Japan's culinary gift to the world

Eating ramen (denoted as ラーメン or らーめん), also occasionally called “Shina soba” or “Chuuka soba” (both of which mean “Chinese soba noodles”), is something that should be on the bucket lists of almost all foreign tourists visiting Japan. Though its history is relatively short, ramen has grabbed the hearts of many a Japanese person, and has taken many foreign countries by storm in recent years as well. Delicious yet cheap without fail, ramen is not just a bowl of soup with noodles in it, now rivaling sushi as Japan’s national dish.

There are varying accounts on the origin of ramen, with some saying that the earliest instance of ramen in Japan occurred as long ago as 1665, when prominent daimyo Mito Mitsukuni (also known as Mito Komon) tasted a Chinese dish which featured noodles in a soup. However, it is generally believed that ramen was introduced to Japan from China when the country opened its borders during the Meiji Period, originating from the Chinese restaurants in Yokohama’s Chinatown.

“Ramen” comes from the Chinese word “lamian,” which literally means “pulled noodles.” Although the first official ramen restaurant, Rairaiken, opened in Asakusa in 1910, ramen did not become popular until after World War II, with cheap American flour being introduced to the Japanese market and soldiers stationed in China opening up ramen restaurants after returning, the dish being "Japanized" in the process. Ramen cemented its place as an important part of Japanese cuisine in 1958, when Momofuku Ando introduced instant noodles to the world, which was later named the greatest Japanese invention of the 20th century; today, the average Japanese person eats instant noodles 40 times a year. In recent decades, ramen has taken off even further in popularity, with a wide variety of types being invented and countless ramen restaurants (called ramen-ya) opening in Japan and worldwide.

Ramen noodles usually consist of three ingredients: wheat flour, salt, and an alkaline mineral water known as kansui. Surprisingly, these yellow noodles can be served in a wide variety of ways by adjusting the ratio of the ingredients, which result in different textures. Furthermore, the noodles are cut to complement the soup, ranging from wavy to straight, and from wire-like thinness to udon-like thickness. At many ramen stores, you have the option to customize your noodles according to your preference: hosomen (thin noodles), futomen (thick noodles), or futsuu (regular).

The soup is the backbone of ramen; most ramen take its name from its type of soup. Ramen chefs spend years perfecting their soup, combining various dashi, tare, and koumi-abura to ultimately find the perfect balance and complement the noodles and toppings.

Although it can be said that no two ramen are the same, they can largely be divided into four categories, based on their soup:

In general, shoyu and shio ramen are mild, while tonkotsu and miso have a richer taste. However, many ramen-ya offer the option to customize the soup to match your preferences, as either kotteri (rich), assari (mild), or futsuu (regular). You may also be able to adjust the amount of oil in the soup — abura-oome (more oil), abura-sukuname (less oil), or futsuu (regular).

No bowl of ramen is complete without toppings. A typical ramen bowl will usually include three or four default toppings; many ramen-ya will have options that include a lot of one topping on their menu (e.g. chaashuu-men, negi-ramen, etc.). You can also add extra toppings to any bowl of ramen for around 100 or 200 yen each, while some places will have a zenbu-nose (all toppings) option. Coming in a wide variety, some toppings will match certain broths more than others; for example, Sapporo's miso ramen is known for being topped with corn and butter, which are almost never included in ramen of any other broth.

Below is a list of the most common toppings.

While ramen has become very “Japanized” over the years, ramen-ya that specialize in Chinese soup-noodle dishes have sprung up all over Japan, with the variations below being the most common. Some of these forms have even been incorporated into the menus of “standard” ramen-ya.

In recent years, ramen has diversified beyond different soups, noodles, and toppings; the following are the most popular examples.

A number of dishes are not classified as ramen, but still show heavy influences and significant similarities. The following are the most common examples:

The standard bowl of ramen varies widely from region to region, with different combinations of soup, noodles, and toppings. Some of these "regional ramen," known as gotochi ramen, have become so popular that stores have opened in other cities; for example, you can find many places serving Hakata ramen in Tokyo. “Ramen theme parks,” where ramen restaurants from all over Japan gather in one area (such as Tokyo Ramen Street and the Shin-Yokohama Ramen Museum), are must-visits for ramen lovers.

The “Big 3” regional ramen are generally regarded to be Sapporo, Kitakata, and Hakata, while the “Big 4” includes Wakayama. Below is a list of the most widely-known regional variations of ramen and their special characteristics.

While they are offered at many Chinese restaurants and family restaurants, the best place to enjoy a bowl of ramen is at a legitimate ramen-ya (ramen restaurant), without a question. Ramen-ya can be found all over Japan; chances are you won’t have to walk too far to get to one, especially near train stations. Many are open until fairly late at night, as ramen is the consensus “drunk food” (colloquially called shime, or “closing”) of Japan; businessmen scrambling into ramen-ya right before closing time after having a few drinks is a common nighttime sight.

Some ramen-ya serve more than one flavor, but many will specialize in ramen of just one type of soup. Take note of the ramen-ya's speciality (soup, regional variation, etc.) before entering; most will have their menu available outside of the store. Popular ramen-ya will have a queue, so get ready to wait. Don't be discouraged, though; since ramen is a fast food, the customers will be going in and out at a quick pace, so the wait may not be as long as you'd think. Once inside, it shouldn't take much longer than 10 minutes to receive your bowl of ramen and start slurping away.

Upon entering the ramen-ya, you will notice that some will have a ticket machine right by the entrance. This is where you place your order; feed money into the machine and press the button of your desired ramen, as well as any toppings and side dishes (Note: Ticket machines at some ramen-ya may not accept 5,000 yen and 10,000 yen bills). Give the ticket(s) to the chef or one of the waiters, who may ask for your preferences regarding the noodles (thick or thin) and soup (rich or mild, amount of oil). At ramen-ya that do not have ticket machines, simply tell the chef or waiter your order. Almost all bowls of ramen will fall in between the 500~1,000 yen range (those with extra toppings will cost slightly more); its cheap price alone is enough to see why it has become so beloved in Japan.

Many ramen-ya only have counter seating, with about 10 to 20 total seats; larger ramen-ya may have tables. At each table or seat is a tray of condiments (such as garlic, pepper, and spicy miso), which you can later add to the soup to enjoy a change of flavor. Furthermore, water is self-served at most ramen-ya (although they may provide the first glass for you); use the water jug or dispenser (depending on the restaurant) if you need a refill.

The most popular “sidekick” to a bowl of ramen is gyoza (fried dumplings), often served in a plate of about 5 pieces. Gyoza sauce is almost always self-served at ramen restaurants. Usually people will combine soy sauce (shoyu), vinegar (osu), and chili oil (raayu); you will find these among the tray of condiments. Other popular side dishes include rice and fried rice (chaahan), which may be offered in half- and full-sized bowls. Adding rice to the soup (after finishing the noodles and toppings) and eating it is a popular thing to do as well. Some places will also offer donburi (rice bowls with different toppings), such as chaashuu-don and takana-don.

Generally speaking, ramen etiquette is not as strict as sushi etiquette, with most points of note being recommendations rather than explicit do's and don'ts.

Intern at JapanTravel & rising 4th year (senior) at the University of Virginia.  3/4 Japanese and 1/4 Australian; born and currently live in Yokohama.  My favorite spots in Japan (aside from Yokohama) are Hokkaido, Okinawa, and Tochigi, but hopefully someday I'll get to visit all 47 prefectures. 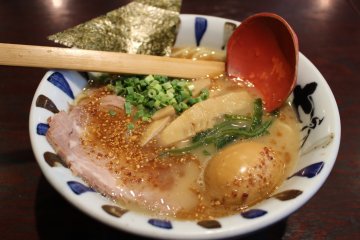 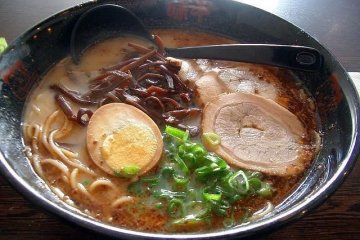 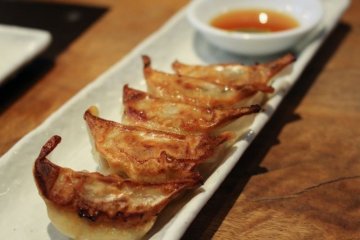 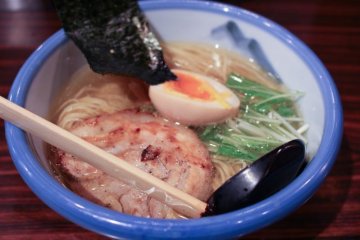 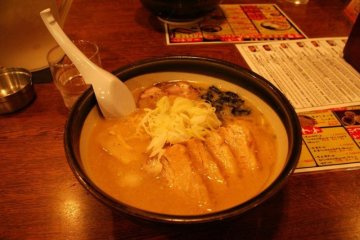 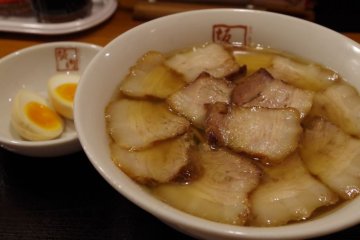 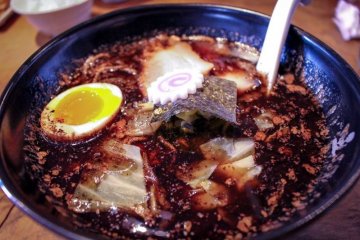 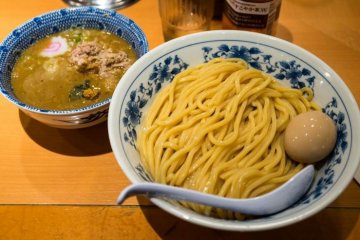 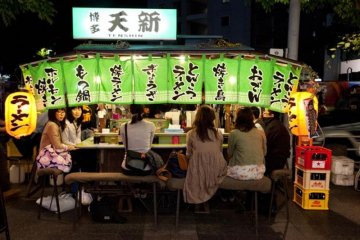 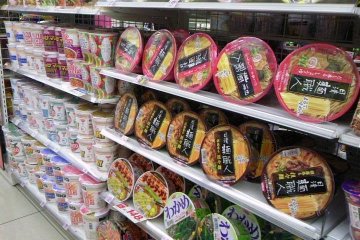