Compact and Convenient: The Rise of E-scooters in Japan

The ride of the future

When it comes to land transportation, Japan is noted for its punctuality, excellent service, and a large number of commuters. They have rental cars, bullet trains (shinkansen), and buses, to name a few. If it's only a short distance away from your work or school, and if you want to avoid the crowd during rush hours, the most preferable option would be a bicycle. However, in recent years, e-scooters have rightfully earned their spot among the favorite of Japanese commuters.

Dendo kikkubodo ( 電動キックボード ) is a Japanese phrase that literally translates to "electric kickboard''. It is one of the most popular electric vehicles among businesses and professionals in some parts of the world today, especially in urban areas. The e-scooter is considered a "micro-mobility device" vehicle that can travel at speeds of up to 20 km/h and can be ridden while standing. It falls under the unique category of kogata tokushu jidosha ( 小型特殊自動車 ) in Japanese traffic rules, or "specialized small vehicles".

This modern conveyance has recently swept the streets of Japan. Starting in Urawa-misono Station in Saitama, it has slowly expanded and now has two rental services that are just getting started in Tokyo and Fukuoka. Luup, a rental station in central Tokyo, is currently operating in central Tokyo, including Shibuya, Shinjuku, and Roppongi, and is planning to begin to offer e-scooter rental in two areas of Osaka, Minami and Kita, in the near future. In Fukuoka, a similar service named Mobby has just begun a testing period. Mobby began rolling out 100 e-scooters in Fukuoka's central Tenjin District on May 10, 2021. If the public response turns out to be positive, you can expect more of its production.

If you're planning on riding one, while a helmet is not necessary, it is highly encouraged for safety purposes. Contact your local officials to know where you can rent one and secure yourself a driver's license. Do these basic steps and you're good to go!

While e-scooters have their own disadvantages, like how it is not suited for long travels because unlike a bicycle it requires its passenger to stand, the benefits easily outweigh the negatives. E-scooters reduce carbon footprints, which not only helps the environment but lessens health problems as well. Knowing the limited space in Japan, parking lots can be a financial burden, but with this mode of transportation, it doesn't pose that much of a problem.

If you're wondering if it's better than a bicycle, it all depends on your personal preference and on what's more convenient to use depending on your location. 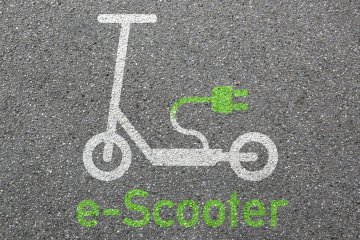 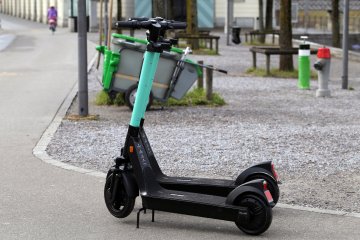