Experience the best view of Tokyo for the best value

Tokyo is a glittery concrete metropolis. It shimmers during the day and ignites into a sparkly, vibrant dreamland at night. Such an impressive terrain demands towering observation decks with record-breaking heights and 360 views to capture it all – it's a common request for any first time tourist wanting to ingest this sprawling landscape all at once. While there are plenty to choose from, however, The Mori Tower Tokyo City View still reins as the best possible view for the best value.

A little over 10 years old and only the 10th tallest building in Tokyo, it’s a chic showpiece positioned in the heart of this urban labyrinth and prides itself on its central location, whereas Skytree is far to the Northeast of town and Tokyo Tower hangs more to the Southeast. The Mori Tower offers unparalleled viewing access to the Tokyo metropolitan area, being in the middle of the Yamanote Line’s inner circle. It’s just a 2 minute walk from Roppongi Station on the Hibiya or Oedo Lines, being home to foreign embassies, fellow expats and nightclubs galore.

Plan to visit right before sunset to take in a little browsing at Roppongi Hills and admire the Keyakizaka Christmas Holiday Illumination, all located conveniently at the foot of the Tower, then head east to the City View entrance. A mere 1500 yen gets you up to the 52nd floor observation deck and entrance to the Mori Modern Art Museum. Expect only moderate crowds (They’re all at Skytree) and plenty of chairs and window perches for gazing. There are also comprehensive keys of the landscape at hand located at each of the four cardinal points of the deck, identifying essential landmarks of the city so guests know exactly where they are looking. On a clear day Tokyo Bay and Disney Resort are visible to the East, Shibuya and Shinjuku and beyond to the West, Haneda Airport and as far as Yokohama’s ports to the South and of course Mount Fuji to the Southwest.

Hungry or thirsty? There is a coffee shop that serves cakes, sandwiches and juice smoothies, as well as a lounge bar and restaurant serving Japanese-Italian fusion fare. The space is framed by floor to ceiling glass panel windows for the ultimate viewing experience. Enjoy a libation or two and watch Fujiyama’s crown in the distance while the city transforms and sparkles right before your eyes.

For 360 degree outdoor rooftop views, there’s also the open air Sky Deck on the 54th floor for an extra 500-yen, but note that it closes even if there is a slight breeze. The observation deck is open 365 days a year and admission ends 30 minutes before closing (60 minutes before on weekends and public holidays). It remains an easily accessible and affordable impromptu view of the city to add to a first time tourist’s list of “Tokyo to-do’s”.

Find out more about Roppongi Hills.

I pay songwriters by day and scour Yelp by night. Rest of my time is spent traveling. 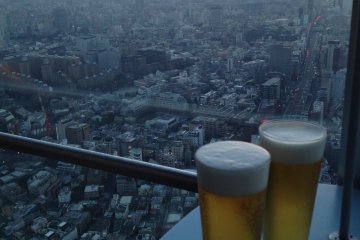 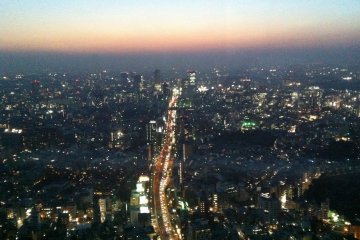 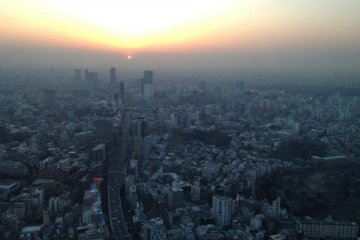