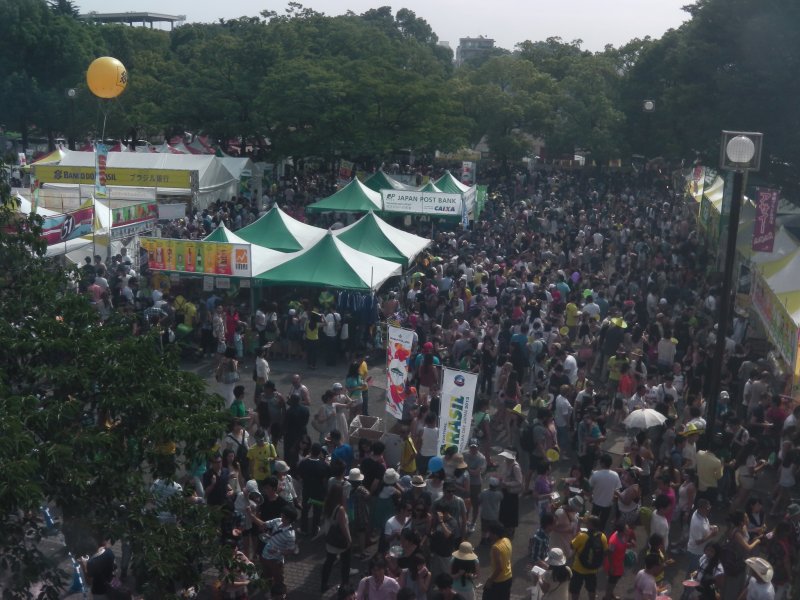 Brazil Festival: it's a big one! (Photo: Todd Wojnowski)

It has been reported this event is cancelled for the current year — please check the official site for more details.

Put on your yellow clothes, dust off your Portuguese phrase book and head to Tokyo’s Yoyogi Park: it’s time for the Brazil Festival!

This annual event is a huge happening, and is perhaps the most exciting event on the long list of international summer festivals held at Yoyogi Park. While some festivals are little more than lines of food and craft vendors, the Brazil Festival is always jumping with the festive spirit that country is so well-known for. Drum and music groups perform around the festival grounds, with crowds really getting into it. The music performers on stage rock out with an energy that gets the crowd dancing and hip shaking. And those who follow Brazilian pop culture closely will enjoy performances by some very big names they manage to bring in.

Capoeira performances are a big attraction. This Brazilian martial art is a combination of dance, music, and acrobatics, and crowds who gather round to watch some very impressive performances get caught up in the music and singing that goes along with it. Capoeira mainly focuses on non-contact martial arts, with performers slowing down their maneuvers to demonstrate their skill.

Of course, it wouldn’t be a true Yoyogi festival if it wasn’t for the delicious food. People lined up for churrasco (grilled meat), linguiça (garlicky smoked pork sausage), and a variety of (mostly alcoholic) drinks made with pineapple, coconut, açaí, and other fruits. Bottles of cachaça (Brazilian liquor made from fermented sugarcane juice) are on hand to make you a caipirinha, the national cocktail of this South American nation. There are also plenty of cans of Guaraná Antarctica, a popular guaraná-flavored soft drink in Brazil.

With over 300,000 living in Japan, Brazilians make up a big percentage of the foreign community here. The opposite is also true: Brazil is home to the biggest population of Japanese people outside of Japan. These migration patterns have created a healthy friendship and liking between the two countries, which is evident by the party atmosphere of this festival.

The Brazil festival is usually held in mid-July. Entrance is free. It is held in the event square near the permanent stage in Tokyo’s Yoyogi Park, near the NHK building.

Find out more about Yoyogi Park.