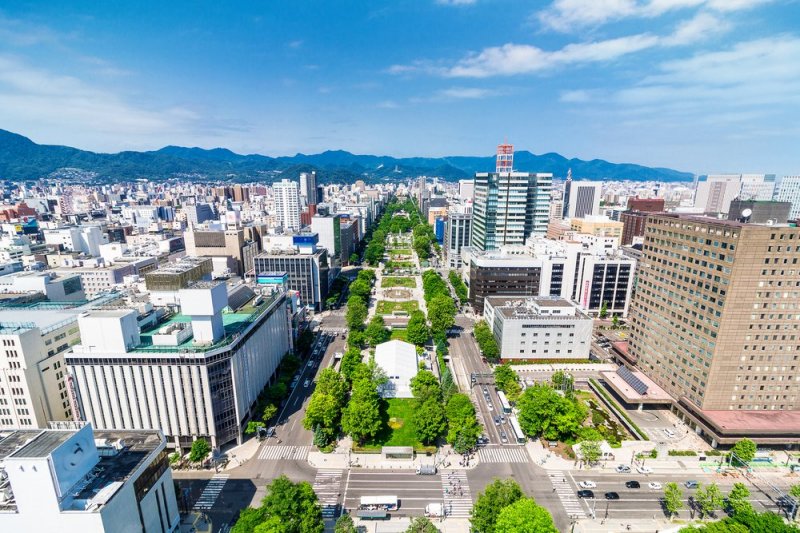 Odori Park (Odori Koen) is a 13-block open space that stretches 1.5 kilometers from east to west. It is just under 7.9 hectares and is located in the city of Sapporo, on the northern main island of Hokkaido.

In addition to many open-air theaters, monuments, and lavishly laid out flower gardens, the park also houses the landmark of the city of Sapporo, the 147-meter-high television tower, from whose viewing platform you can overlook the park and the city. Another special feature is a maypole, which symbolizes the city partnership between Sapporo and Munich.

The Odori Park is internationally known for the Sapporo Snow Festival, which takes place there every year in February, with its meter-high sculptures made of ice and snow. In addition, various festivals take place there almost all year round. For the Summer Olympics, Odori Park is to serve as the start and endpoint of the marathon.

From the south exit of Sapporo Station, keep walking south for a few blocks until you reach the park. Odori Station (via the Nanboku, Tozai and Toho lines) sits at the east end of the park, while Nishijuichome on the Tozai line is found at the 11th block.

Hokkai Bon Odori, worth every second of joy

From the snow festival in February to the beer gardens in July, Odori Park is a hub for events in Sapporo

Ōdōri Kōen 's location is in the middle of the city, split Sapporo into its north and south sides. It spans for one and a half kilometers along twelve city blocks.

The Sapporo Snow Festival is a festival held annually each winter up in Sapporo, Hokkaido, attracting visitors from all over Japan to see the ice and snow sculptures.

Snowy scenes and ice sculptures dominate the landscape each February at Japan's biggest snow festival in Sapporo, Hokkaido. Check out the festival, food and culture while enjoying a winter wonderland.

Chill out at Sapporo's annual Snow Festival in February. With gigantic ice sculptures, hot drinks, and local food, the snow sculptures attract tourists from all over.

Whether it's by intricate statues of ice or life-size recreations of landmarks in snow you can't fail to be impressed by the creations at the Sapporo Yuki Matsuri.

The Sapporo Lilac Festival has been an annual event since 1959, and a year later, lilacs were designated as the city's official tree.Their springtime blooms add a lovely pop of color to Odori Park.

The Sapporo White Illumination event started back in 1981 with a fairly modest 1048 lights. Over the years, the event has expanded to over 800,000 lights and is now held at multiple locations across the city.

Hokkai Bon Odori, worth every second of joy

The Sapporo TV Tower is a 147.2 m high radio tower that offers a view of the city and the surrounding mountains from a 360 ° viewing platform at a height of 90.38 m. It is located in the Japane...

The Stay Sapporo is a new hostel in Sapporo that has everything a budget traveler could need. Located near Susukino entertainment district.

Stay in Hotel Pearl City Sapporo, which is conveniently located in the downtown and within walkable distance to many of the Sapporo's main attractions.

Enishiya is an intimate and friendly guesthouse much alike those found in Europe. Conveniently located near Nakajimakoen Subway Station, it is a great choice for lone travelers in Sapporo.

Adanonki in Sapporo is a used book store that serves craft beer. It's a fine place to relax with a beer or explore the shops collections of reading material.

From mainstream to boutique, this is everything you need to know about Hokkaido beer.

Sapporo Maruyama Zoo is a municipal animal park in Sapporo, Hokkaido Prefecture. When it opened in 1951, this zoo was the 10 largest in all of Japan, and it is still one of the most popular zoos in the country, ranging from Surrounded by nature. In 2013, the zoo was home to 184 different types of animals. These include numerous mammals, birds, and reptiles. In addition, the zoo is committed to raising various breeds. The philosophy behind the Sapporo Maruyama Zoo is to provide the animals with a natural environment in which its residents can act according to their natural instincts. With the help of modern zoo facilities, the animals can easily share their experiences with the visitors. Last but not least, there is the zoo's forest. A forest area on the edge of the zoo with an area of ​​2 hectares where you can experience Sapporo from 50 years ago.

This premier stadium in Sapporo, Hokkaido offers visitors a full fan experience, from on-site restaurants to an observatory with a unique view of what's going on. The playing field itself uses a floating technology that rolls the lawn outside the stadium when no games are scheduled so that the green area can benefit from better growing conditions. The natural grass field weighs 8,300 tons, is 120 meters long and 85 meters wide. The stadium is home to the Consadole Sapporo professional soccer team and the Hokkaido Nippon Ham Fighters professional baseball team. Dome tours are offered on days without games or other events. The dome also features an observation tower, a park for children, and a weight training room.