The special white edition of the Nankai Rapit Limited Express with Peach Airways colors. Kintetsu Rail Pass holders can ride this train with one of the three limited express coupons. This train goes from Osaka to Kansai Airport via Sakai and Kishiwada (Photo: Bonson Lam)

Kansai Airport to Nara by Train/Bus

What is the fastest, cheapest and most convenient way?

The special white edition of the Nankai Rapit Limited Express with Peach Airways colors. Kintetsu Rail Pass holders can ride this train with one of the three limited express coupons. This train goes from Osaka to Kansai Airport via Sakai and Kishiwada (Photo: Bonson Lam)
Bonson Lam   Oct 24, 2015 - 5 min read

The distance between Osaka's Kansai International Airport (KIX) to Nara is between 77km (Nankai Railways) and 83km (JR). However, there are no direct trains. Why is that, I hear you say? KIX is a relatively new airport and is out of the way of the main trunk routes between Nara and Osaka or Kyoto. So, what is the cheapest, fastest, and most comfortable/ convenient way to get from Kansai Airport to Nara?

A dedicated airport bus operates between Kansai Airport and Nara with stops at Tenri, Nara Hotel, Kintetsu Nara before terminating at JR Nara Railway Station. The trip takes 90 minutes and the one way fare costs ¥2,050 for adults and ¥1,030 for children. The return fare is ¥3,900 which must be used within 14 days of the first trip. They accept cash and most credit cards, including American Express, JCB, Mastercard, Union Pay and Visa at the ticket office.

The first bus from Kansai Airport Terminal 1 departs at 0740 and arrives at Nara at 0910. Some daytime buses also pick up at Terminal 2 15 minutes earlier, with the first terminal 2 bus departing at 0725 before heading to Terminal 1. There are buses every hour at 40 past the hour until the last bus at 2140 which gets to Nara at 2310.

From Nara the first bus is at 0600 arriving at Kansai Airport at 0725, with hourly departures and the last bus departs at 2100 and arriving at 2225

Passengers with a lot of luggage who want a direct service or who are worried about getting lost during the transfer (e.g. if they forget to change trains or change for a train going in the opposite direction)

Those not wanting to activate the JR Pass for this trip, for example visitors staying in Nara for one or two days before activating the railway pass, or those arriving at Kansai Airport in the evening and so will not use the train beyond Nara once they check in at their accommodation.

While the limousine bus from KIX airport is direct the services are not that frequent, being hourly. For example, if you arrive at 0800 you can get 0940 bus which arrives at 1110. This is where the more frequent JR Haruka train comes into play. The 0916 train gets to Tennoji just 34 mins later, with a change to a local express, you will have an all up trip of 75 mins arriving at Nara at 1031. The trip costs ¥2800, however with a rail pass this can end up cheaper than the bus.

An alternative to the JR or JR West rail pass is the ICOCA and Haruka discount ticket package. ICOCA is a rechargeable card giving access to all JR and private trains, buses, and subway in the Kansai area. The package contains the ICOCA card loaded with ¥1,500, a ¥500 refundable deposit, and a one way Haruka ticket to Tennoji. Worth ¥4,230 if purchased separately, the package is just ¥3,030 yen. A Haruka return ticket + ICOCA package is even better value, at ¥4,060 yen for just under ¥6,460 of value provided you use the return Haruka ticket within 2 weeks of activating the package. The only problem is that the Haruka only runs hourly in the middle of the day.

Passengers who want to get to Nara as quickly as possible

Passengers who can navigate their own with a lot of luggage who want a direct service with the inconvenience of two or more changes on the train, or who are worried about getting lost during the transfer (e.g. if they forget to get off at right station)

The Nara Access Ticket is the cheapest but slowest option, but with the advantage of frequent services. It consists of two sections, the Nankai Airport line from Kansai Airport to Namba, and then the Kintetsu Nara line from Osaka Namba to Nara. There is a short walk between the Nankai Namba and Kintetsu’s Osaka Namba station, so you need to watch the signs to ensure you don’t get lost between the two.

This ticket at ¥1,230 is the cheapest but takes 122 minutes, using the slower express trains, though an upgrade to the faster and more comfortable limited express trains is possible.

If you wish to make day trips from Nara to Kyoto, Mie, Osaka and Aichi (Nagoya) Prefectures, a better option would be to purchase the Kintetsu Rail Pass, which is valid for five days and provides costs over ¥5,000 yen of value for ¥3,800

A mix and match option involving a combination of JR, Nankai and Kintetsu trains is also possible if you are not using a rail pass that restricts you to one company. This freestyle option allows you to catch the next available train at Kansai airport, as well as the next connecting train in central Osaka (Shin Imamiya or Namba if using Nankai, or Tennoji if using JR). 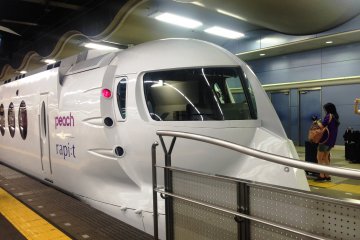 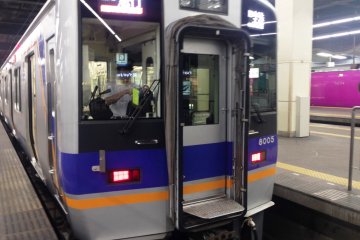 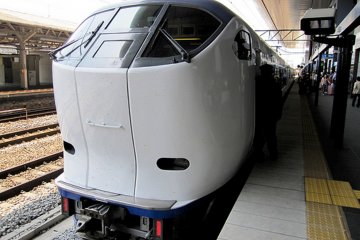