Traditional luxury in the heart of Kurashiki

Kurashiki is the perfect town for strolling. With its willow-lined canals, attractive white storehouses and cobbled lanes lined with unique shops, an afternoon here is one you won't soon forget.

But it can be hard to enjoy the lovely setting when the town is jammed with like-minded tourists. How can you escape the hordes? Spend the night in a canal-side ryokan (traditional inn) like I did at the Ryokan Tsurugata.

Ryokan Tsurugata sits at the edge of the canal in Kurashiki's Bikan district, within spitting distance of museums and gift shops and only a short walk from the Kurashiki train station. The ryokan building may look large, but the interior boasts only 13 rooms, making this a more intimate overnight experience than most lodgings. Nearly all rooms have views of the ryokan's inner garden and traffic along the cobbled lane outside is non-existent.

Reserve your room with meals included, since you won't want to miss out on the culinary feast that is dinner here. All of the seafood products come from the nearby Seto Inland Sea, so expect a heavy emphasis on fresh fish. I began my meal with a typical sashimi platter before being served an entire fish cooked in a soy/sake reduction. If that wasn't enough, the ryokan's signature hamo (conger pike) tempura rolls were well worth stuffing into my already full stomach. Fish isn't the only thing on the menu, though, so expect a few other plates, as well as the standard rice, soup and pickles. If you're lucky, you'll finish off with one of Okayama Prefecture's famous fruits, like grapes or peaches. While there is a dining room on the premises (and it's used for breakfast in the morning), dinner is a more private affair and you'll be catered to in your room.

Be aware that washing facilities are communal, though toilets are attached to every room. The ryokan's gender-segregated baths looked lovely, but the one disappointment of the property was the temperature of the women's bath. It was so unbearable, I couldn't even stick my toe into it for any length of time.

Perhaps the best thing about Ryokan Tsurugata is the ability to stumble out the door in the late evening (good for walking off dinner!) or early morning to see the canal district at its best ... with no one else around. 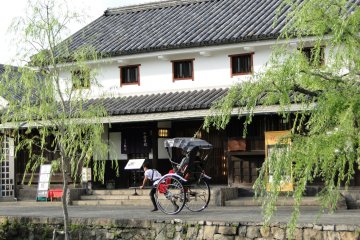 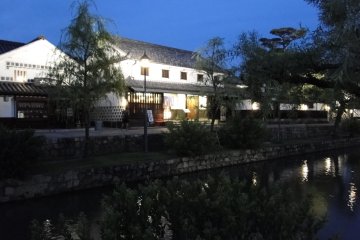 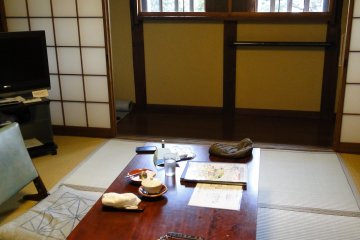 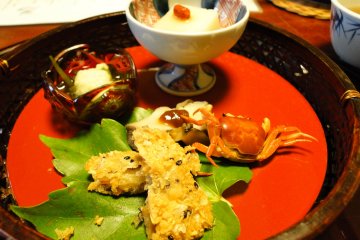 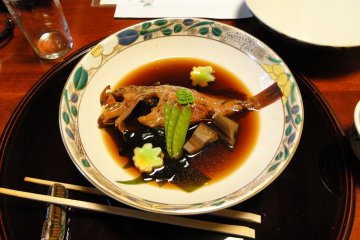