Ancient Traditions of the Gion Matsuri

I first went to the festival almost ten years ago. I didn’t know anything about what it meant, and only had few hours in Kyoto before heading back to Osaka for work at 2pm. I was told that the highlight was the way the fixed wheel two storey high floats turn corners in the downtown office area, and how they manage to turn an obstinate elephant-sized behemoth ninety degrees without tipping it over. It was a type of perverse voyeurism that only ambulance and storm chasers could enjoy.

But at the same time, these ancient festival floats parading against the backdrop of concrete offices somehow look strangely out of place away from the machiya lined walkways that Kyoto is known for, silent except for the occasional clack of a Geisha’s wooden geta. For me, coming from the new world and idealizing the old, it is hard to reconcile this collusion between the modern and the traditional, and wanting a more fairy tale-like experience, it was tempting to just head to one of the little Kyotos of Japan, like Takayama during the autumn festival. It is almost like a father who idolized the youth of his daughter, but somehow she has grown up to become someone else, with or without his approval.

The Gion Festival didn’t always display its wares on the main street. The head of the festival committee Mr Yoshida tells me that during his youth last century the procession would take place in the narrow machiya lined back lanes, and along with the lanterns and flutes would create a magical atmosphere. These days, these floats would end their parade in Shimachi Street, and if you can get away from the action on the street corners, you can catch a glimpse of what it was like in the past. With names like “Chrysanthemum Water”, experiencing this festival is like breathing deep in an open air gallery of art and history.

While you are in the neighbourhoods that give birth and sustain the festival, take a look at the elaborate tapestries and displays in many of the traditional townhouses, or machiyas. A big part of Gion Matsuri is the screen festival, or Byobu Matsuri. Many of these folding screens have been passed down for centuries, brought over by caravans over the Silk Route from Samarkand and Rome, depicting heroic pictures like gold gilded lions.

There are just over thirty Yamahokocho neighbourhoods that are responsible for the display of the screens as well as the floats. Mr Yoshida was the co-ordinator of one of these neighbourhood guilds. After dedicating himself to the festival for half a century, he rose through the ranks to be the chairman of the festival committee and is now its living custodian.

Today he oversees a month long spectacle that draws crowds of up to half a million people, including many first timers who would think nothing but wait six or seven deep in those street corners waiting to see the first float to tip over, and cheering when it invariably doesn’t. I am sure some of these first timers would love it so much that they will stay, learn Japanese, and volunteer to pull the floats.

The Gion Matsuri is held in various locations in Kyoto City. Take a subway or Hankyu train to the nearest train station. Remember to bring water, and a hat if you are out in the summer heat in the middle of the day.

Find out more about Yasaka Shrine. 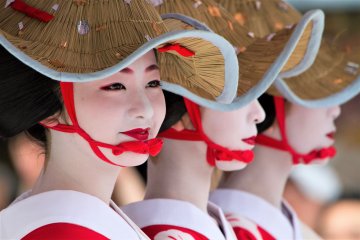 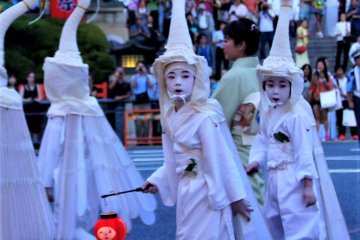 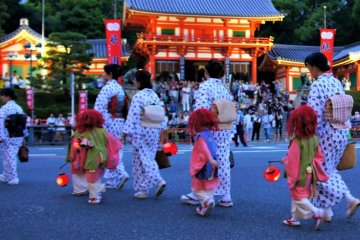