An blend of modern then and historical now

Courtesy of its historical role as a transport hub, Shinagawa City Ward is an eclectic blend of history, heritage and modern life. Plenty of waterfront views give the city an open ambience with many opportunities for sightseeing. Here is an introduction to some of the many landmarks and historical spots in Shinagawa and how to reach them.

Restored in 2015, the Hamakawa Gun Battery sits as a reminder of the trauma and tribulations surrounding Japan's forced opening to the world in the mid-19th century. Supplied by what is now Kochi Prefecture, the gun battery was built as a deterrent against potential attacks by US Commodore Perry's Black Ships.

A 3-minute walk from Tachiagawa Station on the Keikyu Main Line.

A lovely pedestrian connection between Tennozu Isle and the rest of the city, Isle Bridge and its wide walkway offers great opportunities to stroll the area and take in the waterfront landscape. The open nature of its bowstring-style design is enhanced by its central circular viewing deck with views of the local parks and cherry blossoms a feature.

Shinagawa Shotengai is Tokyo's largest traditional shotengai shopping street. It features the 800m-long Musashi Koyama and the whopping 1.3km-stretch known as Togoshi Ginza. With a combined total of well over 700 stores, the area is a proper treasure trove of traditional shopping and culture, making it a proper adventure of strolling, snacking and shopping.

A 4-minute walk from Togoshi-Ginza Station on the Tokyu Ikegami Line.

Heading towards Kyoto, Shinagawa-juku was the first post town for travellers leaving old Edo. Walking the Tokaido Trail today leads visitors to some fascinating monuments to the area's local history including numerous old Showa-era buildings, an Edo period bridge nicknamed the Bridge of Tears as well as many temples and shrines.

A 2-miute walk from Kita-Shinagawa Station on the Keikyu Main Line. 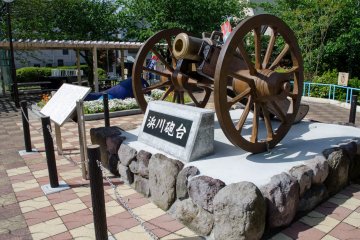