Almost hidden away between the Tama and Nogawa rivers can be found little Komae City. The city, though firmly residential, does manage to surprise with some decidedly historic points of interest like a rare two-storied bell tower and trees older than old. Here is an introduction to some of the temples and shrines of Komae and how to reach them.

Home to a 350-year old linden tree designated as a Natural Property of the city, Gyokusen-ji Temple was originally established in the early 16th century and is one of the oldest buildings in the area. Beautifully laid out with a sanmon entrance gate, the temple grounds are small exude a definite sense of serenity.

A 2-minute walk from Izumi-Tamagawa Station on the Odakyu Odawara Line.

Seated right by Myojin Temple is Iwado Hachimangu Shrine. The shrine's two komainu guardian statues are weathered and worn with the distinctive feature of both having cubs. The surrounding grounds also feature that well-used image and as expected, comes alive during the neighbourhood's local festivals.

A 15-minute walk from Komae Station on the Odakyu Odawara Line.

Set well back from its multiple torii gates lies Izumi Shrine. Home to plenty of space- which is made good use of during the New Year period - the shrine features two elaborately sculpted stone komainu guardian statues as well as a lovely kaguraden ceremonial platform where musicians perform during ceremonies.

A 15-minute walk from Komae Station on the Odakyu Odawara Line.

With an impressive sanmon entrance gate and a rare and elaborate two-storied bell tower, Senryu-ji Temple is an 8th century temple complex whose buildings now date from the Edo period. The temple is also right by the Komae Benzaiten Greenery with its two hundred square metre pond and wooded parkland.

A 2-minute walk from Komae Station on the Odakyu Odawara Line. 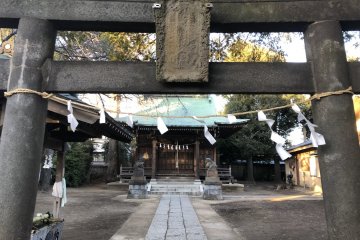