Tiny it may be but Hamura City pulls its weight when it comes to history and heritage. A surprising number of the city's temples and shrines feature culturally recognised properties that, when combined with the area's natural ambience, make them a pleasure to visit. Here is an introduction to some of the temples and shrines of Hamura and how to reach them.

Culturally recognised by the Tokyo government, Aso Shrine sits along the banks of the Tama River and is home to a chinquapin tree said to be a thousand years old. First established in the seventh century, this rural shrine clearly comes with a touch of the past, its structures and grounds blending in perfectly with the nature around it.

A 20-minute walk from either Hamura or Ozaku stations on the JR Ome Line.

The main claim to fame for Ippo-in Temple is its handsome bell tower. Constructed in the early 19th century, the design is a unique one combining the bell tower with the temple's entrance gate. This culturally recognised structure sits alongside a story that says the temple was built by a descendant of the infamous 10th century warrior, Taira no Masakado.

A 19-minute walk from Hamura Station on the JR Ome Line.

Full of history and culture, Tamagawa Shrine was the location of the original 20th century school for the city. While right beside the main shrine building can be seen an old onbashira pillar, enshrined and given special status due to its being sourced from a famous festival that occurs once every six years at Suwa Taisha Shrine in Nagano Prefecture.

Zenpuku Temple is headlined by a thatched-roof sanmon entrance gate that can only be described as a miracle. A registered cultural property of the city, the gate was built sometime in the 15th century and is said to have the survived the floods, fires and earthquakes that took down the rest of the original temple structures. 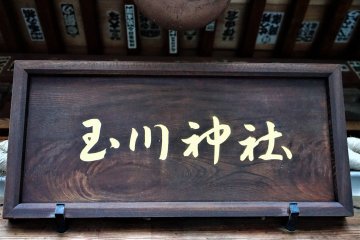