Ever heard of Gundam? The Gundam franchise began on April 7, 1979, with Mobile Suit Gundam, a TV series that defined the "real robot" mecha anime genre by depicting giant robots called mobile suits (including the original titular mecha) in a militaristic setting. Back then, it was such a huge hit that kids and adults alike would line up for the highly coveted model kits, and the series made way to a lot of collectors that are still present even to this day.

It was only in 2020 that the Yokohama Gundam Factory opened and the coastal scenery of the Yamashita Pier was gifted with a mechanical marvel that aimed to signifying a new technological era, albeit imagined.

Yokohama's suit had a fascinating backstory to it. According to the Gundam narrative, after surviving the conflict between Earthlings and spacenoids, the Gundam was said to be lost. That is, until a large number of parts that appeared to be from Gundam-style mobile suits were unearthed near Yokohama's Yamashita Pier. To explicate these parts, engineers from many professions have gathered at Gundam Factory Yokohama for investigation, analysis, and rebuilding.

Finally, after much experimentation, a new Gundam was born.

Gundam fans should brace themselves for a new attraction because a fresh new Gundam robot is set to be put at the new Mitsui Shopping Park Lalaport in Fukuoka by spring 2022.

In Fukuoka's Hakata Ward, a new shopping and entertainment complex is set to open numerous stores, restaurants, and an outdoor plaza with a life-size Gundam robot statue. The installation will be a 1:1 scale recreation of the RX-93 v Gundam, often known as Nu Gundam, the hero mecha from the franchise's first film, 'Mobile Suit Gundam: Char's Counterattack,' which was released in 1988. (If you’re a fan, it’s probably time to have a rerun on your collection of Gundam movies; if you’re not, this is your sign.)

Not only that, but it's Western Japan's first Gundam statue. A Fin Funnel—a special beam weapon specific to Nu Gundams—stands behind the mecha.

In addition to the new statue, the Mitsui Shopping Park Lalaport Fukuoka will feature a Gundam Park specialty shop and a museum when it opens in April 2022, so expect a lot to do there that involves sightseeing and hoarding of collective items.

Life is far too short to hold yourself back from indulging in things that bring you joy. If a giant mecha can brighten your day why not swing by? 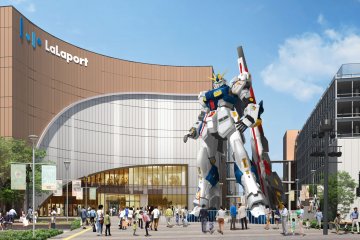