A "castle" with fantastic views of the Seto Inland Sea

The northernmost part of Ehime is a peninsular jutting into the Seto Inland Sea. On the other side of the Inland Sea is Hiroshima Prefecture. A chain of islands stretches across the sea, nearly blocking the east-west passage of ships. The highest point on this peninsular is a mountain called Umiyama or Sea Mountain. It’s a strategic spot, offering a commanding view of the whole area, and not surprisingly, it has a castle on top of it. According to a sign posted in the castle, the mountain used to be called Omiyama, which means See a Long Way Mountain, and that was certainly a fitting name too.

The main road between Imabari and Matsuyama passes a good way south of Umiyama, which is hidden from view by another range of hills. The railway however takes a more northerly route around the edge of the peninsular, offering a tantalizing view of a mysterious castle-y building atop the steep-sided hill.

In point of fact, the castle isn’t ‘real’. It’s an entirely recent building made of non-traditional concrete and traditional tiles. There have been guardhouses on Umiyama since the 8th century, and the successive structures will have been completely different anyway. As it is, the current building serves its function as a viewing platform very well, plus it blends in well with its surroundings.

There are two routes up to Umiyama, one for cars, the other for people on foot. The route for cars winds up through a beautiful bamboo forest. The road stops just below the summit of the hill at a car park with toilets. Drivers will be typically be approaching from the south, and the road upwards starts at the northeast of the hill. The footpath starts at the southwest and climbs steeply with many steps.

The observation ‘castle’ itself is pleasantly cool inside. The ground floor is decorated with sun-faded photographs of Imabari. When I visited in spring, a middle-aged couple were enjoying an evening picnic dinner on the second floor which has several benches. The views in all directions are fantastic. To the northeast, you can see the undulating lines of the Shimanami Kaido expressway. The nearest suspension bridge crosses the Kurushima Strait. The north is the northernmost point of Ehime prefecture. To the east, you can see the city of Imabari. 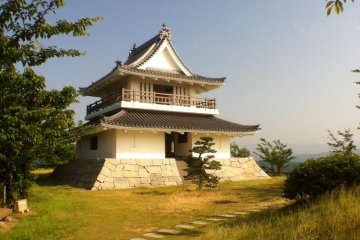 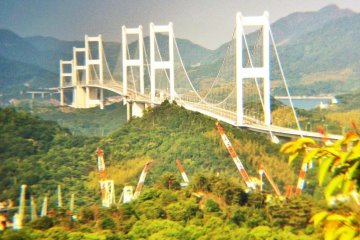 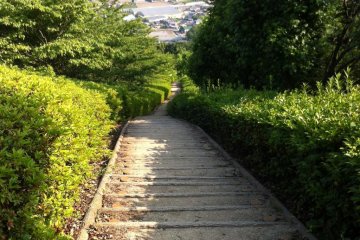 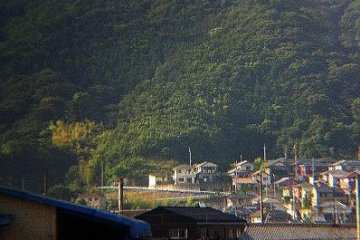