Guide to the Woody Plants of the Kanto Area

If you like hiking and are here in Japan for a short visit (which most likely means you don't speak Japanese), you might find it difficult to know the names of the trees and plants that you encounter in your hike, let alone know what they're useful for. Sometimes, even if you can speak enough Japanese to be able to ask, chances are people would not be able to identify them either. Forget about trying to learn the scientific names!

Thankfully, there's a free resource you could easily download and bring with you on your hike: 65 Woody Plants Common to the Kanto Area. This is the hard work of Julie Fukuda, a Scout who has received the prestigious Silver Beaver and Silver Antelope Awards. This book was a year long project in partial fulfillment of the requirements for the PhD in the College of Commissioner Science of the Boys Scouts of America. At the time it was made, there was little information in English about Japanese plants. It was originally drafted on a word processor and the illustrations were hand drawn. The pages could be printed out in A4 paper, folded in half and stapled into a book along the open edges.

If you know the Latin names of plants, you can connect up plants in Japan with those in other countries. For example, the Rhus family in the United States has three plants that are poisonous: poison ivy, poison oak, and poison sumac. When you are hiking in the US, you have to be able to identify those three poisonous plants. When you come to Japan, they’re not here. Instead, we have three different poisonous plants: lacquer vine, poison lacquer and mountain lacquer. Those three plants are from the same Rhus family. If you touch them and get the sap on you, they’re poisonous in the same way.

You can thank Julie for her guide on her Scouting blog, A Whittle Scouting. 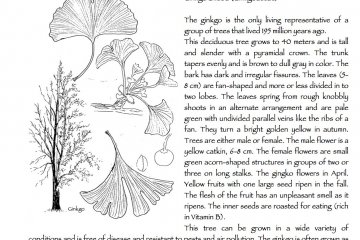 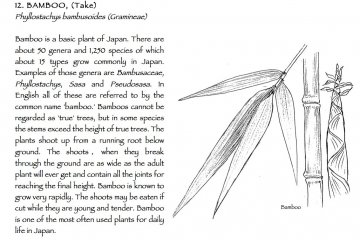