Yunomine is a remote onsen village in the Kumano area popular with pilgrims and hikers on the Kumano Kodo. (Photo: Alena Eckelmann)

The Healing Powers of Yunomine Onsen

Yunomine is a small hot spring village near Hongu Town in the south of Wakayama Prefecture. The story of the onsen’s discovery about 1,800 years ago strongly relates to its reputation of being a place for healing.

As legend has it, hot spring waters were streaming out of a stone statue of Yakushi Nyorai, the Buddha of Healing and Medicine, that was found here. This Buddhist image of Yakushi is now venerated at Toko-ji Temple in Yunomine.

There is indeed a hole in the statue at chest level and it is said that the water came gushing out from there. True or not, this story gave the onsen its name. Yunomune, literally “hole in the chest”, changed over the years into Yunomine and the place became known as a place for healing.

Apart from famous Tsubo-yu, a small log cabin set atop Yunotani River, there are many other places where you can enjoy a hot spring bath. Many minshuku and ryokan located along the Yunotani River have actually their own onsen baths and their guests can use them for free.

There is not much to do in Yunomine in the evenings except for taking a relaxing stroll along the river before enjoying dinner at the minshuku or ryokan. If you fancy an appetizer though, then why not try onsen eggs.

There is an open hot spring well next to the river where boiling-hot onsen waters will cook your eggs and vegetables while you wait. You can get the raw eggs and vegetables at a small local store just across the road. They are put into nets and hung into the over 90 degrees hot water from a frame around the well that protects curious visitors from getting too close to the hot matter.

The Dainichi-goe and the Akagi-goe are two sections of the Kumano Kodo pilgrimage routes which have their trailheads here in Yunomine.

The Dainichi-goe is a short trail of only 3.4km that links the Kumano Hongu Taisha, one of the Kumano Three Grand Shrines, with Yunomine. While it is short, it is not for the unfit as it involves a steep climb over a mountain pass.

The 5.9km long Akagi-goe trail leads from Yunomine to Funatama-jinja and then in a loop of 8.2km back to the Kumano Hongu Taisha.

Both sections of the Kumano Kodo combined make for a nice roundtrip walk from and to the Hongu Taisha that can be done in a day. However, you would miss out on a relaxing overnight stay in picturesque Yunomine that involves a soothing soak in magical onsen waters with the potential to cure your every illness - if you believe in legends that is. 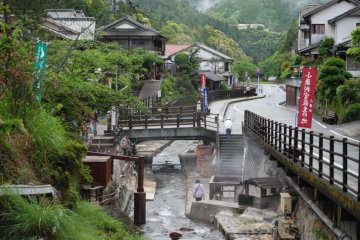 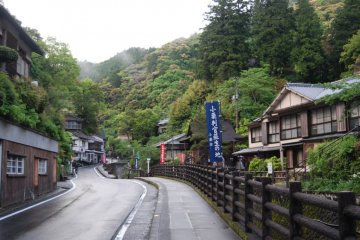 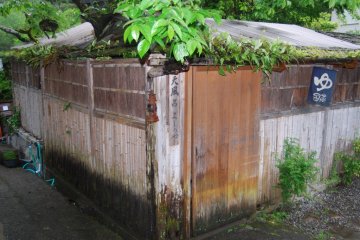 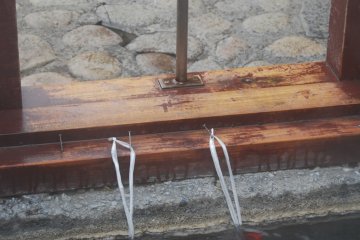