Anyone know where I can buy a violin?! (Photo: Todd Wojnowski)

Tokyo, if nothing else, is an extremely organized city. Its sprawling train system makes sense. People calmly wait in lines. There is a correct time, place and method for doing nearly everything, and the correct place to go shopping for musical instruments is Ochanomizu.

"Guitar Street," as it is sometimes called, is a lively hub of music stores and enthusiasts. The sounds of Aerosmith, Ozzy Osbourne and the Red Hot Chili Peppers pour out onto the street as pierced and pink-haired rockers mix among the junior high school students picking out their first instruments with their parents. The night lights shine off the finishes of the hundreds and thousands of guitars lining the walls of the stores. There is a lot of know-how and a lot of expertise here among the customers and shop clerks who engage in lively discussions and demonstrations of each instrument, accessory and tool.

It's not all about rock and roll, either. Next door, a sales clerk wearing a suit and white gloves expertly draws a bow across the strings of a violin that costs four months' salary. Across the street children press their noses against the showcases filled with shiny brass saxophones, French horns and trumpets. A woman is polishing the clarinets. Down a little, a group of men wearing Rastafarian hats are laughing and thumping on a collection of bongo and conga drums on a sidewalk display.

Tokyo is sometimes accused of being too fast, too cold, too impersonal. It can be, but not here.

The district consumes the street of Meidai Dori, named for Meiji University (Meiji Daigaku), which sits among the bustling stores. Explore the side streets and back alleys, too: there are shops around every corner here. This purpose of this article isn't to recommend one seller over another, as deciding on a musical instrument can be as personal a choice as selecting a cologne or perfume, products which become a part of you and represent you. Color, price, sound, shape, brand, style, design: an educated shopper will explore this area for all it has.

Some shops sell used instruments. You will also find some jazz bars and music clubs mixed in. There's a store selling high-end stereo systems for music lovers who would rather sit back and listen than be in the spotlight themselves. There's something for everyone here. 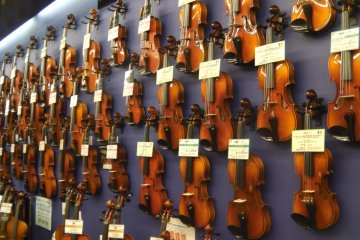 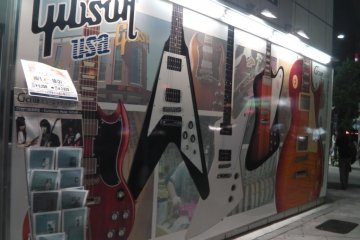 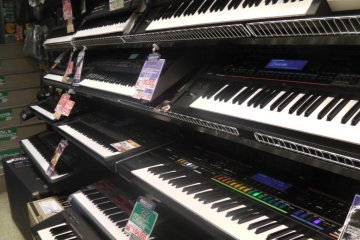 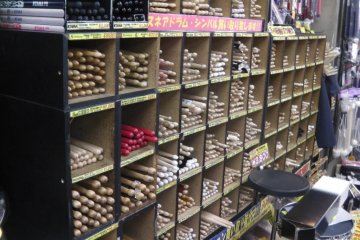 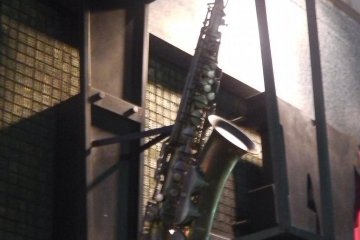 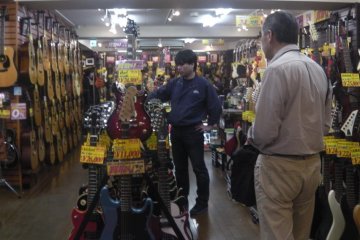 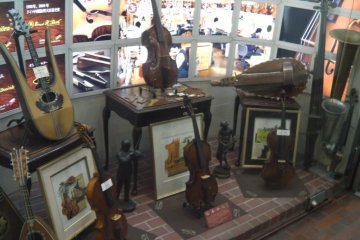 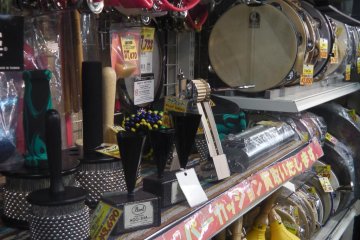 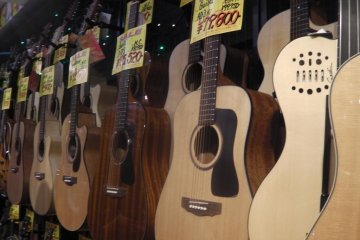 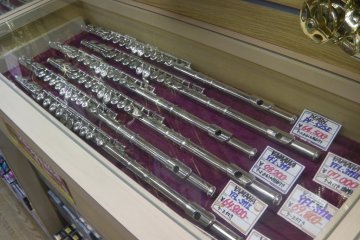 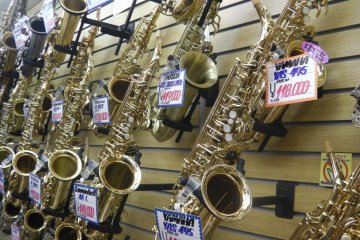 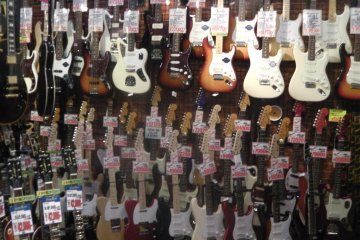