Tochigi: Top 10 Things to Do

Tochigi Prefecture is situated just north of Tokyo. Despite its close proximity to the technologically advanced city, Tochigi is filled with quaint charm and culture, making visitors feel like they are stepping into old Japan.

The area's immaculately preserved shrines and temples transport visitors to the rural past. In particular, Nikko City’s shrines and temples are designated as a UNESCO World Heritage Site. The natural beauty surrounding the prefecture is equally as stunning as its structures. Travelers can observe waterfalls, lakes, mountains, and volcanoes, the latter fueling the area's pristine hot spring destinations. Also, one cannot forget to try Tochigi's renowned local cuisine—delicious gyoza dumplings!

Ashikaga Flower Park is a true celebration of wisteria, called fuji in Japanese. Visitors can walk through a tunnel of the delicate hanging flowers and observe a massive wisteria tree that is over 100 years old. The ancient tree's branches are supported by beams that help create its imposing form of purple. The park's wisteria is in full bloom from mid-April to mid-May. Apart from its wisteria, Ashikaga Flower Park is home to a plethora of flower breeds such as Christmas roses, tulips, crocuses, hydrangeas, water lilies, and much more, ensuring visitors have an enchanting experience no matter the season. In winter, when most flowers are out of season, the park still dazzles visitors with its illuminated displays, most notably its hanging wisteria-shaped LED lights, which create an other-worldly scene. With Ashikaga Flower Park's breadth of offerings year-round, it is a unique destination that must be seen to be believed.

Japan’s Edo period was from 1603 to 1868 and although that era has long since passed, Edo Wonderland Nikko Edomura revives that history with its immersive activities and atmosphere. The educational theme park is constructed to look like an Edo-period village. As guests walk through the park, they are greeted by individuals dressed in period-appropriate clothing and have the option of dressing in period clothing themselves. Visitors can choose to spend their time in the park as ninjas, samurai, or princesses. Once donning their new attire, guests can fully envelop themselves in the environment by exploring the park's restaurants, shops, and museums. Learn about sword making at the Kanuchi Swordsmith Exhibit or face your fear of ghosts at the haunted Jigoku Temple. One cannot forget to watch the park's many live shows, some of which include displays of ninja action and traditional Edo-period performances. Throughout the day, visitors can refuel with the Edo-period cuisine of soba noodles and grilled meats. Edo Wonderland Nikko Edomura is an insightful and entertaining experience for all ages.

Lake Chuzenji in Nikko rests at the base of Mt. Nantai, a volcano whose eruption created the lake thousands of years ago. The scenic area is a popular hiking spot where visitors can explore the lake's perimeter. The area's magnificence is on full display in autumn when the lake's blue water is juxtaposed against the surrounding forest's warm tones. On Lake Chuzenji's shores stands a small hot spring town named Chuzenji Onsen. Here, travelers can enjoy the naturally created pools as well as take boat tours of the lake that depart from the town. Equally as famous as Lake Chuzenji is Kegon Falls, which flows directly from the lake. The 100-meter waterfall is ranked as one of Japan's three most beautiful waterfalls. Visitors can enjoy the falls in every season, whether it is accompanied by summer leaves, decorated in autumn colors, or frozen over in winter's chill. Guests have opportunities to experience the waterfall up close by taking an elevator to the foot of the falls or from afar from an observation deck.

Nasu Animal Kingdom is a unique park that encourages guests to interact with animals through observation, live shows, petting, and feeding. The park is home to 600 animals from around the world and is split into two main areas: Kingdom Town and Kingdom Farm. Kingdom Farm is an outdoor expanse filled with beautiful greenery, and of course, animals! Visitors can pose with alpacas, feed kangaroos, and much more. The indoor area, Kingdom Town, is home to capybaras, which are one of the most popular animals in the park. These good-natured mammals love back scratches and snacks from visitors. While in Kingdom Town, visitors can also explore restaurants, shops, and most notably spend time in the park's onsen. This one of a kind onsen has guests relaxing alongside the capybaras, whose nearby pool is separated by a glass wall. For dog-lovers, the park's dog zone is a must-see. Here, visitors can hang out with friendly canines and even rent one as a companion for the day. Apart from its exhibits, the park also has thrilling live shows. Most famous is the park's bird show. This display features eagles, hawks, and owls that soar above the guests’ heads. The unique atmosphere at Nasu Animal Kingdom completely revolutionizes the zoo experience for guests and, due to the indoor and outdoor features, is an enjoyable destination rain or shine!

Toshogu Shrine, located in Nikko, is the spiritual resting place of Tokugawa Ieyasu, the founder and first Shogun of the Tokugawa Shogunate, which was Japan's government during the Edo period. The world-renowned shrine exudes ancient spirituality with its collection of ornately designed structures and the surrounding woods. When visitors first approach the main entrance, they are greeted by a stunning five-story pagoda. The towering building stands vibrant against the forest with its red exterior. Just beyond the entrance are a group of storehouses, one of which contains the famous monkey sculptures of "hear no evil, speak no evil, see no evil." As visitors continue walking, they will arrive at Yomeimon, a gate that epitomizes the shrine's intricacy and beauty. The one-of-a-kind gate is mesmerizing with its hundreds of detailed carvings, elaborate coloring, and golden accents. Powerful dragon carvings guard the facade, reminding passersby of the sacredness of the site. Past Yomeimon and further into the shrine, visitors can trek up a staircase through the forest to Tokugawa Ieyasu's tomb. The relatively simplistic tomb conveys a humble message when contrasted against its opulent surroundings. Toshogu Shrine is truly an architectural and artistic feat with grandeur that is seldom seen in the modern world.

The site of Oya History Museum in Utsunonomiya City was originally a mine for oya stone until its closing 1986. Oya stone was formed by volcanic lava and ash and historically used as a building material in Japan. The museum’s entrance, which is above the mine’s entrance, houses information regarding the history of the mine and oya stone. After perusing the information, visitors can descend into the main attraction. The expansive mine is over 20,000 square meters and contains immense stone rooms that are illuminated by colorful lights. The rainbow of colors creates a fun ambience in the otherwise dark and monochrome environment. Visitors can easily forget they are underground due to the vastness of the mine as they enjoy modern art displays throughout the empty space. The visually intriguing area has been the site of concerts, TV filming, and even weddings! The Oya History Museum is a unique underground experience and, with its naturally cool temperatures, is a popular destination during the summer.

Ryuokyo Gorge is located in Nikko National Park and situated between Kinugawa Onsen and Kawaji Onsen. The scenic gorge is a perfect getaway for nature-lovers. The river is lined with rocky walls blanketed in trees, creating a twisted shape that many people allude to that of a writhing dragon. In autumn, the forest’s red and orange tones transform the hypothetical dragon into a fire-breathing one. A popular hike in the area starts at Ryuokyo Station and conveniently ends at Kawaji Onsen, which is an ideal place to rest after a hike. On the trail, visitors can enjoy the picturesque scenery with the soft sound of water lapping against the rocks.

Ryuzu Falls, located in Nikko, is praised as one of the best waterfalls in the area. With a name that translates to dragon head, the falls are an enchanting visual. The unique waterfall cascades down a cliffside in a single stream before splitting into two at its base. This fork is caused by a massive rock that resembles the head of a dragon resting in the water. The scenic falls are lined by dense foliage, making it a popular destination in late September through early October when the area is decorated in autumn colors. The ever-present sound of running water creates an atmosphere of calmness, making it easy for visitors to relate to the resting dragon. Visitors have the opportunity to enjoy the waterfall from a free observation deck at a nearby rest house. While in the area, travelers can also explore the surrounding scenery, including the Yukawa River, which is the source of Ryuzu Falls.

Envision waking to soft sunlight on your cheeks. Greenery blossoms outside your window. You sit up in a traditional futon bed and slide your feet into some slippers before walking across the tatami floors. You reach for a yukata, which is folded neatly by your bedside, and slip into the traditional attire. After brewing a cup of tea, you sit by floor to ceiling windows and bask in the morning’s glow wondering what the day has planned for you. This peaceful experience is a reality in Kinugawa Onsen.

Kinugawa Onsen is a hot spring resort town situated along the Kinugawa River. The area is filled with an abundance of destinations and activities, from nature excursions to theme parks to hot springs. For an authentic Japanese experience, visitors can stay at Kinugawa Onsen Hotel. The ryokan is known for its pristine hot springs, but also offers more modern activities such as karaoke and arcade games. Guests can treat themselves to the hotel’s exquisite food, which includes traditional Japanese and western dishes.

While in Kinugawa Onsen, visitors can also explore the area’s theme parks: Edo Wonderland Nikko Edomura and Tobu World Square. Tobu World Square is a theme park that houses dozens of detailed replicas of famous buildings and monuments from around the globe. The models, which are exactly 1/25th the original structures’ sizes, are meticulously cared for with foliage that even changes with the seasons. Visitors also have opportunities to enjoy the nearby waterfalls, rivers, and forests. Whether guests are looking to relax, explore destinations, or both, Kinugawa Onsen has activities for everyone.

Rinnoji is an eighth-century temple in Nikko founded by Shodo Shonin, a Buddhist monk credited for introducing Buddhism to the area. The sacredness of the temple is palpable and leaves visitors in awe of its ancient yet powerful beauty. Rinnoji’s main building, Sanbutsu-do, is a visual marvel with a red exterior, blue-and-green detailing, and traditional design. Inside Sanbutsu-do are three Buddha statues: Amida, Senju-Kannon, and Bato-Kannon, which represent Mt. Nyoho, Mt. Nantai, and Mt. Taro respectively, Nikko’s three holy mountains. These gold-lacquered statues stand eight meters tall and are expertly crafted with poised and serene expressions, reminding visitors of the area’s deep respect for the mountains. Near Sanbutsu-do is Homotsu-den, or the treasure house, which displays Buddhist and cultural exhibits. Visitors can observe numerous pieces of art, such as paintings, sculptures, and scrolls. Behind Homotsu-den, is a stunning Shoyo-en, which is a Japanese style garden. The overhanging trees, soft green tones, and still pond create a mesmerizing scene of tranquility. On windless days, the water’s stillness provides a reflection of the peaceful scenery. The Shoyo-en is especially popular in autumn when the area’s maple trees turn vibrant red. 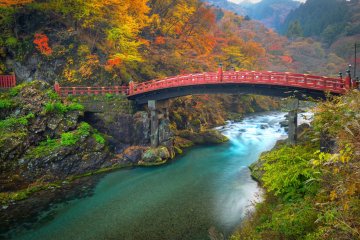 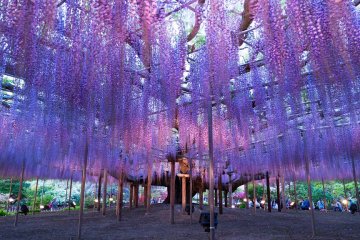 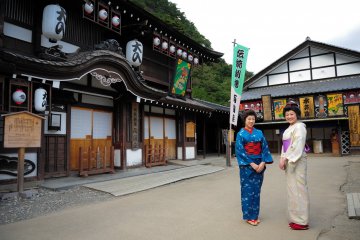 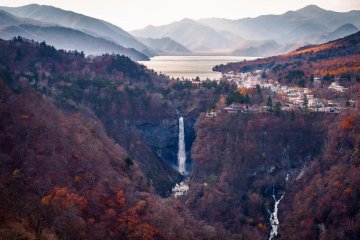 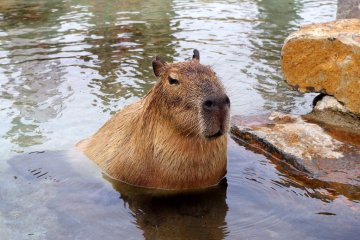 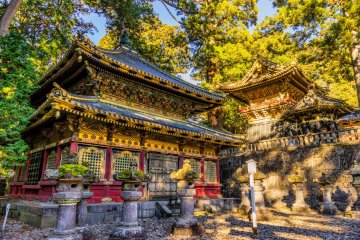 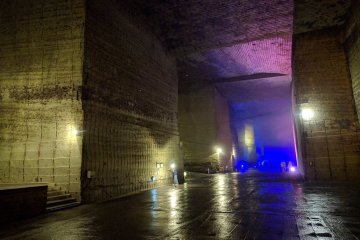 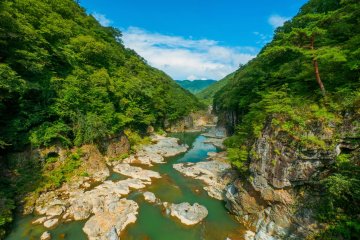 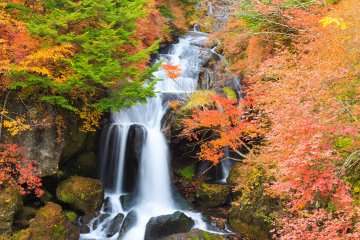 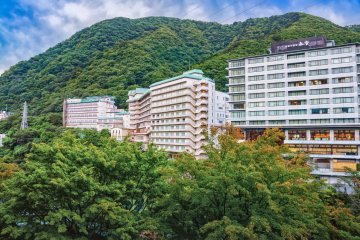 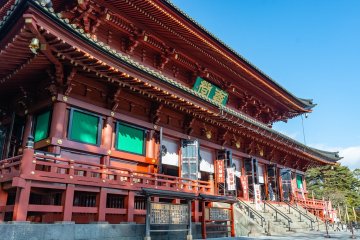