Exploring the best cycle road in Izu by e-bike

The Nishi Izu Skyline has been dubbed the best cycle road in Izu, but because this route will afford you incomparable views of iconic Mt. Fuji over Suruga Bay, it really deserves to be dubbed one of the best cycle roads in Japan.

Now I do not consider myself a cyclist. I am pretty active, running at least 15 to 20 km total every week, but I have little experience cycling outside of mamachari (mom's bike) errands. But we were promised e-bikes for this cycling tour, so I wasn't too worried about the distance we were to cover (a total of 37 km).

Our group met at Merida X Base, a facility where you can rent bikes, arrange for guides, use the lockers and relax in a hot spring afterwards. From Merida X Base, we drove up to Daruma Mountain Kogen Rest House.

With our relatively late start time (10 a.m.), it would have taken too long to cycle up all the way from Merida X Base, but if you're planning a full day of cycling with an early start, it would be an 18.8 km uphill ride from Merida X Base to Daruma Mountain Kogen Rest House.

We mounted our e-bikes for the first time at the Rest House. It was a difficult uphill ride from there, but even for a novice cyclist like me, it was a total breeze, thanks to the various e-assist modes. If I wanted to work harder, I opted for the least power consuming "Eco" setting. For the really steep parts, I opted for the highest "Sport" setting. But even if I used this setting the whole time, the bike would have served me for 90+ kilometers. I wanted one of these amazing e-bikes!

Along the way, we were rewarded with views of Mt. Fuji, but because of our elevation, Mt. Fuji looked like it was floating mysteriously. We cycled up and down hills so verdant and unusual it felt for a moment we cycled our way out of Japan.

Then we headed downhill towards Michi no Eki Izu-Tsukigase to break for lunch. We shared the road with speeding motorcycles and cars, which can be a bit unnerving. This is where you would want an experienced guide, like we had, to lead the way and keep you safe.

The last leg of our cycling tour from Shuzenji station back to Merida X Base was a pretty flat course along the idyllic Kano River. The sun was setting, giving the field of pampas grass an ethereal golden glow straight out of Tolkien's Middle Earth.

And then, as if to give us one final memorable treat before the day ended, up loomed Joyama, a 342 meter high rock part of the Geosite of the Izu Peninsula UNESCO Global Geopark.

The majestic Joyama paired with the gushing Kano River has been selected one of the 100 Scenes of Nature in Shizuoka Prefecture. It is perfectly understandable why people in ancient times considered Joyama home to a mountain god.

If you are a cyclist, then you already know the joys of exploring a new place by bike. But if you aren't but would like to consider an alternative, more active way of traveling and seeing Japan, I cannot recommend this cycling route enough. With the e-bike, it is perfectly doable.

Merida X Base is an easy 7 minute walk from Takyo Station. 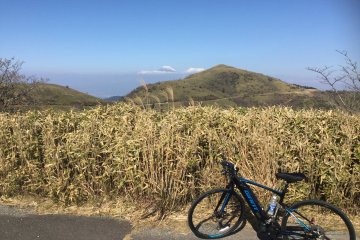 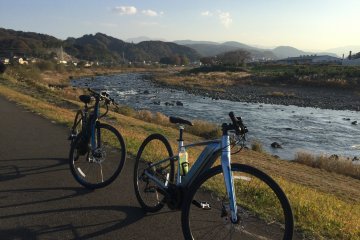 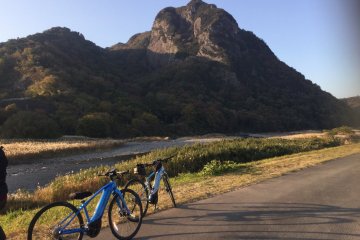 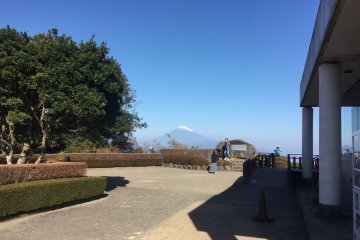