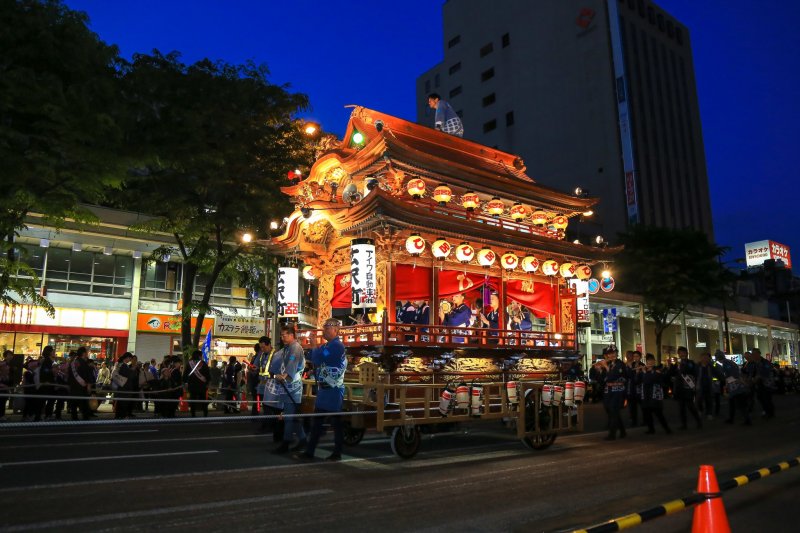 During the evenings of the three-day Hamamatsu festival during Golden Week, a free procession of large ornate parade floats, each one representing a district of Hamamatsu, are paraded through the streets.

This starts around 6.30 pm (sunset) and continues very late into the night (although officially till 9 pm) in the area around the train station. Children playing traditional Japanese instruments are sat on the floats whilst the adults carrying lanterns and flags, make noise, cheer and pull the floats along the road. Some of the adults even sit on top of the floats and make noise. As the floats make their way through the city, the adults walking beside will stop the float and do some chanting, running around in circles and cheering with their lanterns before resuming their walk. It's quite spectacular to watch, and the children look so cute in their traditional clothing!

The older floats have a more traditional style and are beautifully decorated with ornate wood carvings. Some of the newer floats have been designed with their district in mind—the district which includes Hamamatsu castle has a castle-shaped float!

There isn't one main route which all the floats take because there are so many (over 70). It's split into three groups and each group has its own route through the city. If you want to see all the floats you'll need to come on all three nights and place yourself on each of the different routes. Check with the tourist information who can tell you what the routes are and can give you a handy guide with a detailed map. Usually the parade happens around the train station towards ZaZa city on Kajimachi street. Look for the roads which the police close around 5 pm.

If you want to get up close and personal with the floats, head down to the plaza between JR-Hamamatsu and Shin-Hamamatsu train stations during the day. A few of the floats are displayed with information on their history (in English!) and some of the volunteers will talk to you about the craftsmanship and what the float represents. Believe me, these floats are works of art and some are over 100 years old.

Head on over to Nakatajima Dunes on the opening day to witness this kick-off event from 10am, where over 100 kites are flown over the sand dunes in an aerial duel.

The Dr is in! Nicola is an English ALT working in Hamamatsu Shizuoka. Originally from the UK, Nicola has a taste for fun, adventure and things that go bang.