An otsu-e of a mythical goblin playing the shamisen and drinking sake (Photo: Lee Tan)

A preserved Edo-style mansion in Sakamoto

Kunin Yashiki, also formerly known as Okamoto Mansion and the Mansion of the Public Officer, is situated in Sakamoto. The city Sakamoto was important for its position at the foot of Mount Hiei, as it provided supplies to Enryakui-Temple which sits on top of the mountain. In its heyday, it was a bustling town with sake shops, finance houses and merchant warehouses.

These buildings belonged to the Okamoto family, which has roots in the Kunin, a group of monks from Enryakui-Temple who were charged with the collection of land taxes. Built in 1864, the building remains largely unchanged today, and is a fine example of Edo-style architecture of the upper class. In 2005, the main building, the rice storehouse and the stables were awarded the status of 'Cultural Treasure of Otsu City'.

There is a small admission fee of ¥200 to enter this quiet and little-visited building. Upon entering, on your left, you will be greeted with an otsu-e, or screen drawing, of a mythical goblin playing the shamisen and drinking sake. Otsu-e is a traditional genre of painting from the Edo period, and the name is derived from the post town of Otsu. Further in is the kitchen, where you will find an old oven called 'okudo-san' in the Kansai region.

Inside the Yashiki, you will find a painting by Yokoi Kinkoku on one of the sliding panels. He was a painter and a Jodo sect priest who lived in Sakamoto in the last years of his life. It is possible to admire his painting while gazing out at the Japanese garden from the sitting room.

The roof tiles of the adjoining storage building bear the coat of arms of Mt Hiei's Enryaku-ji Temple, an indication that it was used to store the collected land tax such as rice and grains for the temple. It is believed that this is the oldest part of the Okamoto estate, dating back to 1794.

The stable served as a facility to shelter the horses of aristocrats and noblemen who came to Sakamoto to visit the Monzeki, or the head priest of the temple and a member of the imperial family, of the Shiga-in Temple. They were not allowed to enter the temple's premises on horseback.

While the main building, storage house and stables are all that is left of the property today, it is still an interesting glimpse of the living quarters of the town's public personages. 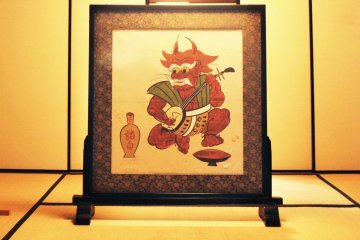 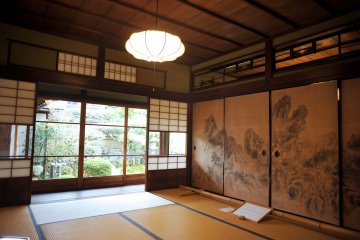 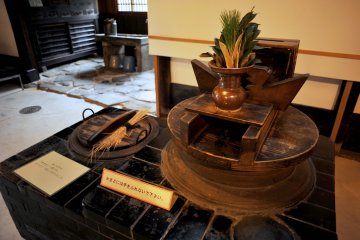 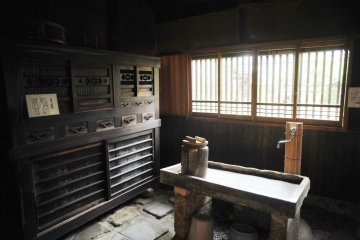 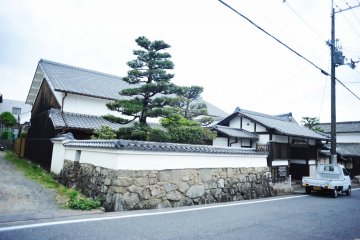 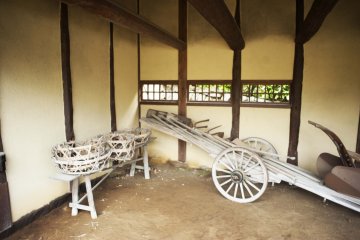