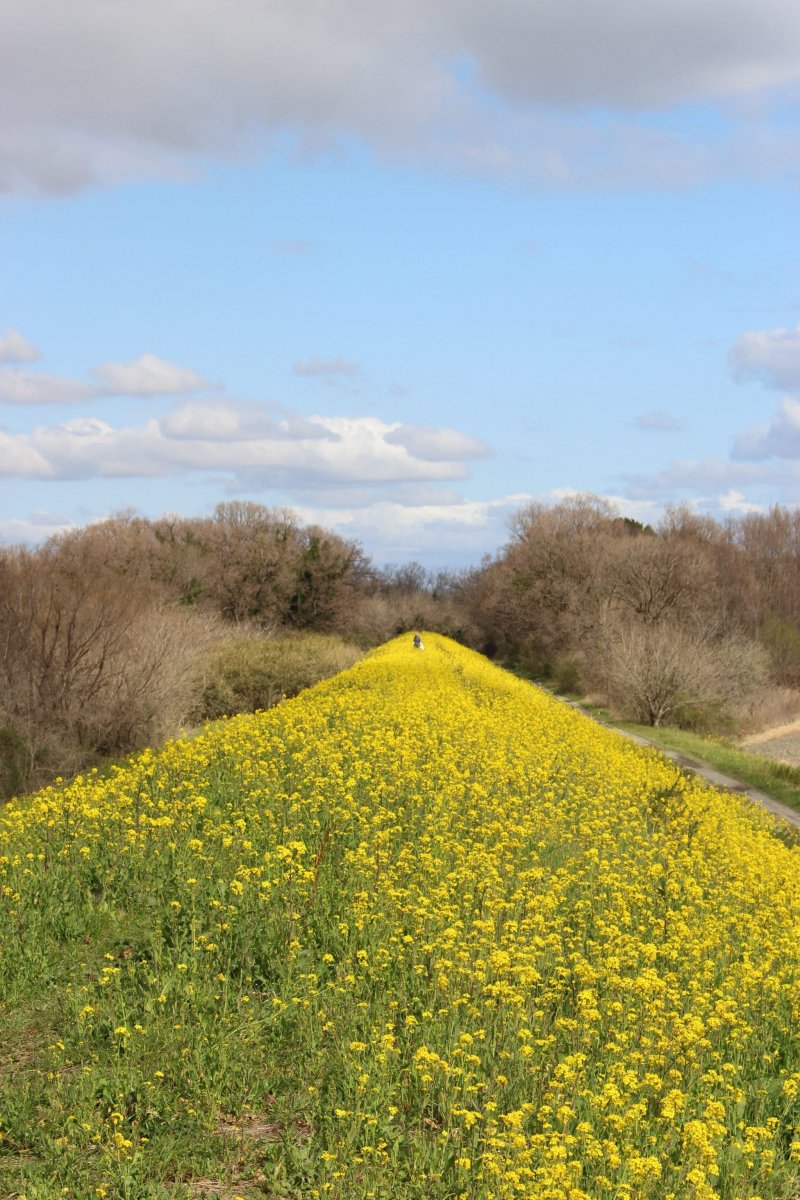 An embankment of rapeseed off the main path (Photo: Lynda Hogan)

Rapeseed Along the Arakawa Kawajima

Stunning spring scenery off the beaten path in Saitama

An embankment of rapeseed off the main path 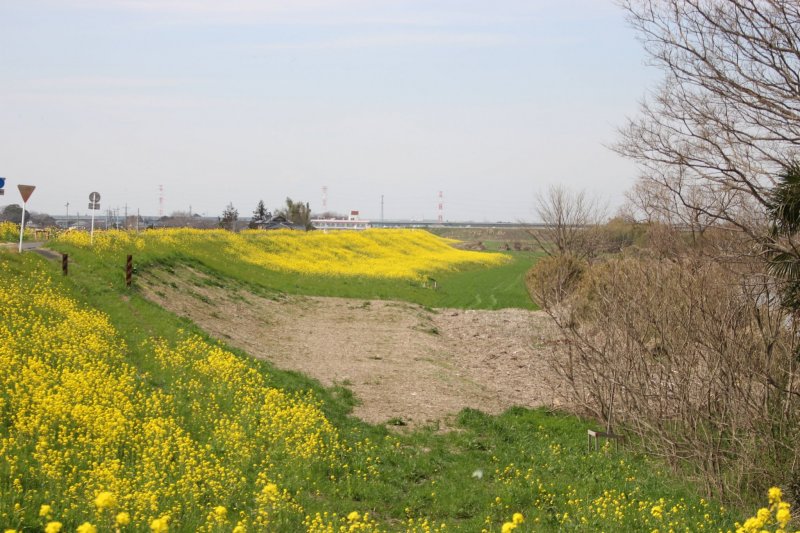 Part of the embankment, and hence the rapeseed, ravaged by typhoon Hagibis in 2019 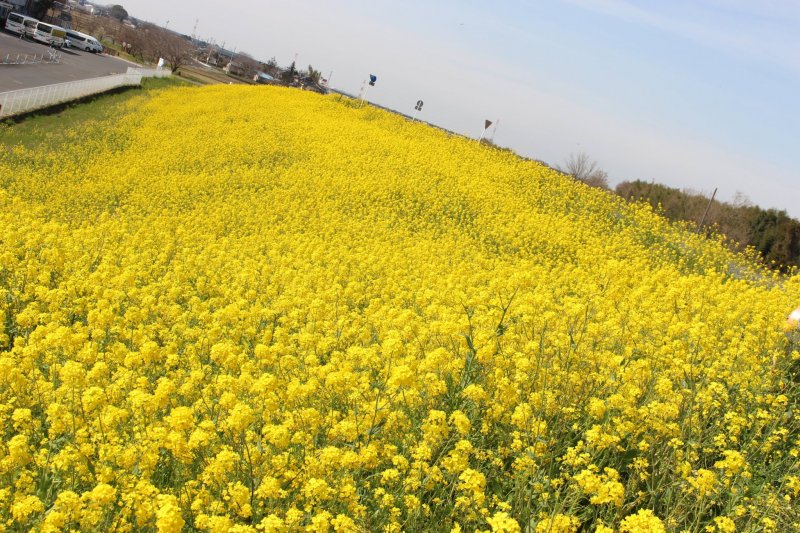 Thousands of rapeseed line the embankment for miles 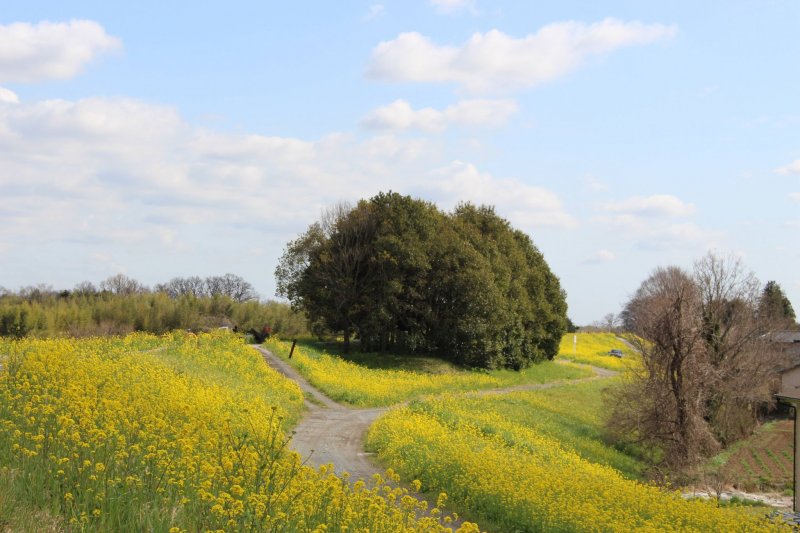 There are old country roads in parts, that are still used by locals 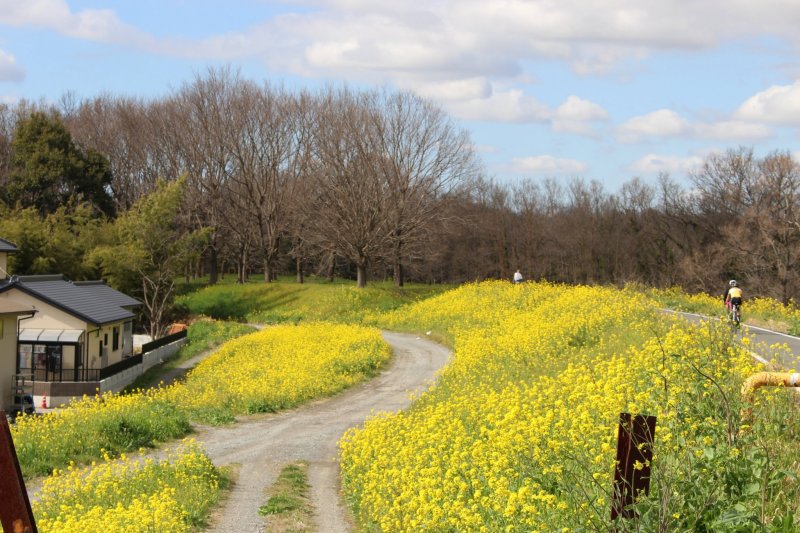 On the Ageo end of the Arakawa embankment in Kawajima there is a nature restoration area with a forest. 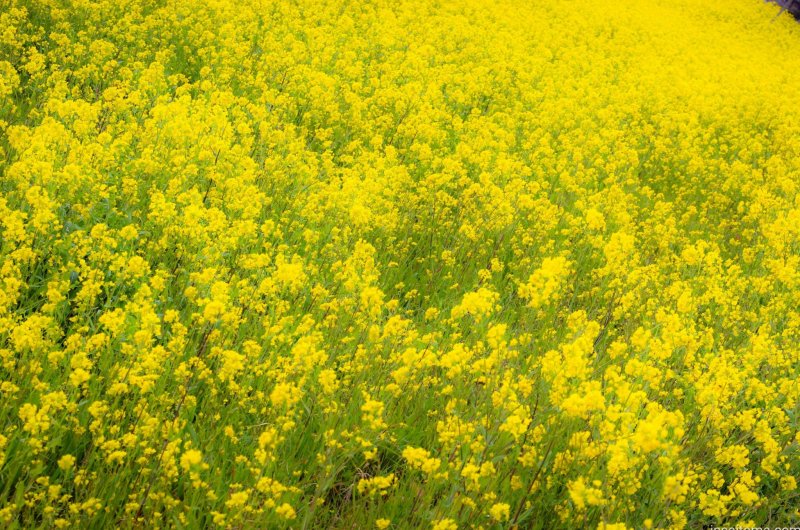 Bright yellow rapeseed, one of the harbingers of spring in Japan. 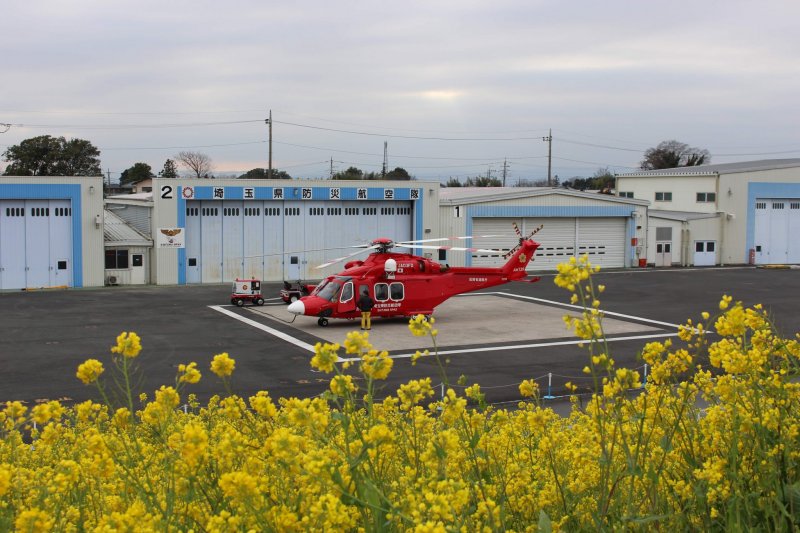 Along the route you pass the Saitama Disaster Prevention center where you can often see helicopters. 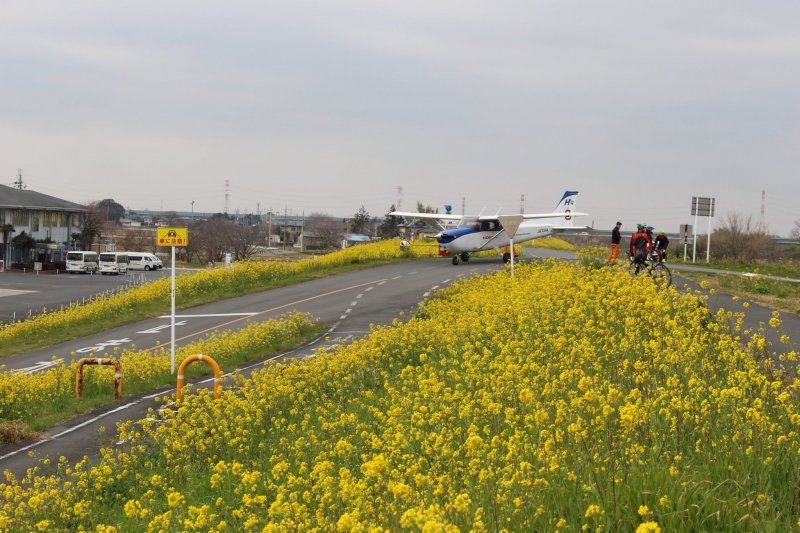 The Aviation center is part of the private Honda Airport, so you can often also see airplanes. 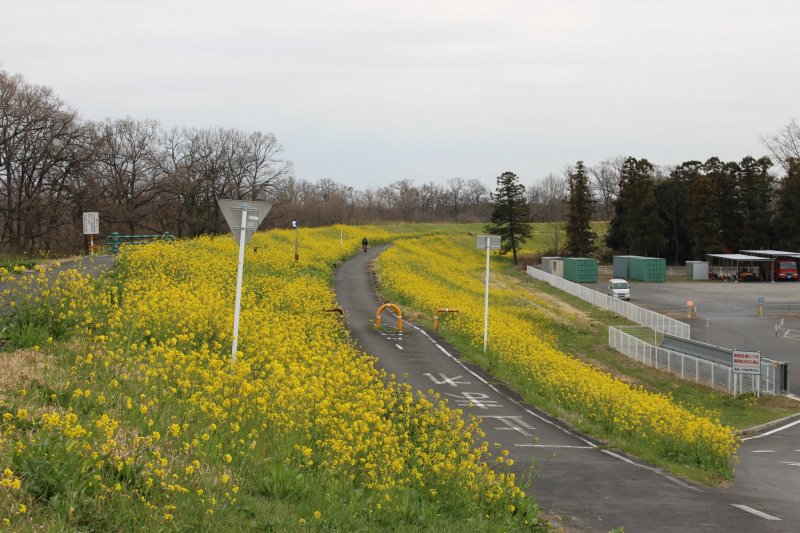 The path is mainly used by cyclists. Part of the course is divided for pedestrian and cyclists. 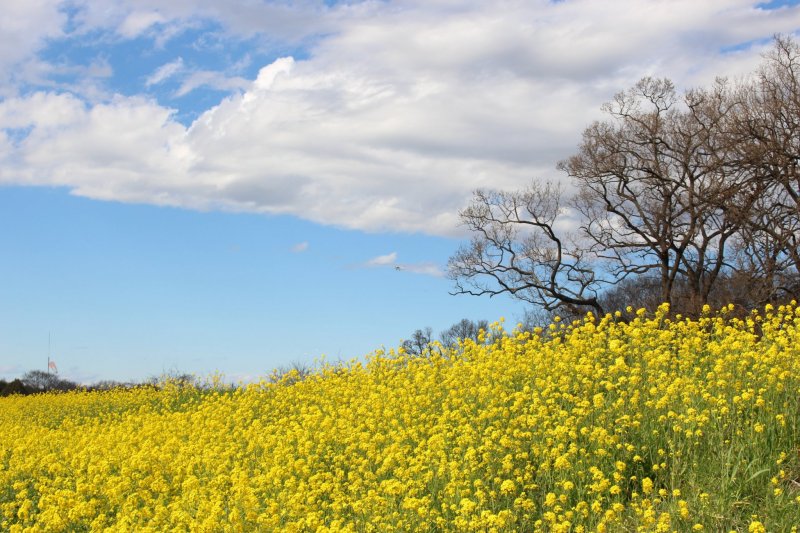 On a fine day, you can enjoy the contrast of a blue sky with the beautiful yellow rapeseed. 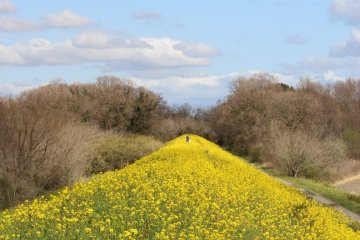 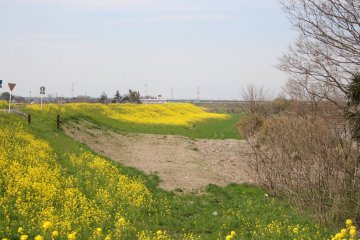 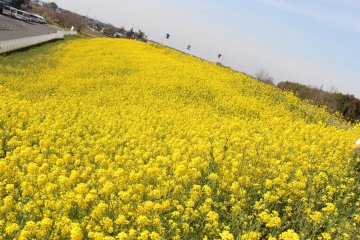 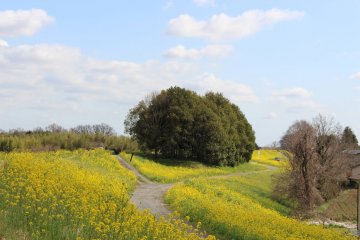 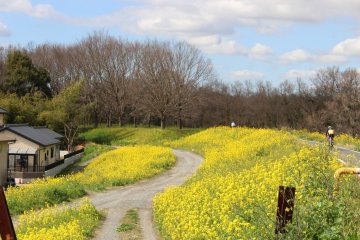 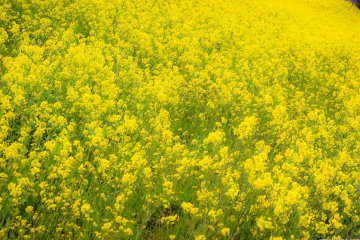 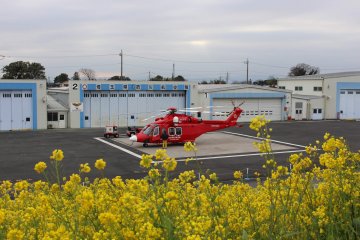 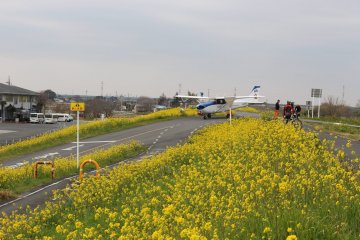 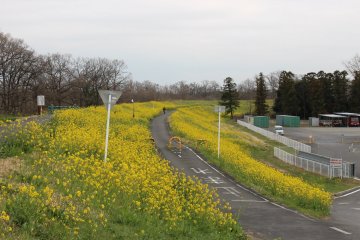 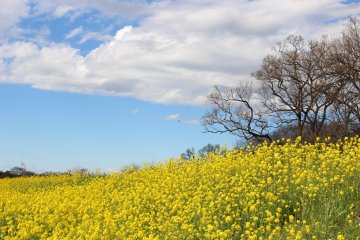 Along the Arakawa embankment cycle route that passes through several cities and towns in Saitama Prefecture, there are thousands of stunning bright yellow rapeseed currently in bloom. The rapeseed or canola blossoms (also known as nanohana in Japanese), are a long lasting flower. In Saitama Prefecture, and in the Kanto area of Japan in general, you can usually see the rapeseed from mid-February to early April, with prime viewing in March.

In Saitama Prefecture you can find rapeseed in many places, particularly along river embankments. I personally enjoy the scenery along the Arakawa (Ara River), specifically the view along the stretch of the Arakawa embankment cycle route in Kawajima Town. It is approximately four kilometers from Demaru Nakago on the border of Ageo City to the Tarouemon Bridge bordering Okegawa City.

The embankment is mainly used by cyclists, but it is a public path that pedestrians can use too. There are just a handful of places where the path divides into two: one side for cyclists, one side for pedestrians. Despite the stunning beauty, the area is rarely used and as such is a safe place for a scenic walk in this time of Covid-19. On the Demaru end of the course, there is an unspoiled forest where you can also take a stroll. There is a fishing area there too.

Nearby is a powered paragliding club "Air Wing". Sometimes you can see people overhead paragliding, but it is more common to see people skydiving. The Tokyo Skydiving club has its offices in this area and the planes go from the Honda Airport which is also visible from the embankment. It is on the Tarouemon Bridge end, where you can frequently see planes, helicopters and skydivers around the privately owned Honda airport.

As this is an off-the-tourist-trail destination, it is quite difficult to get to by public transport. You can either take a Tobu Tojo or JR line to Kawagoe Station or the Takasaki Line to Okegawa Station. The Arakawa embankment in Kawajima is quite a distance from each station, so unless you have a bicycle with you, it is recommended you get a bus to Yamagayato bus stop.

By car, the rapeseed along the Arakawa is about a ten minute drive from the Kawajima interchange of the Keno Expressway in the direction of Okegawa.