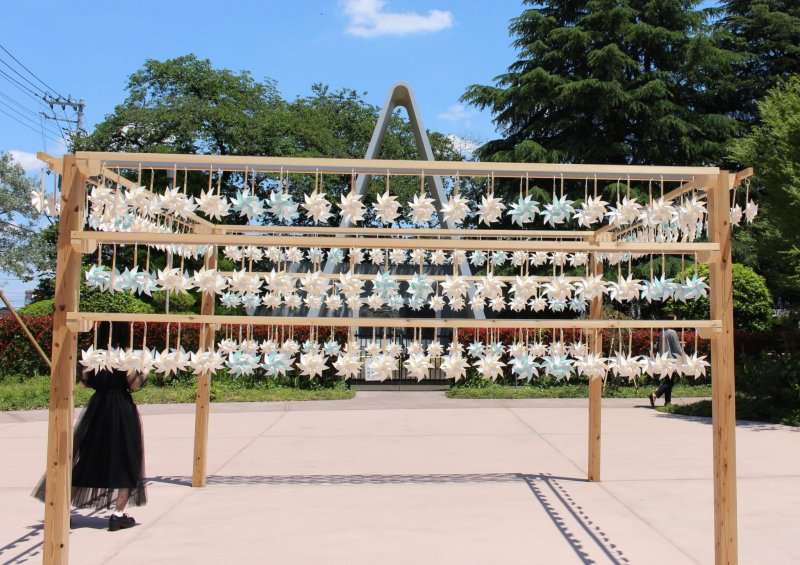 New section of the pinwheel display in 2021 (Photo: Lynda Hogan)

The less famous prelude to the wind chimes

Kawagoe Hikawa Shrine needs little introduction within Japan. Even internationally, if you don't know the shrine by name, you might recognize it from photos of the annual wind chime event at the shrine that have gone 'viral' thousands of times over. But what you might not know unless you are a local, is that before the summer wind chime event, there is an equally photogenic pinwheel display at the shrine.

For the month of June, Kawagoe Hikawa Shrine displays approximately 2000 pinwheels at the shrine. Most years the main display of 888 pinwheels in a tunnel are blue and white. There are 888 as in Japan the number is considered to be lucky in love. In 2021, they added a new area in front of the main stone gate to the shrine. The pinwheels in this area are cream and white. In the past, for special occasions they had other colors. For example, in celebration of the Emperor's ascension to the throne in 2019 they had red and white pinwheels.

Kawagoe Hikawa Shrine is located away from the main tourist area of Kawagoe. However, most of the tourist buses pass close by. Also, the local buses bound for Kawagoe City Hall from any of Kawagoe's station stop within a few minutes walk of the shrine.

Until this year, the shrine had three main car parks. However, since spring they have all been closed due to the renovations at the shrine. There is no longer official parking at the shrine. The former "dai ni" parking lot though is now a coin parking lot. It costs 100 yen for half an hour.