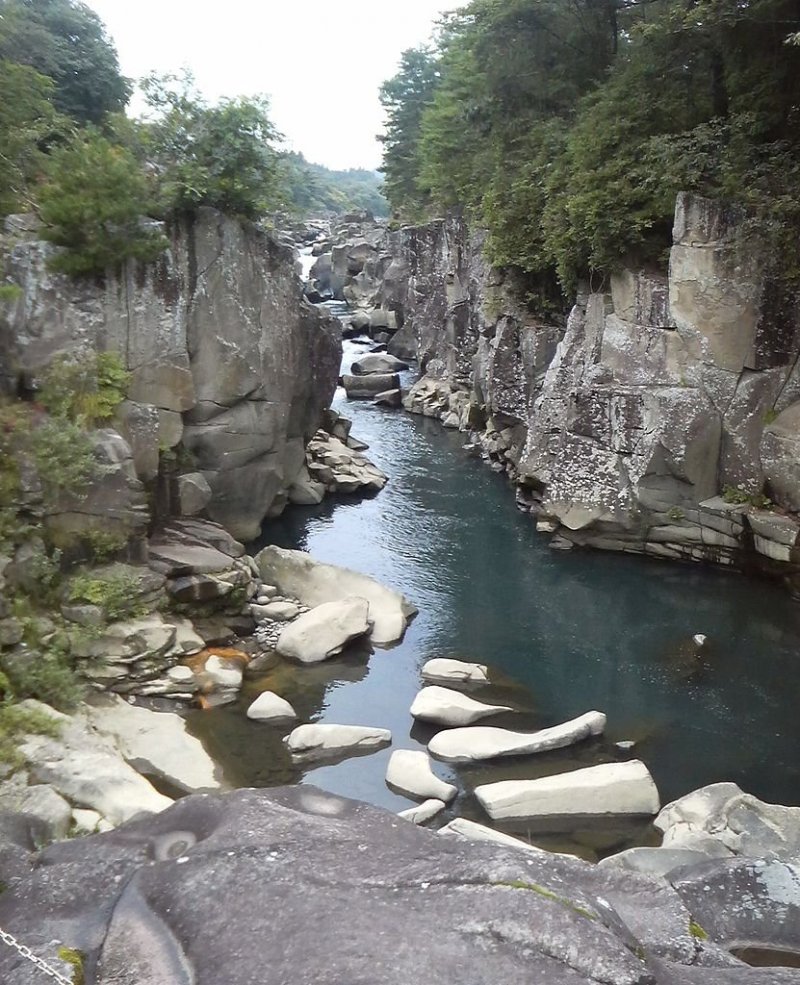 The Genbikei Gorge is a 2 km stretch of the Iwai River, known for its rugged landscape and dynamic whitewater stretches. The rocks and cliffs are a national monument and are lit by cherry blossoms in spring, azaleas in summer and glowing in autumn Red, orange and yellow tones of the leaves framed.

The sound of the rushing water enchants visitors on the viewing platform and on the hiking trail that runs on both sides of the gorge. Horse-drawn carriage rides are also possible from April to October.

In addition to the breathtaking view, many people visit the gorge for the local Genbikei specialty, the popular flying "kakko dango" (sweet sticky rice balls). Along the gorge there is a pavilion where visitors can order from a rustic shop on the other side of the gorge using a hanging basket.ignated a Place of Scenic Beauty and Natural Monument in Ichinoseki, Iwate Prefecture, Japan.

Witness the 'flying dango' over Gembikei Gorge, delivered by Kakko-ya.

Most people go to Hiraizumi for the temples listed as World Heritage Sites. However, you can’t go to this area and miss seeing this stunning gorge.

Dango in a Gorge

The Jagged Beauty of Genbikei Gorge

Genbikei Gorge is located just outside of Ichinoseki City in Iwate Prefecture. The gorge is shaped by the rapid flowing water of the river, resulting in smooth and interwoven

The Motsuji Temple was once a large and important temple of the Tendai sect and consisted of numerous buildings. Today Motsuji is best known for his garden, which tried to recreate the Buddhist concept of the pure land or "Buddhist paradise". The history of the temple tells that in 850 the priest Ennin, the third abbot of the Tendai sect, was traveling in northern Japan when he got lost in a thick fog in this area. When Ennin looked at his feet, he noticed the hair of a white stag. Ennin approached the stag, but it disappeared in the fog. A silver-haired old man appeared in his place and told the abbot that this was a sacred place and that he should build a temple there. Ennin sensed that this old man was an incarnation of Buddha Yakushi and followed his advice. Motsuji has some buildings that are extremely interesting for visitors. This includes the main hall of the temple and a treasure house where Motsuji's historical and cultural artifacts are exhibited.

Chusonji is a Buddhist temple in the city of Hiraizumi in southern Iwate Prefecture. It is the main temple of the Tendai sect in the Tohoku region in northern Honshu. The temple is said to have been founded in 850 by Ennin, a monk associated with Enryakuji Monastery and the third abbot of the Tendai sect. Ennin is also known for the autobiographical record of his travels and studies of Buddhism, considered by some to be one of the greatest travelogues in the world. In the dedication commitment for the Chusonji Temple it is written that all travelers, regardless of their status, will be lovingly welcomed by the Buddhas and would receive their blessings without exception. In 1337 a fire destroyed many of the temple's halls, pagodas, and treasures. Nevertheless, more than 3,000 national treasures and important cultural assets survived, including above all the Konjikido, the small, golden Amida hall, which was the first building to be declared a Japanese national treasure.

Tsuriyama Park is a nice hillside park located in Ichinoseki City. The park is one of the most popular cherry blossom viewing spots in the city and features long pathways