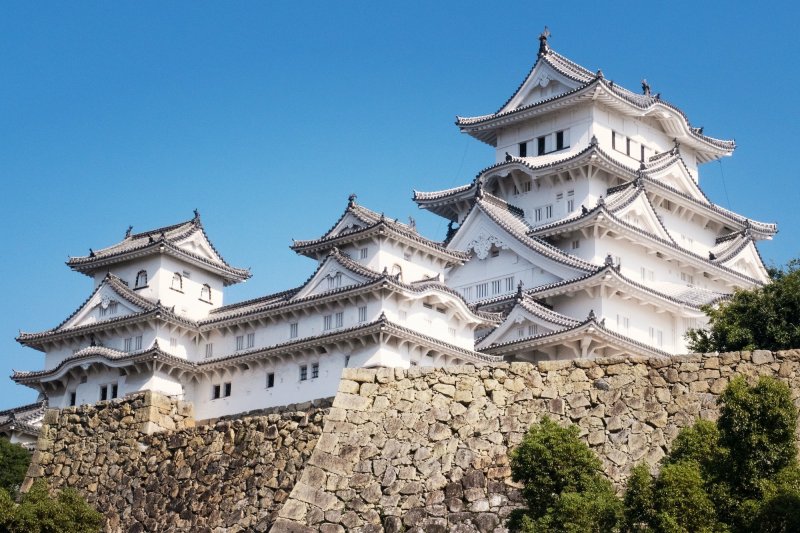 Himeji Castle is one of the twelve original castles left in Japan and a top destination for tourists from around the world. Known as the White Heron Castle due to its snowy exterior, the castle has been designated both a national treasure and a UNESCO World Heritage Site.

The first stones for Himeji Castle were laid in the 1400s, but the castle’s current layout dates back to 1609. The location of Himeji Castle was considered quite strategic, as it lies along the western approach to Kyoto, which for many years was the nation’s capital. Despite its defensive fortifications, the castle was never besieged and even survived the bombs of World War II. Valued as one of Japan’s twelve remaining original castles, Himeji Castle was awarded UNESCO World Heritage status in 1993.

The entire complex recently underwent a five-and-a-half year renovation process, in which new roof tiles were installed and the white exterior walls were replastered. The interior of the castle is sparsely furnished, though visitors will be able to appreciate the level of craftsmanship evident in the wooden beams and floors. From the top floor of the keep, visitors are treated to a sweeping view of the castle grounds and battlements and the city beyond.

The castle’s Sannomaru area – a large open grassy area that can be entered free of charge – is a particularly popular photo spot during the spring cherry blossom season. The Sannomaru is also the site for a selection of festivals throughout the year, including a moon viewing celebration in September.

A short walk to the west of the castle lies Kokoen, a modern landscape that was designed to mimic a series of traditional Japanese gardens. Nine individual walled gardens occupy the site of the former west residence of the local feudal lord. Each of them highlights a specific natural feature, such as bamboo or pine trees or flowers. Two tea houses are located on site, and guests can enjoy a drink and light refreshments while gazing at the carefully tended scenery.

While part of the grounds are free, admission to the castle keep is ¥1000. (A combination ticket is available for both the castle and Kokoen.)

The White Heron Castle of Himeji

Originally built over 400 years ago, Himeji Castle still stands today as a testament to the craftsmanship of its ancient builders. Also known as the White Heron Castle, it offers a firsthand glimpse into Japanese history.

Himeji Castle is currently undergoing renovation work (until 2014). In this photo story however, I've captured the castle before the restoration project started.

The most visited castle in Japan, Himeji Castle, nicknamed the “White Heron” has been standing proudly on top of a hill called Himeyama for 400 years.

Himeji Castle is currently in the midst of a five-year renovation process. This is a special chance to experience a Japanese castle in a whole new way.

Often, when visiting historic locations throughout Japan, one can read things concerning the original building of the structure and later renewals or reconstructions. But

Himeji castle is the biggest, the most visited and definitely the most famous castle in Japan and, now that the restoration is coming to an end, we can finally admire its full beauty without any cover. So take a little break from your daily life and go admire this masterpiece of architecture.

The Himeji 588 Guesthouse is an affordable hostel located conveniently between Himeji Station and Himeji Castle.

One of a chain of budget hotels in Japan, Chisun Inn Himeji Yumesakibashi is convenient for Himeji Castle and the town's other attractions.

If you are hungry in Himeji, skip the Big Mac and treat yourself to a quality Japanese version of a classic American hamburger at Cafe Lamp.

For travelers who prefer a Western-style breakfast, try a local Himeji favorite at a bargain price.

Watami is a bistro with a roll call of everything you imagine when the phrase “Japanese dining” is mentioned, from sashimi and okonomiyaki, to beef tataki and grilled fish, so much so it is more like a showroom for a Japanese cooking school rather than an inn filled with regional Hyogo specialities. Despite its appearance in Nagoya and Tokyo, it attracts clusters of Japanese office workers, all paying homage to its delightfully presented dishes in an izakaya or Japanese tasting plate like style, with smallish portions that tempt you to order one of everything, every one so well presented so that you can't possibly imagine being overweight in them.

Come for the Castle, Stay for the Sake: Himeji

Himeji Castle is a both a national treasure and a UNESCO World Heritage site, and considered one of the best examples of Japanese castles.

Bisen Fukuda was a Japanese painter, most well-renowned for his landscape art pieces. A special exhibition at the Himeji City Museum of Art looks into works created through his life, including depictions of Japanese national parks and the Fuji Five Lakes area to name a few.

Koko-en Garden - a gorgeously groomed Japanese style garden that is just across from Himeji Castle.