"You are what you eat", the proverbial saying is taken very seriously in Okinawa. Japan's most southern islands are listed as one of the so-called "Blue Zones" in the world where people are said to live much longer than average. Eating healthily is one of the key ingredients in a long life. Eating good food starts with your selection of healthy ingredients and a healthy style of cooking.

Let's learn about the Okinawa "Way of Food" from Kazumi Kayo, a local of Naha City, the capital of Okinawa Prefecture.

She set up and runs Yonner Food Cooking Studio where she offers classes in Okinawan cooking. Her cooking studio is a real lived-in kitchen with a friendly, homey atmosphere. It is easy to relax here and enjoy Kazumi's lesson. It is almost like you are cooking with a friend in her kitchen.

Kazumi, who was born and grew up in Naha, has been running Yonner Food for nearly 15 years now. Before setting up by herself, she helped at another cooking school for several years. In fact, she also attended many other cooking schools to learn more about Okinawan food. Her interest in learning to cook the local cuisine was sparked by her work as food stylist when she had to arrange food for presentation in photographs and videos.

Now, combine royal cooking with commoners’ cooking, add many years of experience, and what you get is an Okinawan culinary expert. Kazumi does not only teach foreign guests but also many young Okinawan young people who have lost touch with traditional food culture due to the influx of American-style fast foods.

The hibiscus flower captures the lifestyle of sunny Okinawan islands well. Due to its sub-tropical climate, the temperature during the day stays mild year-round with over 20 degrees. Colorful hibiscus flowers can be seen everywhere. Their bright red and orange blossoms sprinkle the landscape with dots of color and they brighten the mood of everyone who sees them.

For centuries Okinawan people have been using the culinary and the medical properties of hibiscus in herb teas, supplements, jams and fresh in salads. There are over 1,500 varieties. Hibiscus contains vitamin C and minerals, and it used as folk medicine to relief fatigue and lower blood pressure.

A beautiful cup of hibiscus tea indicates that ‘medicine for life’ here also means to nurture our soul and engage all senses to brighten up our life. This is surely a holistic concept of well-being.

If you got an appetite now for Okinawa food and you would like to know more about Kazumi's cooking classes, please visit Okinawa Cooking at Yonner Food (Part 2).

Kazumi will meet you at a central place in Naha and walk with you to the food market first, and then you will walk together to her studio. When you sign up for a class, detailed information about the meeting place and time will be provided. The studio is located 20 minutes from the center of Kokusai Dori. If you take a taxi, then the ride takes 10 minutes. 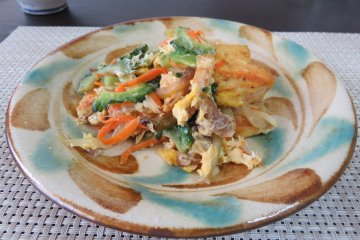 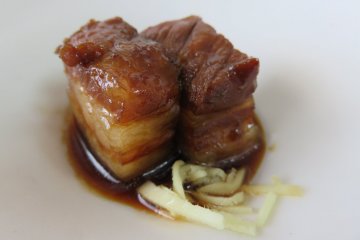 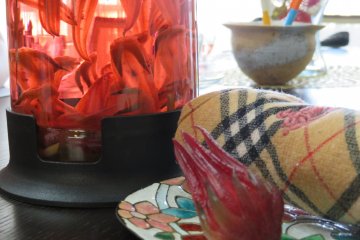 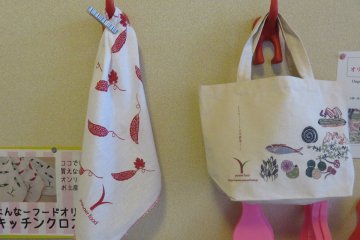 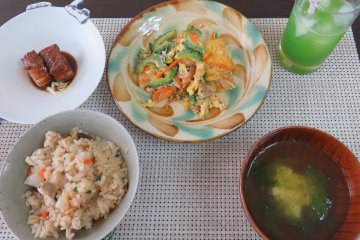