Want to feel like your seeing Kyushu from the air without ever actually leaving the ground? Make your way to the Kokonoe Yume Grand Suspension Bridge just north of the Kuju mountain range in western Oita prefecture.

The bridge seems to float over the forested valley below, constructed at an impressive 777 meters off the ground. It is 390 meters long to cross from one side to the other, and takes on average twenty minutes to cross. These stats make it the longest and highest pedestrian suspension bridge in the world and as such, it offers spectacular views. From the center of the bridge, you can see two waterfalls, one of which is listed on Japan's 100 most famous waterfalls list. In autumn, the gorge here is awash in fall colors and this is a favorite spot for leaf-peepers in Kyushu.

At the ends of the bridge, keep your eyes peeled for two unique shrines. The "white snake shrine" commemorates five snakes, all of whom attempted to ascend to heaven. Only three reached their goal, while the other two were turned into the nearby dual waterfall seen from the bridge. The "white bird shrine", whose origins are a bit mistier, allegedly dates back 1500 years.

The bridge is designed to hold 1,800 people, though for some visitors, the slight sway caused by that number of feet on the bridge deck may be a bit too much if you're prone to vertigo! The bridge actually aims to attract 300,000 visitors per year, a number that it smashed in its inaugural year (2006) in only the first four weeks!

There are parking areas on either side of the bridge, although the western parking lot offers both more spaces and more diversions. You can chow down on a local Kokonoe beef burger or grab some of the other snacks on offer. A local tourism office here can help you for journeys in and around the area. There are numerous local onsen in which to soak any travel-weary bones, while hikers and nature lovers are only a short drive from the trails of the Kuju Range and the Tadewara Wetlands. 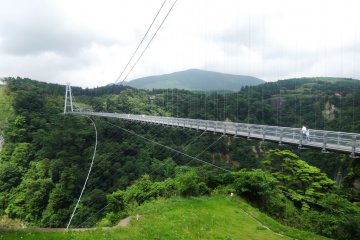 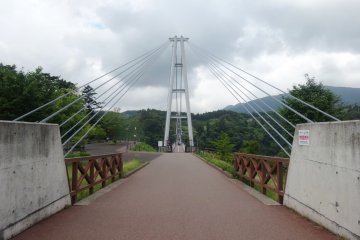 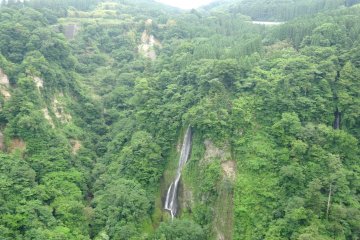