The soup is made from organic vegetables; the range of flavors depends on what's available. It comes with bread and a basil sauce that's a lot like pesto. (Photo: Laura Welch)

The soup is made from organic vegetables; the range of flavors depends on what's available. It comes with bread and a basil sauce that's a lot like pesto. (Photo: Laura Welch)
Laura Welch   Oct 26, 2014 - 3 min read

In Japan, importance is placed on knowing where fruit and vegetables have been grown. In the supermarket, labels clearly state the prefecture of origin; restaurants sometimes do the same. Certain areas of Japan are famous for certain produce, and there's greater prestige for apples from Aomori than from other regions, for example.

However, the conditions that fruit and vegetables are grown in aren't quite given the same priority in the public consciousness. Organic food is nowhere near as prominent as in other developed countries, which is why I was particularly pleased when I was introduced to Za Cafe.

Just off part of the covered shopping arcade, Za Cafe is a lovely little place, made better by the fact that everything on the menu is made with organic vegetables. To get there, walk away from Sendai Station through Clis Road and keep going straight – pass Fujisaki Department Store and keep going until it appears on the right. It's more-or-less opposite a Family Mart convenience store.

At first glance it looks quite sophisticated and possibly imposing, but the atmosphere is relaxed and friendly. Take the name for example: on the sign is a stylishly written kanji character, pronounced “za”, but when you know that “Za Cafe” is how Japanese people usually pronounce “The Cafe”, then it all becomes a big play on words.

The owner is very welcoming, and can speak a little bit of English to help you out – the menu has some English on it, too. Many of the options on the menu are suitable for vegetarians, but make sure you ask the owner about meat and fish, or you could end up with tuna pasta.

One of the main dishes, and my recommendation, is the soup. There are several flavors, based on the availability of the vegetables (asparagus is seasonal). I chose a soup set – tomato soup, bread and pesto-like basil sauce with a drink (usually tea or coffee, but I swapped for wheatgrass juice).

It's quite a thin soup, but the full, fresh tomato flavor was undeniable. The wooden spoon that came with it was a nice touch, too. The bread was mostly ordinary, but fresh. The foccaccia-style piece was delicious, and it all went really well with both the soup and the basil sauce.

The set on its own makes for a nice, light lunch, but I ordered an onion gratin as a side. It wasn't quite as good as I'd expected – there was less onion flavor, and more of a potato-like texture – but it wasn't bad by any means. My friend seemed to enjoy her tomato one much more. She was also impressed by the “green pita sandwich”, full of fresh lettuce and soft, perfectly seasoned edamame (young soy bean) and potato salad. The wheatgrass juice came with syrup, but I enjoyed it without, savoring the slightly bitter taste reminiscent of green tea.

The Za Cafe is perfect for a refreshing, light lunch and considering that the cafe uses organic vegetables, the prices are very reasonable. Add in the occasional live music performance, and it results in a popular cafe, with a full house at weekends.

One of my favourite things about Japan is the wonderful variety of food, and I love to share what I find. When I'm not eating, you might find me singing karaoke or walking around hoping to make new discoveries! 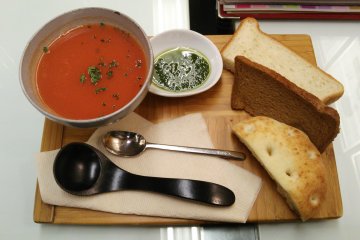 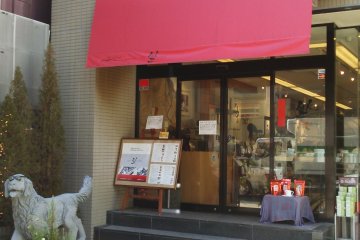 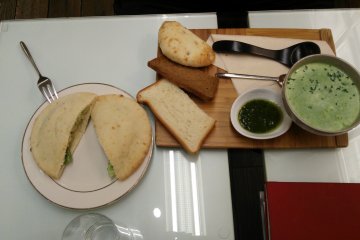 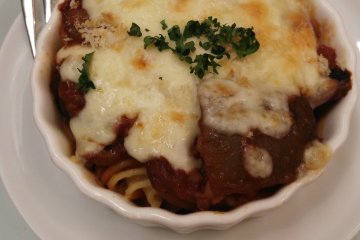 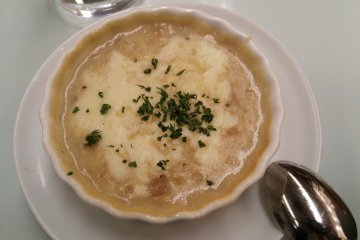 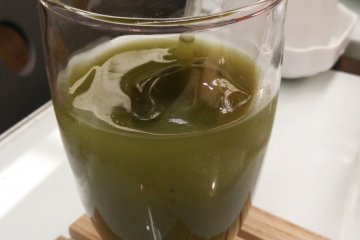 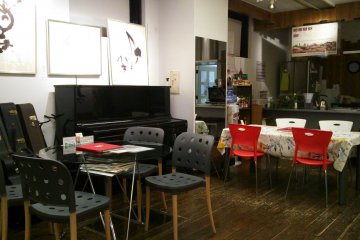