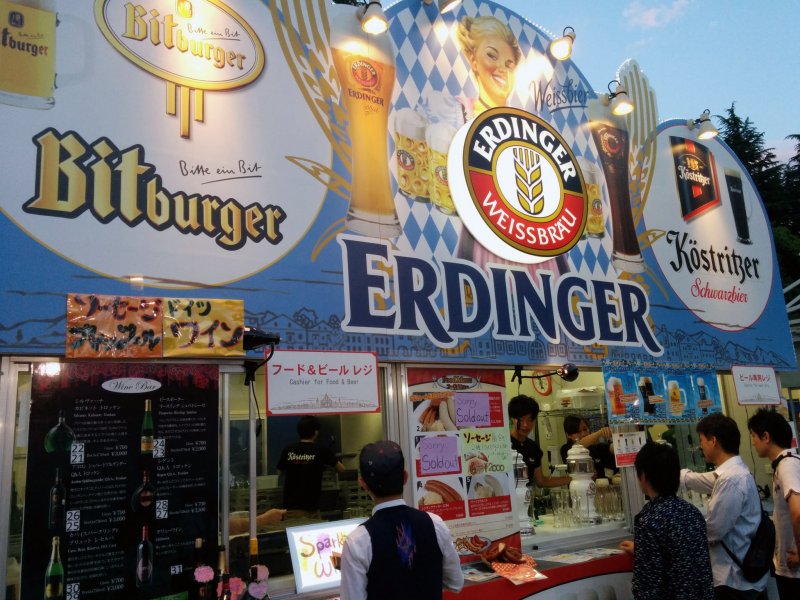 Close up of one of the beer booths (Photo: Justin Velgus)

Oktoberfest may be a German festival of drinking and good times, but the popularity of beer in the Land of the Rising Sun has encouraged Oktoberfest to become a regular happening around Japan as well. Tokyo has its own Oktoberfest, as do the German beer lovers in Yokohama. Sendai, the capital of the Tohoku region does their Oktoberfest a little differently, but the end result is more chances to drink--always a preferable outcome.

Before I introduce the expected activities of Oktoberfest, I want to inform you why Oktoberfest in Tohoku is something special. The event is not in October, it's not just one day, but a week long. Are your beer senses tingling yet? For over a week each June and September Nishikicho Park is filled to capacity by Japanese people and the international community, united for their love of beer from a distant land. Easily accessible via a five-minute walk from Kotodaikoen Station and admission free, there are countless chances to enjoy this afternoon and evening event.

Although undoubtedly not as large as the Oktoberfest events of larger cities, the modest-sized Nishikicho park still manages to squeeze in two beer halls, about a dozen storefronts selling drinks and food, and enough inside and outside seating that you can usually find a spot easily if attending with a small group.

German beers take center stage (in fact, only German beers are available) and there are many to choose from, particularly dark beers. One will cost 1000-1400 yen, with a 1000 yen deposit on the glass you will get back when you return it. For a large glass of imported German beer, I would say the price is reasonable. And not buying a beer at Oktoberfest certainly breaks some unwritten rule or German tradition. German food mainstays of bratwurst, sauerkraut, potatoes, ham, and more make a nice addition to your beer. A bratwurst plate big enough for two will cost 2000 yen, so those on a budget may want to eat at a nearby restaurant or grab some convenience store food. Equipped with food and drink, your next mission is to find a seat. Outdoor seating provides a cool breeze in the warmer months, while the smaller beer hall provides a more intimate setting. For those that want the full Oktoberfest experience, however, head towards the main beer hall and get ready to party--German style.

The main beer hall is a giant tent full of long tables stretching from the back all the way to a front stage. Several times a day a German band performs, exciting the crowd and encouraging everyone to drink more with cries of "prost," the German word for cheers. Now that the educational part of your trip is over you can enjoy singing German beer songs, clinging glasses with strangers and rocking out to the more rowdy evening performance, which also often includes English song favorites as well. Anyone looking for a good drink or general fun time should definitely check out Oktoberfest in Sendai.