Tokyo to Kyoto by Shinkansen Train

Everybody loves a bargain. The Japan Rail Pass is one example. With one week’s unlimited travel around Japan for 28,000 yen, you could save thousands traveling from Sapporo to Fukuoka and return. The reality is, most visitors don’t travel that much. Some might even struggle to go from Tokyo to Kyoto return, especially when you can fly into Tokyo and fly out of Osaka, or vice versa.

Discount Ticket Shops are a way to pay less than full price, even without a Japan Rail Pass, and even for one way tickets.

The Shinagawa discount ticket shop in Tokyo is about 3 minutes’ walk from the west gate. After leaving the station exit, you will see a taxi rank. Once you are past the taxi rank, cross the traffic lights and then turn left, and you will see it just before a small shrine. It is near the Shinagawa Prince Hotel, and if you are lost, I am sure the concierge will help you.

In Kyoto, the discount ticket shop called “Tokai” is also about 3 minutes’ walk. Leaving the central exit and walking north east, you will come to a taxi rank. Cross the traffic lights at Shikoji Street and it is to your right, being 1.5 blocks east of Kyoto Tower. If you walk past Dormy Inn, you have gone too far. Both shops sell everything from discount subway, JR, and plane tickets. For Shinkansen bullet trains, you can’t actually buy the ticket from the discount shop. You buy the voucher which you exchange for a ticket at the JR Midori-no-madoguchi ticket reservation offices with a green seat sign. When you exchange the voucher for the ticket, you need to have an idea exactly what time you want to depart, as they will give you a ticket with an exact departure time and seat number allocated to you.

The discount shop in Shinagawa is open from 10 to 7pm generally, so if you are traveling first thing in the morning it is best to get the voucher the day before. You can buy vouchers for travel that day or up to 3 months ahead. These vouchers are not valid in peak Japanese travel seasons, such as the New Year holidays. On the other hand, the discount shop in Kyoto is open from 9am.

Expect to save approximately 5 per cent off listed prices, like 12700 yen to Kyoto from Shinagawa or Tokyo. This includes the seat reservation fee which is highly recommended on the Nozomi trains which may be 100 per cent full. The advantage with the discount shops is that you can access the more frequent and faster Nozomi trains which depart every 10 minutes, or 3 times more frequent than the half hourly Hikari trains that JR Pass holders are restricted in catching. Of course if you decide early you have a greater choice of seats, especially for couples or groups wanting to sit next to each other. Otherwise you would be separated or the next train may be full.

The Nozomi trains are every 10 mins to Shin-Osaka though for cities further west it may be every 20 mins or you will need to change at Shin Osaka. There are separate smoking cars as well. The Nozomi train takes 134 minutes, while the Hikari takes 20 minutes longer. Car 1 is generally the Osaka / Hakata end of the train while car 8 is the Tokyo or Eastern end. I generally prefer to book a seat in cars 4 to 8, as it is closer to the subway entrance in Kyoto.

Discover a new way to explore the best of Japan by bullet train.

All trains, whether they are Nozomi or the slower Hikari or Kodoma trains are of the same stock, so it is not like the faster Nozomi trains are more luxurious. For trips less than 3 hours, like the one from Tokyo to Kyoto or Osaka, you are better off with an ordinary car seat, compared with the slightly more spacious Green car seat. The ordinary cars are in my opinion cleaner and newer than those on the French TGVs or the Eurostar trains. However, there is no buffet car, so buy your meal before you board. Otherwise, the roving crew comes by every 20 minutes or so, selling snacks, ice cream and hot coffee. There are also vending machines selling chilled Japanese tea and sports drinks for 150 yen, but due to the lack of demand they are thinking of phasing them out.

You need to hold on to your ticket, first to get through the entry gate, secondly when it is stamped by the conductor, and lastly when it will be taken at the exit gate.

There is not much scenery to speak off due to sound reducing walls placed next to the track. In Tokyo and Yokohama, you are more likely to see bland post war houses and industrial buildings, and likewise on the train itself, as the other passengers are mainly business people during the weekday. The sound of middle aged office workers snoring comes into mind, along with the sound of plastic bento wrapping being opened, as if you are in some large dormitory at night, it is very quiet with hushed conversation, so quiet that people voluntarily take phone calls in the door lobbies.

Keep an eye out though for Mount Fuji and some ocean glimpses between Yokohama and Nagoya. They don’t announce when the train is passing through these spots (maybe not to wake up the snoring workers). Chances are you will get a better view of Mount Fuji from the plane.

There is Wi-Fi officially however I could not find it. There are public telephones on every fifth or so car as well as super clean toilets, which has touch sensors for flushing and also nappy change tables. These facilities are very clean and well maintained and are a notch above even first class carriages on the Thalys trains in France. Also unlike these European trains all seats turnaround so you are always facing forwards. There are no video screens or other entertainment so being a book or a travel pillow. There is limited information in English on the overhead screens. If you understand Japanese there is more information including what station the train is passing through as well as service conditions on other lines and some news feed items.

Alternatively if you want to save time and can sleep easily the overnight train with flat beds from Tokyo will get you to Himeji in the Mornings, for which you need to double back to Osaka and Kyoto. At night you can board the Tokyo bound night train from Osaka

Luggage space is limited to cabin luggage so unlike airport trains large luggage may be difficult to store if the train is full otherwise you can keep large luggage next to you seat as the pitch and leg room is generous, something akin to premium economy seats, so even the middle seat is bearable. Even you have a lot of luggage I would still encourage you to catch the train as they get you point to point in the city center without multiple airport transfers which is the bane of aircraft travel.

Tips for getting a ticket on the Shinkansen Bullet Train:

There are at least two Midori-no-madoguchi or reservation offices with a green seat sign in Kyoto Station, where you can book reserved seats. There is one east of the central exit (street level) and one almost directly underneath. So if the one on the street level is too crowded then go to the one downstairs, as you could save 20 minutes of queues. This also applies to JR Rail pass holders who want to reserve a seat. They also provide timetable information. Officially only the one at the Central Exit can exchange vouchers, and only from 8:15 - 17:00, but sometimes if they are lenient they may let you exchange it between 5:30 and 8:15 am at the standard counters inside. 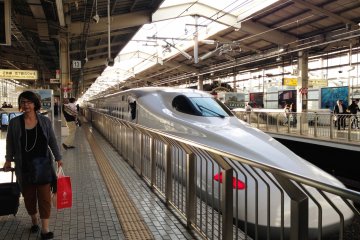 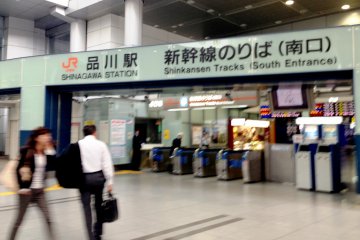 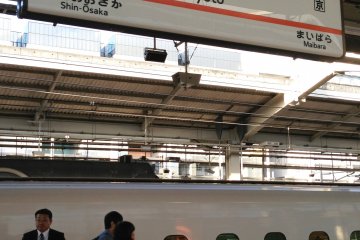 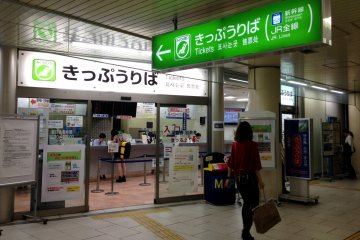 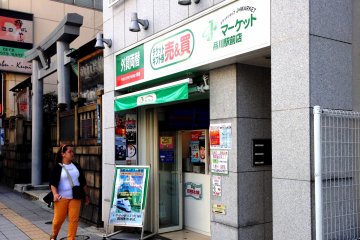 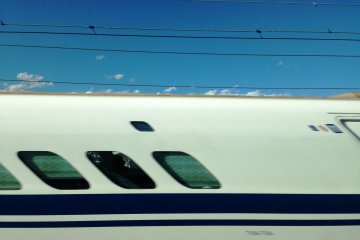 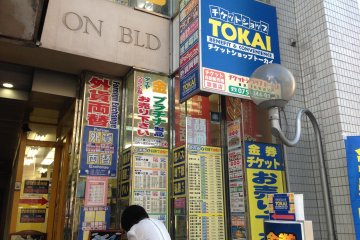 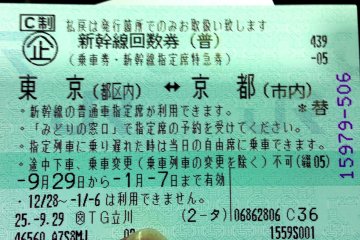 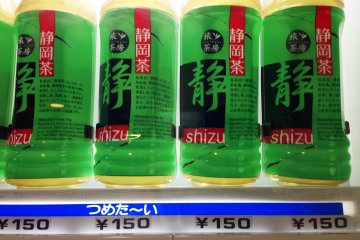