This guy brings manga to life at the talking theater. The Kyoto International Manga Museum gives an insight into the evolution of Japanese society, and at its heart, a celebration of storytelling.  (Photo: Bonson Lam)

Back to school for a lesson in animation

This guy brings manga to life at the talking theater. The Kyoto International Manga Museum gives an insight into the evolution of Japanese society, and at its heart, a celebration of storytelling.  (Photo: Bonson Lam)
Bonson Lam   Apr 03, 2014 - 5 min read

While manga is seen by some as a modern invention, it actually began in the 11th century by Toba Sojo with comic sketches of life as a Buddhist monk. It later took off with Hokusai, who coined the word 'manga' or “playful sketches” to denote some of his more humorous parodies.

At the Kyoto International Manga Museum, manga from its incarnation in the twentieth and twenty-first centuries can be seen, touched and read in all its glory. While officially a museum, it is more of a library, and visitors are encouraged to read the manga displayed, library style, from its “wall of manga”.

There are also drawing workshops to bring out the inner artist, as well as weekend sessions where artists can sketch a personalised portrait of you, cartoon style. On the other hand, only accredited journalists can take photos. The gift shop, on the other hand, has an excellent collection of manga prints and postcards.

Kyoto International Manga Museum is housed in a former elementary school, so as you walk past the walls of books, you can get a sense of its former life from the restored principal’s office. There is also a children’s library where you can take off your shoes and curl up on the floor with your favourite book. Its connection with a school is apt given the connection between manga and kamishibai, or paper drawing, from which manga derives many of its ideas and techniques from. For example, when you turn a manga page and there is a close up of a characters face, it is considered kamishibai style. Yokai or horror manga GeGeGe no Kitaro, by Shigeru Mizuki as well as Kamui Den by Sanpei Shirato, were originally Kamishibai artists.

In its heyday, over 750,000 children in Tokyo rushed to see kamishibai daily, with some watching it more than once a day. It was so popular that when Televisions were first introduced, they were called electric or denki kamishibai. These scenes of laughter and unashamed creativity are evocative of a more innocent time, when handmade paper puppets on bamboo skewers in an improvised cardboard box theater inspired hours of storytelling and entertainment. Many of these kamishibai stories would end at a dramatic point, and just like Arabian Nights; it would have its audience in suspense, creating the desire for them to come back tomorrow to watch the next episode. This was great news for the kamishibai artists as they could only make a living from selling candy to the audience. Those that bought candy got front row seats, so a popular series will guarantee standout candy sales.

Today, the museum tries to relive this excitement with its Japanese language Kamishibai show; bringing laughter to the young and young at heart. It would be great if there were more activities like this, for this museum is very much like a beautiful lady hiding behind thick spectacles in a library. If you make the considerable effort to understand manga, this is a gold mine waiting to be discovered. On the other hand, those who are dismayed by the walls of books may be tempted to give up after an hour here.

There is also over 5,000 manga volumes from France, United States, China and other countries around the world in their native language, though the strength is in the Japanese collection from the 1970s to 2005, mostly donated from a rental book store. A small number of these Japanese manga is also available in English. The ¥800 entry ticket allows re-entry during the day, so you could spend a whole day reading its extensive collection, and use the re-entry to take lunch at a café nearby, or stop by at the museum café. With over 300,000 titles, it can be hard to choose just one and the librarians and front desk team are more than happy to help you. The last thing you would want is to be reaching a dramatic turn of events at closing time, because like a kamishibai show, you will want to come back tomorrow, candy or not.

There are also temporary exhibitions on other applied arts and crafts, such as one on Japanese Tin Toys. Together with the permanent collection, the Kyoto International Manga Museum gives an insight into the evolution of Japanese society, and at its heart, a celebration of storytelling. It is a shame that the infectious community engendered by Kamishibai has now evolved to a bookish culture of solitaries reading manga. But there is hope, if the cosplay parties and the social interaction that it engenders is a sign of the future.

Outside the entrance is a small café, serving simple meals, where you can relax surrounded by artworks from anime and manga artists.

The Kyoto International Manga Museum is easy to get to by subway, being a level walk from Karasuma Oike, where the two subway lines intersect. 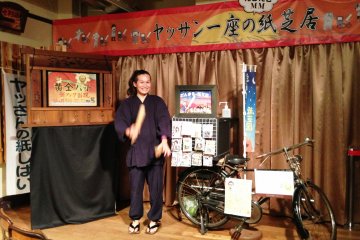 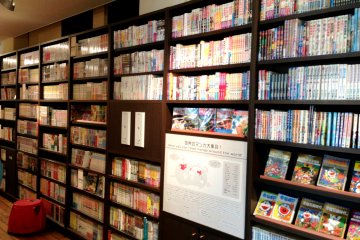 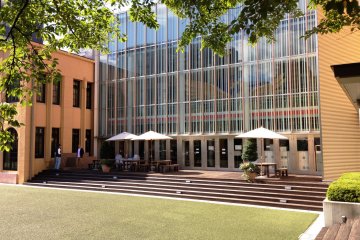 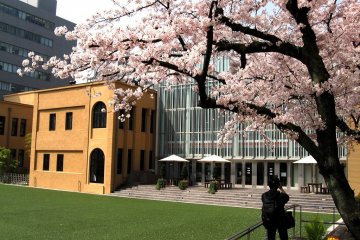 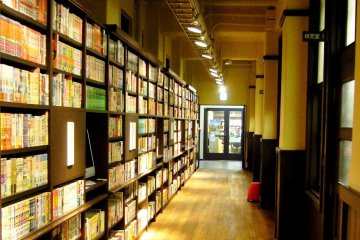