Hold on to your tray... the start of the slide (Photo: Peter Sidell)

A green hill for grown-ups and kids to relax on

As you take the Tokaido line west from Tokyo, the urban sprawl around Kawasaki and Yokohama slowly gives way to more greenery, especially as you get closer to Odawara and Hakone. Close to Ninomiya station there's Azumayama Park, which has a mix of scenery and a handful of activities for kids and grown-ups alike to enjoy.

Once you get up the first flight of steps from the entrance, a bunch of paths branch out left and right and ahead; I found thick foliage and high leafy trees, occasional splashes of color from flowers in bloom, webs belonging to evil-looking spiders, flitting butterflies and buzzing dragonflies everywhere. For amateur naturalists, a lot of the plants are labeled, though the explanations are in Japanese with only the Latin species name given for the non-natives. Though the station was only a few minutes away, being completely surrounded by trees and insects made me feel like I was far out in the countryside.

When I got to the top I found a broad, attractive grassy lawn sloping down to the trees, with a few wooden tables near the bottom that are great for taking a break or having a picnic lunch at. Sitting at the very summit is a round observation deck which commands a fine view of the forested hills around, and of the sparkling blue ocean as you look out into the Sagami Bay and down the coast towards Izu; there are a few pairs of pay binoculars if you want a closer view. On a warm day it's nice to lie back here and enjoy the cool breeze off the sea, and this time I took the rare chance to walk barefoot across freshly watered grass.

It's also here that you'll find the pay booth for a big fun curvy metal slide. For a hundred yen you take a wooden board about the size of a tray to sit on, then zoom down along the metal rollers in gratifyingly noisy fashion, turning and looping as you go. I saw one family arrive at the bottom and their little girl couldn't stop laughing, giving me a big genki "Konnichiwa!" as she scampered back up to the top for another go.

There are also more sedate spots to sit and catch your breath along the way. Just off one of the lower paths is a simple, austere shrine, with a single small wooden building nestling peacefully among the greenery; the steps up give a good view north through the trees. Then a little way down the hill from the slide there's a larger, more atmospheric shrine, where neatly trimmed bushes line the stone path to a main building enfolded by trees. The simple design and the natural surroundings, with few sounds but the breeze and the birdsong (and sporadic chirruping of cicadas), create an air of tranquility that's guaranteed to calm a restless mind.

Heading from the lawn at the top towards the central exit, you'll come to a rabbit pen, where the kids will enjoy watching the bunnies lollop around and wiggle their noses. And one final surprise was waiting for me before I left: as I was walking down the path to the exit, I was stopped in my tracks by a meter-long snake slithering across the path not two yards in front of me. Presumably it wasn't venomous but it was still a reminder of how, as Japanese parks go, Azumayama is really quite untamed. 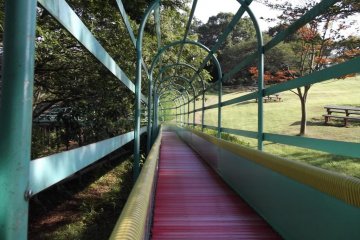 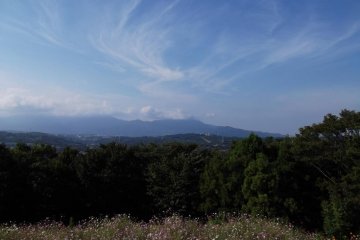 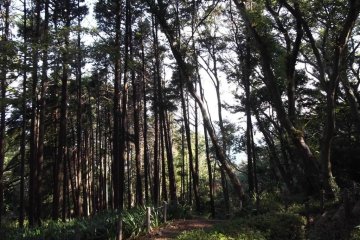 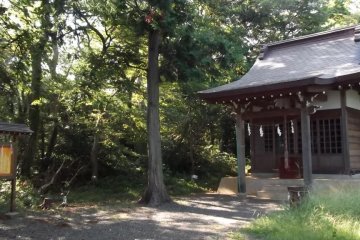 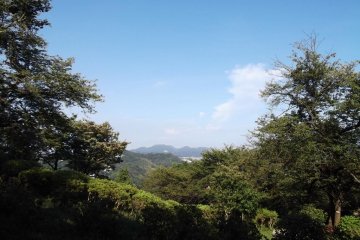 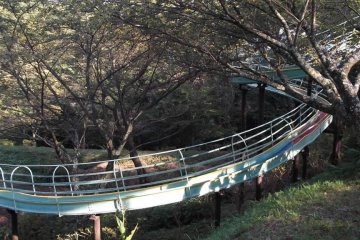 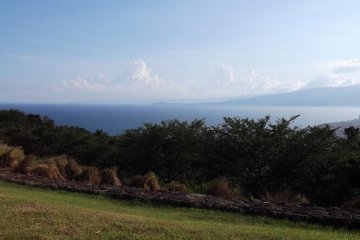 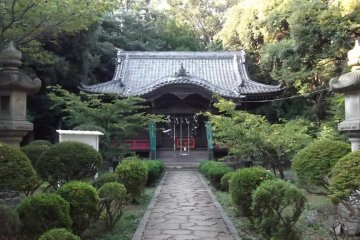 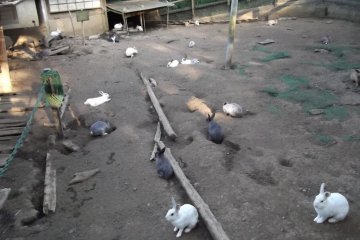