Explore the birthplace of Japan

Tucked away in the Japanese countryside rests an island overflowing with historical landmarks and cultural gems. This place is called Awaji Island, and it's less than two hours from Osaka.

To get here, drive across the Akashi Kaikyo Bridge, a two mile suspension bridge, the longest of its kind in the world. That's about where state of the art technology stops on your trip to Awaji. Once you get off that bridge, you are immediately immersed in century old traditions. In fact, according to Japanese folklore, Awaji Island is the birthplace of Japan. As the story goes, the gods Izanagi and Izanami stirred the sea with a spear, and when they lifted the spear from the water, a drop of brine fell from the blade and hardened atop the ocean waves. Thus, Awaji Island was born. Soon Izanagi and Izanami descended upon its shores, to further develop the land of the rising sun.

Far from the futuristic glamor of Tokyo, Awaji is suspended in a time where traditional values like, būshido, the unwritten code of honor and loyalty, continue to govern the locals. As a result, you can't help but feel a more simpler way of life, whilst walking past cattle barns and onion farms. Now that I'm back in the States, I hope to give you a peak into some of the best places in Awaji where you too can begin to understand a very different Japan, away from Anime, Hello Kitty, and robots clustered in big cities. A place where you're bound to venture where no other foreigner has been before. Without further ado, here is my top ten list for Awaji Island activities. If you would like to add anything to the list, please leave a comment below.

Up in the mountains of the southern town of Naha, over 200 monkeys roam free. Visitors are sure to get some up close shots of these little guys. Just make sure you don't stare them in the eyes.

Conveniently located on the main road in Higashiura, Sennenichi has been brewing there own house sake for generations. Based across from the town's elementary school, I biked past this place everyday, but never had the chance to take a tour.

Since you're on Awaji Island, it's only fair you check out a beautiful shrine dedicated to the Island's (and for that matter Japan's) founder. It's said to be the oldest shrine in the country, but there's no specific date on record. A beautiful stone walkway way lined with lighted pillars and a few over arching torii gates mark the grand entrance. It's not uncommon to witness priests carrying out traditional shinto ceremonies. It's also a popular spot for businessmen to pray for success, and students to pray for good grades. This is sure to be a very unique Japanese experience, as you will witness how Japan blends religion into their daily lives.

7. Hike up to Sumoto Castle

The stone walls fortifying the rebuilt Castle have held their ground since the early 1500's. The castle itself was rebuilt in 2013, and although small in stature, is well worth the fun twenty-five minute hike, or five minute car ride. From the mountain top, visitors can look across Osaka bay and see three different prefectures: Hyogo, Osaka, and Wakayama. Be sure to dip your feet in Sumoto's hot spring foot bath near the base of the small mountain. To get there, drive under the yellow and red Sumoto Onsen sign, parallel to Ohama beach. Then, take the second right at the small statue of a women holding a bucket, drive under torii gate and the foot bath is on your left (there's also a map at the bottom of this post).

- Hundreds of black pine trees dot the (almost) white sand beach on Awaji's south western shoreline. It's cleaner than most Japanese beaches, which isn't saying much. Ironically, for being an island nation, relaxing at the beach is not as regular an occurrence as it is in the States. Be sure to stick around for magnificent sunsets, as the strip of road along the coast is not called, "Sunset Boulevard" for nothing.

- In the wake of the Great Hanshin Earthquake in 1995, one of Japan's most talented architectures, Tadao Ando, designed this magnificent modern feeling garden. Constructed alongside a resort conference center, lush gardens overflow the hillside with an endless staircases carved out of the side of the hill. Don't worry, there's an elevator too. Interestingly, much of this area's land was removed and shipped across the bay to build artificial islands, like Kansai International Airport. If you can’t get enough Ando, simply drive five minutes south to see his modern temple, Honpokuji; an underground temple below a glimmering reflecting pool.

4. Sail through the Naruto Whirlpools

In a narrow straight connecting the Pacific Ocean to the Inland Seto Sea, powerful whirlpools swirl twice a day. The difference in water levels from each sea can reach extremes of almost five feet, creating the fourth fastest moving straight in the world. If you would like to get up close and personal, visitors can board a guide boat to snap closer pictures of the whirlpools. Be sure to look for the, "Yes Onion Yes" vending machine located outside the nearby restaurant and gift shop. This brings us to a good time for me to mention that Awaji is famous in Japan for their onions. You will see them hanging to dry all over the island.

I stumbled upon this horse farm while biking in the mountains on sunny spring afternoon. Many guests come from off the island for lessons. Spend an afternoon traversing through mountain passes and wading through calm ocean waters on a horse. It turned out the one of the horse trainers was my next door neighbor. That solved the mystery of who was snoring so loud through my apartment's thin walls.

2. Walk through Hanasajiki Garden, and feast on ice cream and burgers

I'll be the first to admit that gardens are usually never near the top of my tourist attractions list, but Hanasajiki (Thousand Flower Garden) is bursting with vivid colors that beautifully carpet Awaji's northern hillside. From the gardens, visitors have a grand view of Osaka Bay, and on clear days, even Osaka City itself. Make sure to try the seasonal soft serve ice cream, like "biwa" (loquat) in autumn, and sakura flavor in spring.

I can't recommend Hanasajiki without directing you to the best burger joint on the island, conveniently located just 2 minutes north up the street. The place is called, Awaji Country Garden. But the big sign is in Japanese (淡路カントリーガーデン). Unlike the other Awaji Island burgers, this guy is not made with shredded beef. Instead, guests get one thick and juicy patty topped with sweet caramelized onion rings and a secret burger sauce. Now would be a good time to remind you that the world famous Kobe Beef cows reside in the Awaji hillside. The burger is unbelievable. I biked up a mountain and sweated through my T-shirt on a chilly spring day just for this burger. Okay, so maybe I only recommended this garden for the nearby burger joint, but the flowers are still beautiful.

After a full day of exploring Awaji Island, you'll need a bit of rest and relaxation. Luckily, Awaji is blessed with a number of onsens. However, none command a view as scenic as Matsuho-no-Sato, perched in the northern hills over looking the two mile Akashi Kaikyo Bridge. The bridge is lit for a few hours starting at dusk, and for five minutes on each hour, an enchanting rainbow pattern of lights reflects off the water and fills the sky. The best way to enjoy the light show is from soaking in an outdoor onsen.

I live on Awaji Island and teach English through the JET Program. I love experiencing Japanese culture and exploring new parts of this beautiful country. Hanging out on www.awalkinjapan.wordpress.com 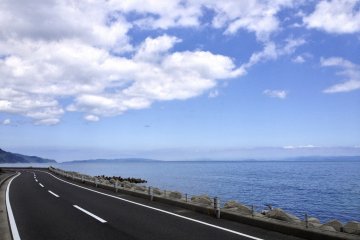 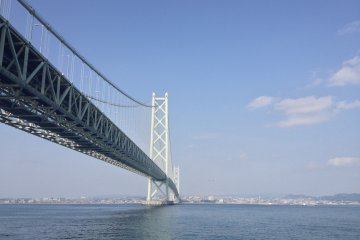 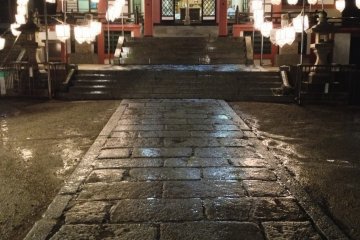