I don't really know where it came from. Maybe all the 'Beware of the bear' signs written in Japanese (I assume that was the general gist of them), or the desire to be like a jingling elf with my bear bell on, but seeing an Ezo-Higuma, the native brown bear of Hokkaido, was top of the list this past spring. Luckily I have awesome people in my life, so we boarded a boat heading up the Shiretoko Peninsula.

Shiretoko derives from Ainu language (Indigenous people of Hokkaido) 'sir etok' meaning 'End of the earth'. The National Park of the same name covers 386.3km2 of the North East Peninsula and is home to the largest population of Ezo-Higuma in Japan, along with a wide variety of plants and other animals. Much of the National Park is inaccessible due to limited road access and hiking being strictly controlled by authorities. Particularly during the height of bear activity in spring. The boat tours operated out of Utoro on the North side of the Penninsula provide almost guaranteed bear sightings. The two main companies running tours are Fox Crusiers and Kamuiwakka Crusining. We went with the later on a two hour cruise to the supposedly aptly nicknamed "Bear Beach" and back for what I think was a pretty reasonable ¥5,500 per person.

Prior to our boat trip we spent a day in the car. Spring time in Hokkaido like anywhere is a hive of activity. Thus turning Shiretoko's gravel access road into a stunning drive, the Sea of Okhtosk twinkles out to your left whilst the vast mountains of green stretch upwards and outwards to your right. However it is a good idea to keep eyes on the road if you're behind the wheel, Ezo-Deer are everywhere and National Parks probably won't appreciate picking up road kill.

Taking a boat tour may not sound like the most adventurous activity for the Bear Grylls types among you but it is after all the safest way to see potentially unpredictable animals who are big, fast and have really sharp claws. Plus the coastline is incredible, rock formations that would be a geologists dream, waterfalls, the lot. It felt like I was cruising round Jurassic Park.

"Kuma, Kuma, Kuma!" they screamed. Luckily I had predicted this may well be the signal for a bear sighting as the entire tour was in Japanese, shame to miss out on a lot of information but hey what you going to do. We were fortunate enough to hear this cry twice on our cruise, witnessing two mothers and their cubs. The response being identical each time, beady eyes scanning the shoreline for movements, questioning rock or bear five times a second. It never took long to see her, a Mexican wave of "woah" ensued, closely followed by the typically Japanese "Kawaii!" as the cub stumbled around behind her.

My initial reaction in these situations as a photographer is to jump straight behind the lens and fire shots off, which I definitely did do. But as I handed the camera over to my girlfriend to appreciate the zoomed in view of these incredible creatures I sat back and just watched. A certain bear related scene form BBC's Planet Earth has been on repeat in my head ever since. 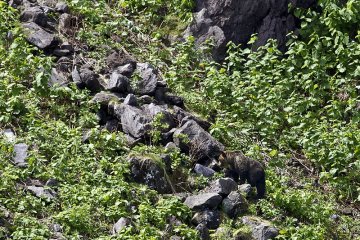 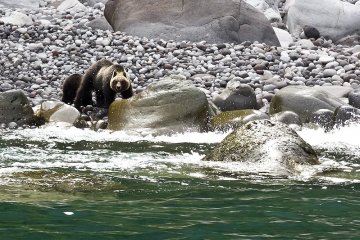 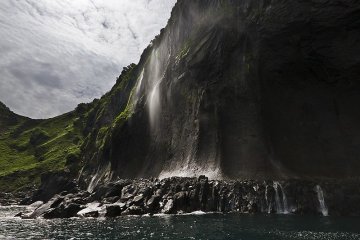 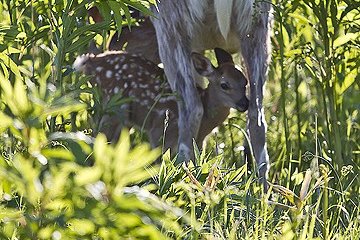 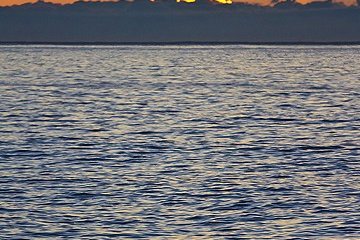