Hiroshima: Top Ten Things to Do

From unimaginable loss to sheer strength

Hiroshima Prefecture lies on the southwestern side of Honshu, Japan’s main island.

The prefecture’s southern coast meets the Seto Inland Sea and extends into the water with a collection of little islands. The most popular of these islands is Miyajima as it is the site of Itsukushima Shrine and the iconic torii gate, both of which appear to float in the sea. In the north of Hiroshima, the Chugoku mountain range stands tall, creating a picturesque landscape of forests and river gorges. The prefecture’s capital, Hiroshima City, is solemnly recognized as the first city bombed by a nuclear weapon during World War II (WWII). This unfathomable event forever marked the region’s past and is represented throughout the city in its museums, parks, and sculptures, all with messages of peace and remembrance.

Without further ado, let's explore some of the top things to do in Hiroshima Prefecture.

Hiroshima Peace Memorial Park is an expansive 120,000 square meters of nature in the city’s downtown area. Prior to WWII, the site of the park was the political and commercial hub of Hiroshima City. After the bombing, Japan decided not to rebuild the area, and instead created a solemn memorial of peace and hope. Today, the park holds numerous memorial statues and buildings, including the Atomic Bomb Dome, Hiroshima Peace Memorial Museum, Hiroshima National Peace Memorial Hall for the Atomic Bomb Victims, Children’s Peace Monument, and Cenotaph for A-bomb Victims.

Nearly centralized in the park stands the Cenotaph for A-bomb Victims. This stone arch monument shelters a vault, which holds a registry of all the known names of people who died from the atomic bombing, regardless of nationality. Inscribed on this vault is the message, “Let all the souls here rest in peace, for we shall not repeat the evil." The impactful monument connects visitors not only to the lives lost but also to the park’s message of remembrance as it perfectly frames the Peace Flame and distant ruins of the Atomic Bomb Dome.

The Children’s Peace Monument is dedicated to Sadako Sasaki, who was exposed to nuclear radiation from the atomic bombing during WWII and tragically passed away when she was only twelve years old. A statue of Sadako stands atop a three-legged dome pedestal with her arms outstretched to the sky, holding a large origami crane. Before her death, she strived to fold one thousand paper cranes, which are Japanese symbols of longevity. Japan erected the monument to memorialize the children’s lives lost during the war and as a message for a bright and peaceful future.

On August 6, 1945, the United States dropped the first atomic bomb on Hiroshima City during WWII. The Hiroshima Prefectural Industrial Promotion Hall stood near the epicenter of the explosion, yet miraculously remained partially intact. The ruin’s vacant interior and crumbling stone walls are a tragic reminder of the brutality of war and humankind’s capacity for destruction. Today, the city aims to preserve the structure’s post-bombing appearance in solemn remembrance of the lives lost and ultimately, as a symbol of world peace. The impactful building was designated as a UNESCO World Heritage Site in 1996 and stands in the city’s Peace Memorial Park where visitors can observe the remains and stand in its overwhelming presence of loss, tragedy, horror, and hope for a united future.

Hiroshima Peace Memorial Museum sits across from the Atomic Bomb Dome in the Peace Memorial Park. The museum houses information about Hiroshima’s history before and after the atomic bombing during WWII and aims to educate visitors and humanize the infamous event and after-effects. The museum documents the unimaginable horrors through items found after the bombing: a tricycle, a lunchbox, a school uniform, all once mundane objects, whose meaning now tells of the instantaneous devastation of human actions. Photos line the walls, honestly displaying the brutal aftermath. The solemn building also contains testimonies from bomb survivors (called hibakusha in Japanese). These difficult stories are an integral part of the museum and lead its mission in eliminating nuclear weapons. Despite the unfiltered displays of war, the museum never wavers from its core message of remembrance, education, and future peace.

Daisho-in Temple is located on Miyajima island, which is just off the prefecture’s southwestern coast. This important temple was founded by the famous Buddhist monk, Kobo Daishi, who is the founder of Shingon Buddhism. Daisho-in Temple is the first location where Daishi practiced religion on Miyajima island. Nestled at the base of Mount Misen, the collection of buildings is decorated by thousands of unique statues surrounded by a tranquil forest. When visitors enter the temple, they have the opportunity to perform a Buddhist ritual. Centered on the temple's stairs are rotating cylinders inscribed with Buddhist scriptures, or sutra. As guests ascend, they can rotate these wheels, which is said to have the same effect as reading them. Once inside the temple, visitors can admire sights such as a cave with 88 Buddhist icons related to the temples of the Shikoku Pilgrimage and a sand mandala made by visiting Tibet monks. For a truly mystical experience, travelers should visit the temple in autumn when the site’s many Japanese maples turn a vibrant red.

Hiroshima Castle, situated in Hiroshima City, was constructed in the 16th century. The castle was built on a plain in the center of the city, which contrasts the typical hilltop or mountaintop castle. Despite being level with the surrounding buildings, Hiroshima castle still commanded respect with its towering presence, moat, and stone walls. Unfortunately, the atomic bomb during WWII destroyed the castle. In 1958, Japan reconstructed the historic building, giving people the opportunity to experience its grandeur. Hiroshima Castle stands tall above the treeline as a historic beacon among the city’s modern skyscrapers. The castle’s partially wooden exterior, white detailing, and gray roof tiles transport visitors to the imperial past. Inside the castle, guests can learn about Hiroshima’s and the castle’s history, as well as information about Japanese castles in general. After perusing the area’s history, guests can visit the top floor, where they are treated to panoramic views of the surrounding city and Ota River.

Rising above the water, stands Itsukushima Shrine, one of Hiroshima’s most alluring attractions. The centuries-old Shinto shrine is a collection of buildings just off Miyajima Island’s coast. The structures and connecting walkways were built on pillars just above sea level, giving it the appearance of floating on the sea during high tide. Apart from the main shrine, stands the famous torii gate in the Seto Inland Sea. This bright red gate captures the attention of visitors globally with its commanding presence. Isolated from the main shrine, the gate stands tall in the shifting waters with the island’s mountainous nature as a backdrop. Traditionally, visitors would pass under the torii gate by boat before entering the shrine, and today people still follow the sacred practice. During low tide, visitors have opportunities to walk up close to the massive gate.

Miyajima Island was historically worshipped as a god, which is why past inhabitants built the shrine in the water so as to not disturb the sacred land. Today, guests can walk through Itsukushima and explore wonders such as its prayer hall and noh theater. At night, the shrine closes to foot traffic but is illuminated with a warm glow, creating a mystical scene. Visitors can observe this nighttime view from Miyamjima’s shore or from boat tours that run every night.

Tomonoura is a port town located in Fukuyama City, along the Seto Inland Sea, and benefits from being less touristy than some of the prefecture’s other destinations. This hidden gem of Hiroshima is an expansive collection of Edo-period architecture, which lends to the town’s quaint charm and rustic fishing aesthetic. In the town’s historic center, cobblestone streets lead visitors through traditional houses. Tomonoura is a must-see spot for Studio Ghibli fans as it inspired the setting of Miyazaki’s Ponyo. Among the fishing town’s many attractions, Fukuzen-ji Temple and the Joyato Lighthouse are standout examples of the Edo-period influences. Tomonoura’s museums are also worthy stops for those looking to learn about the town’s history and folklore. While in town, you can grab a bottle of the area’s unique Homeishu liqueur. This blend of local herbs is said to help with fatigue and feelings of coldness. After exploring Tomonoura, visitors should also check out destinations in Fukuyama, which is the second-largest city in the prefecture.

Mount Misen is the tallest mountain on Miyajima Island at 535 meters and has been regarded as a sacred landmark by Buddhist followers for centuries. Kobo Daishi is said to have first practiced Buddhism on the mountain while on Miyajima, and thus founded Daisho-in Temple. Although primarily located at the mountain’s base, the temple also extends upwards with Misen Main Hall and Reikado erected closer to Misen’s summit. Reikado is a wooden building known for housing a sacred flame that Kobo Daishi allegedly lit himself. The flame was recently used to light the Peace Flame in Hiroshima Peace Memorial Park. Aside from the mountain’s religious significance, Mount Misen also is a natural treasure with magnificent views at its peak. Visitors have opportunities to trek up the mountainside using one of three hiking trails or can opt to ride a ropeway. As you ascend the mountainside, whether it be by foot or ropeway, you cannot help but be enveloped by the tranquil and spiritual scenery. Once at the top, visitors are treated to panoramic views of the Seto Inland Sea and even Hiroshima City on clear days.

Escape from hurried city life to the tranquility of a traditional Japanese-style garden. Shukkei-en Garden, located in Hiroshima City, was completed in 1620 and translates to “shrunken scenery garden.” The Edo-period garden is cleverly landscaped to look like mountains, valleys, rivers, bamboo groves, waterfalls, and forests, but in miniature forms. A carp-filled lake in the center of the park holds numerous areas of land that resemble islands. Plants pruned to look like tiny trees sprout from these islands and decorate the surrounding grounds. The pond’s stillness creates a mesmerizing reflection of the area’s natural hues and organic forms. Visitors can view the expertly crafted scenery from a path around the perimeter of the park or in one of the garden’s many tea houses, which hold tea ceremonies year-round. Walk slowly and enjoy.

Onomichi is a port town that extends into the Seto Inland Sea from Japan’s main island of Honshu to three smaller islands. The town follows the islands’ sloping landscapes, creating a blanket of close-knit buildings and forests. Onomichi is most famous for being the starting point of the Shimanami Kaido, which is a bikeable bridge that connects Honshu to Shikoku, another of Japan’s islands. The bridge, which goes across six islands to reach Shikoku, attracts thousands of cyclists yearly with its magnificent seaside views and easily navigable path. Do not bike away from Onomichi too quickly though! The town itself holds memorable destinations and activities.

If you want to explore the area on foot, the town offers two walking tours called the Temple Walk and The Path of Literature. The Temple Walk takes guests through 25 of Onomichi’s temples, with Senko-ji being one of the more popular stops. The Path of Literature commemorates artists and authors born in the town. The area also contains interesting museums such as the Hirayama Museum, Onomichi Motion Picture Museum, and Onomichi City Museum of Art. Another popular attraction is the Mount Senko-ji Ropeway, which visitors can ride to the top of the mountain for spectacular views of Onomichi and the Seto Inland Sea. Aside from the panoramic views, the mountain’s summit is also home to Senko-ji Park, which is an especially beautiful spot when the area’s cherry blossoms are in full bloom.

What do you think of Hiroshima so far? Amazing, right? You may have worked up quite the appetite just getting this far —fortunately, Hiroshima has some of the best food in Japan. Be sure to check out Hiroshima's top eats! 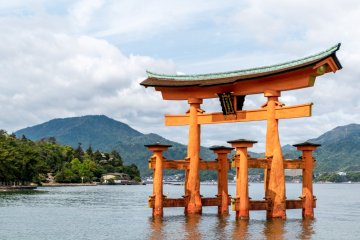 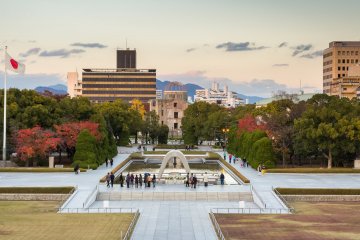 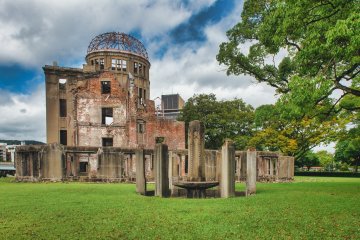 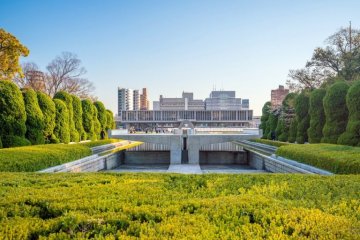 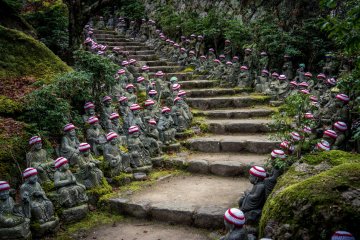 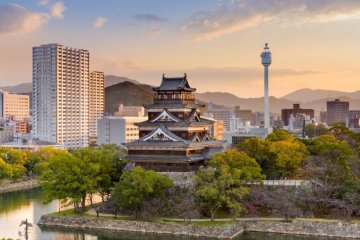 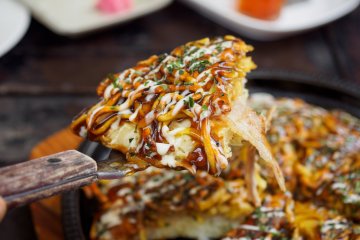 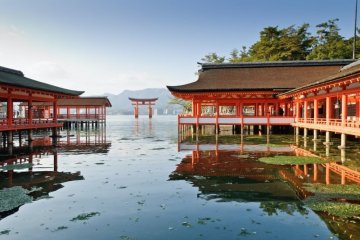 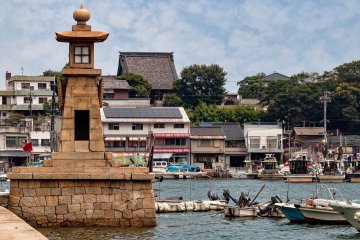 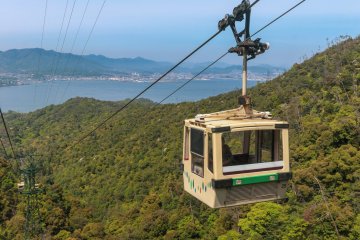 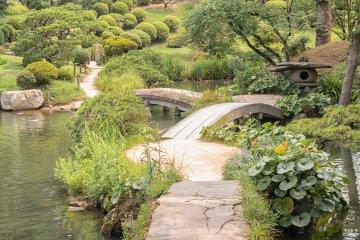 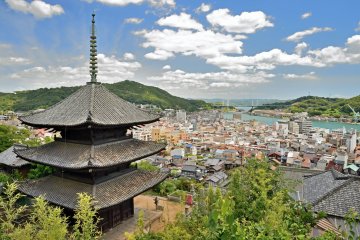 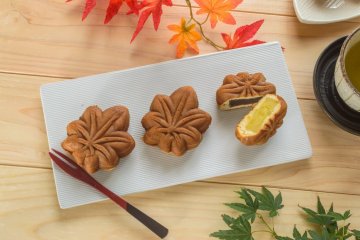