Plenty of temples, festivals and even an amusement park, Inagi City is also known for its connection with modern anime as well as its long history as a pear cultivating region. Here is an introduction to some of the history and landmarks of Inagi City and how to reach them.

Set within the lovely Shiroyama Park, Fine Tower offers up some pretty decent views of the surrounding region. A solid flight of steps takes you the tower entrance where, six floors above the ground, the 360 degree open-air platform provides some good camera shots. Opening on Sundays and public holidays means timing is all important.

A 15-minute walk from Minami-Tama Station on the JR Nambu Line.

Famed anime mechanical designer Kunio Okawara was born in the city. Scale and life-sized statues and sculptures of many of his characters can be found throughout the city, particularly around stations. Great for anime fans, these characters include Yatter Wan, Gundam, Zaku and the 4m-tall Scopedog monument.

Direct access from Inaginaguma and Minami-Tama stations on the JR Nambu Line.

Having irrigated both rice and pear farms in the region for over 300 years, the Omaru Channel is now well known for the cherry blossoms and hydrangeas lining its banks. Winding its way for some 3km, the channel offers a pleasant walking or cycling opportunity to explore the city and its immediate surrounds.

A 3-minute walk from Minami-Tama Station on the JR Nambu Line.

Inagi City is famous for its pears and the Seigyoku Orchards offer visitors the chance to experience some top quality fruit. Said to have been originally brought in from Kyoto, the pears here have been cultivated since the late 17th century. The best time to visit is from August through to October.

A 7-minute walk from Inaginaganuma Station on the JR Nambu Line. 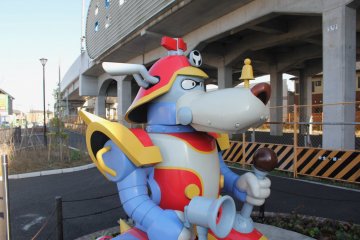