Satisfying the itch for traditional Japan

Dominated by the presence of an American military base, the area of Fussa City still finds time to satisfy the itch for traditional Japanese sightseeing. The city's temples and shrines feature some fascinating views as well their own points of history and heritage. Here is an introduction to some of the temples and shrines of Fussa and how to reach them.

Seated by the Tama River is the majestic Chotoku-ji Temple. Its sanmon gate, bell tower and Kannon statues, combined with the stately grounds, really do combine to create a dignified image for this 1000-year old location. The temple even offers tips and advice on local sightseeing, taking full advantage of the nearby river views.

A 15-minute walk from Fussa Station on the JR Ome Line.

Established by the local government in the late 19th century and then later upgraded by local donations, Fussa Shinmei Shrine is dedicated to fortune and success. An attractive main shrine building is complemented by torii gates with views of Mt. Fuji, chozuya ablution wells and, during the blooming season, some lovely ume plum blossom trees.

A 5-minute walk from Fussa Station on the JR Ome Line.

A lovely shrine, Kumagawa Shrine features a handsomely built main shrine building considered to be the oldest in the city. Throughout the grounds adding personality to the shrine can be found statues of the shichifukujin, the Seven Deities of Fortune. An flea market is held here on the second Sunday of each month.

An 8-minute walk from Kumagawa Station on the JR Itsukaichi Line.

Founded at the turn of the 14th and 15th centuries, Seiganin Temple is a wonderfully elegant Buddhist temple home to a classic atmosphere of peace and serenity. Helped along by bell tower, koi carp-filled spring water pond and well-maintained Japanese garden, the temple is a real photogenic find.

Ten minutes from the West Exit of Fussa Station on the JR Ome Line. 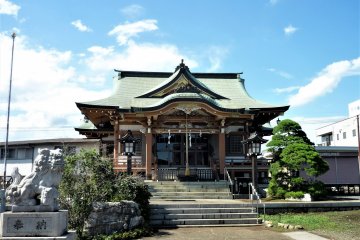