I left Hakata Machiya Folk Museum just before dusk. Turning back the way I'd come, I noticed lots of people – young couples, mostly – streaming in the opposite direction. I wheeled around and fell in line beneath the torii of Kushida Shrine, sometimes affectionately called “Okushida-san,” - home to three tutelary deities, students pray for academic success here. It was examination time.

My sight obscured by the ceiling of the entrance gate, I could only hear them at first – wingbeats. A cacophonous frenzy above the courtyard. As the line crept forward, I could see the birds – sparrows? A murmur of starlings? - in tight formation, settling in the branches of one of the three trees in the shrine and alighting to the next moments later. This enormous, high-decibel rush transpired until the sun set, exactly. Out of the birds' silence emerged the monotone chanting of a priest inside – it was a beautiful, solemn moment, a reminder that all moments are unique, no matter how joyous of mundane. While in Japan, I've often thought, “Even when I return, I'll never experience this again”. I savored the voice, raising a few pitches before falling silent, too.

A few days after January 1, the shrine was decked out, as were worshippers. Women in kimono shuffled by indigo banners bearing three white crests, the insignia seen all around the shrine; the folded white paper “gohei” above every doorway were accompanied by mandarin oranges and symbolic greenery. Students pored over their “omikiyo,” fortunes for the coming year, under the lovely glow of paper lanterns.

Carved into marble at the water basin for making ablutions (the “chozuya”), an image of men pulling a huge float. Kushida Shrine is the end point for the Hakata Gion Yamakasa Festival, an annual 5k race during which men from each of Hakata's districts compete for fastest time and best float in the heat of July. Outside the main shrine towers one of these traditional floats, intensely colored and full of characters such as horsemen and priestesses.

Imagining the men pulling the float, weighing nearly a ton, with only their strength of their bodies and will of their minds, I knew I had to visit Kushida Shrine some summer in the future. For a completely new, and unrepeatable, experience.

Find out more about Kushida Shrine. 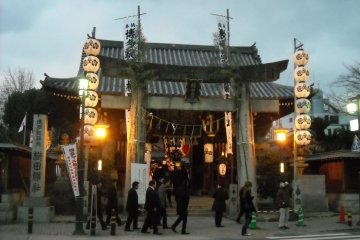 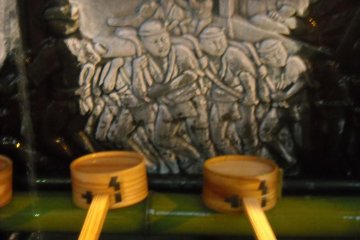 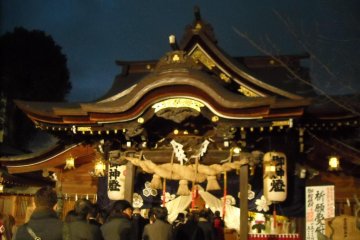 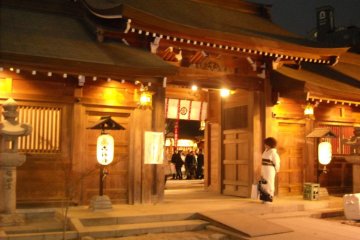 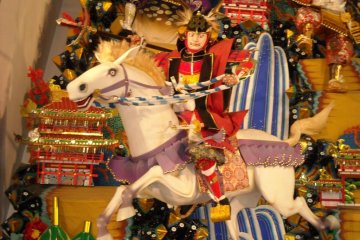