The number one city for night views in Japan

One of the benefits of the large and compact urban populations in Japan is the beauty of its night views—and Kitakyushu ranks number one in Japan’s New Three Most Spectacular Night Views. Choose from mountaintop lookouts to tower observatories, massive bridges, special events, and castle views—or experience them all. Here are five of the best.

The view from the Mt. Sarakura observatory is the pride of Kitakyushu, topping the New Three Most Spectacular Night Views of Japan and earning the title of the “Ten-Billion-Dollar Night View.” This is a must-see.

If you’re not up for hiking the 622 meters (1,866 ft) to the top, catch a ten-minute ride on the glass-enclosed cable car and slope car combination (barrier-free).

Check the time for sunset in advance. If you arrive while it’s still daytime, you’ll have a fantastic view plus a chance to see the extraordinary transition as the sun sets and twilight merges into night and the glow of the city sparkles forth with the intensity of scattered gems.

Take your time to enjoy this striking panorama. You’ll be looking at all of Greater Kitakyushu and the northern coastline at once, from the Onga River to the west (left) to the Kanmon Strait to the east (right).

It’s quite a sensation experiencing the vastness of the scene from a mountaintop. That alone is enough for some of the visitors to the observatory. You can get a decent photo worth sharing with a modern cell phone camera, even at night.

But some visitors stay mesmerized, soaking in the city lights to see what details can be made out. As the sky meets the horizon at the Hibiki-nada Sea, the floating lights of squid fishing boats dot the dark water. You’ll see lines of lights on the land indicating highways, baseball stadiums and other sports complexes, and the large angular void of Dokai Bay with its distinctive red Wakato Bridge. There are intense glows coming from the downtown areas of Kurosaki, Yahata, Wakamatsu, Tobata, Kokura, Mojiko, and even Shimonoseki across the water. The area’s many factories also contribute large strokes of light to the landscape. To the far right, you can make out the Kanmon Strait and the huge bridge that connects the major islands of Kyushu to Honshu.

Rail service up the mountain begins at 10:00 in the morning and the last ride leaves at 21:20 from April to October and 19:20 from November to March. It’s closed on Tuesdays (except for holidays) and during the first week in June; it may also be closed occasionally for maintenance. It costs 1,230 yen for an adult round-trip ticket.

The building at the top contains a restaurant and drink vending machines. Note that the mountaintop is usually windier than the city below and the temperature will fall after sunset, so you might want an additional layer of clothing.

Mojiko Retro, the renovated port of Moji, provides multiple outstanding night views. In the evening, check out the magnificent Neo-Renaissance Mojiko Station and take a walking tour past the many historic brick-and-stone buildings that are stylishly illuminated. Head over to the Kaikyo Plaza Mall for shops, restaurants, and harbor views.

Near the harbor pedestrian bridge, look up to the tallest building in the area, Mojiko Retro Highmart, and take in the whole scene from the observatory at the top.

The massive bridge linking Kyushu to Honshu makes for another impressive night scene. The best angle is from Mekari Park Observation Deck 2, but there’s also a view from water level at Mekari Shrine that’s closer to the ships passing through the strait.

At the end of the day, if you find yourself back in Kokura, the downtown area of Kitakyushu, visit the castle complex after sunset to see the main tower, castle walls, and Kokura Castle Japanese Garden with its samurai mansion all lit up. Go to the top of the mall next to the castle for an overview of the keep and grounds.

Events and festivals boost the city’s reputation for night views. At the Tobata Gion Festival in July, traditionally dressed participants parade huge floats with hundreds of lanterns through the streets. The castle complex, too, has special light-up events.

Many areas of the metropolis are illuminated with special displays during the Christmas season, including Kokura Station. Several fireworks displays brighten the sky in summer.

The superb night views of Kitakyushu have been noteworthy for decades, but the city keeps making improvements. Finally, in 2022, it took first place in a poll conducted by YAKEI (Night view) Convention & Visitors Bureau among night view tourism specialists, leading to widespread civic and public recognition. If you want to get out and enjoy some phenomenal urban night views, Kitakyushu is Japan's ichi-ban. 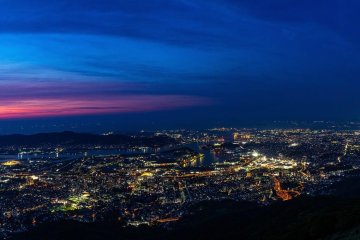 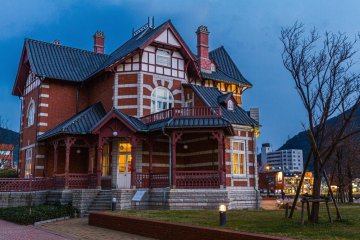 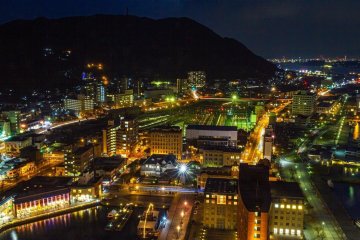 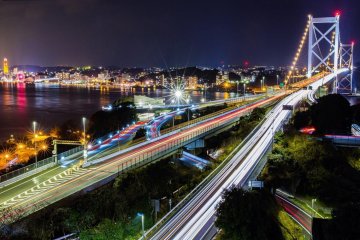 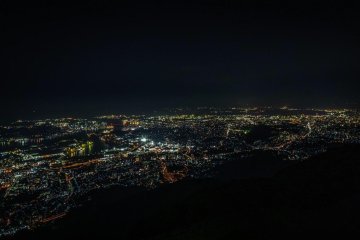 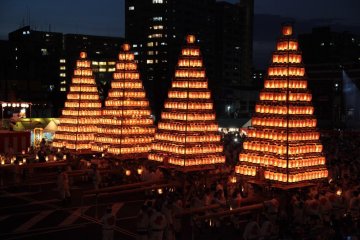 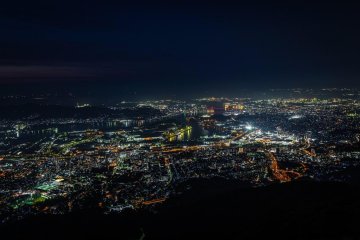 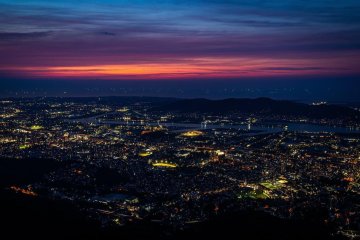 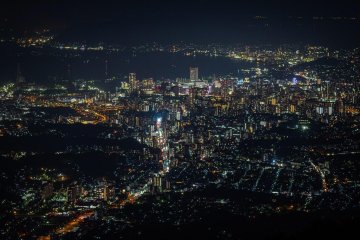 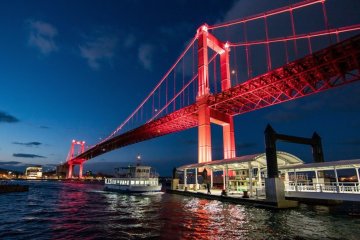 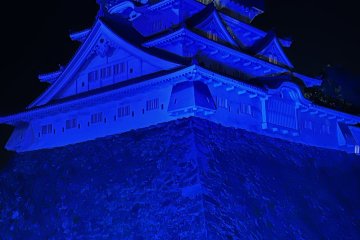