A calm moment along the Oirase Stream (Photo: Mandy Bartok)

Hiking Along the Oirase Stream

Japan is replete with beautiful natural scenery but arguably some of the finest I have experienced is along the Oirase Stream in Aomori Prefecture on the northern tip of the island of Honshu. A relatively flat hiking path traverses the valley, introducing visitors to waterfalls and wooden bridges as well as unique and notable rock formations. Despite its length, it's one of the easier paths I have ever hiked in Japan, which makes it an excellent outing for visitors of any age.

The entire valley stretches for quite some distance, but most visitors concentrate their efforts on a 14 kilometer stretch of trail from the Yakeyama bus stop to the edge of Lake Towada. The beginning of the trail sees fewer visitors, as it winds past the Oirase Keiryu hotel and through the woods. The trail does alternate sides of the road, so if hiking in the summertime when the road is open to public vehicles, make sure to pay attention when crossing the road!

Around Ishigedo, a unique rock formation that boasts a story about a witch, the trail becomes more congested. This is one of the main places for drivers to park along the trail and the rest stop here also features bathrooms, drink vending machines and a small museum on the flora and fauna of the forest.

From Ishigedo, the trail leads mostly through the woods, oftentimes passing quite close to or next to the road but thankfully not crossing over it too often. A series of waterfalls make for excellent waymarkers and pit stops. The Kumoi Waterfall is one of the most impressive and is set back from the road in a quiet glen. It is the highest waterfall along the trail and tumbles down the cliff face from a height of over 20 meters. Several kilometers later near the opposite end of the trail, the Choshi Waterfall is equally impressive but much different in appearance, more closely resembling a horseshoe falls.

Local buses run through the gorge at least once or twice an hour, making it easier for tired hikers to skip portions of the trail or for drivers to easily return to their car at the end of their walk.

Find out more about Oirase Stream. 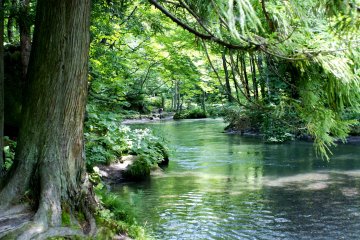 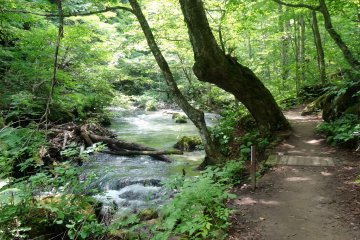 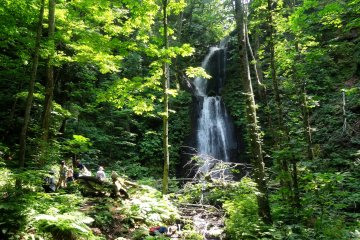 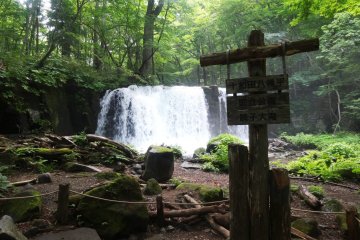 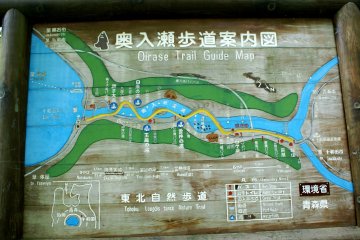